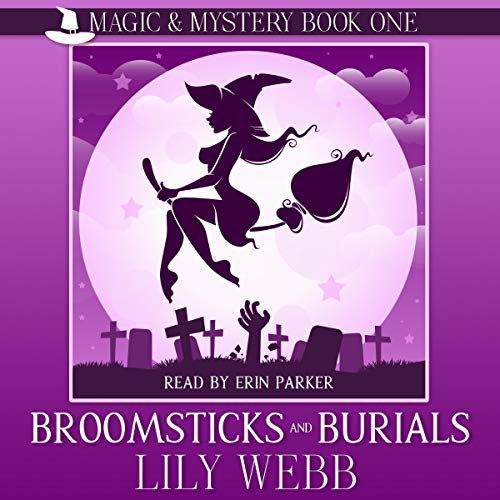 Reporter Zoe Clarke's life has lost its magic. So when she gets a job offer in the middle of nowhere, Zoe jumps at the chance to make a name for herself only to find her new home is teeming with magic and paranormal beings - and those aren't its only secrets.

During a heated election for head witch, the most powerful position in town, Zoe’s predecessor was buried alive - and accusations are flying faster than broomsticks. Despite her editor’s orders to leave the story alone, Zoe can’t resist.

From the front-running witch with a secret to the mysterious vampires pulling strings in the shadows, Zoe knows the truth is just under the surface. So after she discovers she has rare telepathic abilities, Zoe realizes she's the only one who can keep digging.

Will Zoe’s powers lead her to the murderer and the scoop of a lifetime? Or will they send her to an early grave?

Broomsticks and Burials is the first book in the Magic and Mystery series of witch cozy mysteries. If you like witty witches, catty talking cats, and magical murder mysteries, then you’ll love this lighthearted debut in Lily Webb’s spell-binding series.

Buy Broomsticks and Burials to start solving the mysteries of Moon Grove today!

What listeners say about Broomsticks and Burials (Paranormal Cozy Mystery)