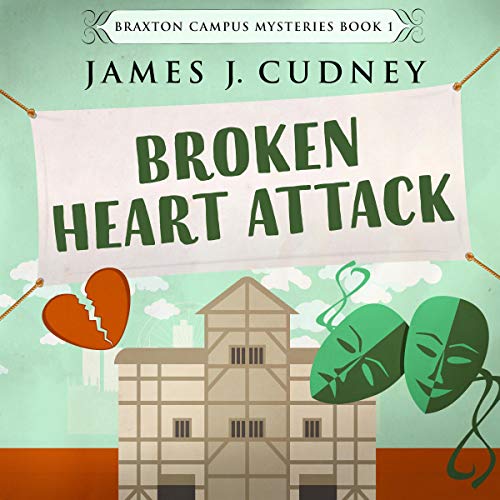 When an extra ticket becomes available to see the dress rehearsal of King Lear, Kellan tags along with Nana D and her buddies. But when one of them dies of an apparent heart attack in the middle of second act, Nana D asks Kellan to investigate.

With family members suddenly in debt and a secret rendezvous between an unlikely pair, Kellan learns that the Paddingtons might not be as clean-cut as everyone thinks.

But can Kellan find the killer, or will he get caught up his own stage fright?

What listeners say about Broken Heart Attack: Death at the Theater

An exciting and fast past murder mystery

Broken heart attack is the second book in James J. Cudney's successful Braxton Campus Mysteries series. In this book we are immediately drawn back into Kellan's world in the introductory scenes where he has agreed to assist his feisty and determined grandmother, Nana D, in running for mayor and is trying to rally her team of elderly friends into constructively assisting with her campaign. Nana D is quick to notice that her friend Gwendolyn Paddington, matriarch of the extremely wealthy Paddington family, is unwell and at loggerheads with her selfish and uncaring descendants. After accidentally overhearing Gwendolyn engaged in a telephonic conversation with an unknown family member, Kellan agrees to investigate the strange circumstances surrounding Gwendolyn's ill-health on behalf of Nana D. We are quickly reminded about the death of Kellan's wife and his life as a single parent to their daughter who has quickly settled into her new life in the way that only very young children can. His struggles with his "boss" at the Braxton Campus faculty where he works as a lecturer are re-introduced creating a lot of sympathy in the reader for Kellan, who is a really nice chap and the kind of man everyone should like. James Cudney is, in my opinion, excellent at creating believable characters which the reader really cares about. When Gwendolyn unexpectedly dies at a theatre performance, following a public argument with her estranged son during the interval, Kellan is swept into the investigation into the unnatural circumstances surrounding her death. Who could be responsible? One of her spoiled children, all of whom have failed in areas of their lives and need money as a result? One of her selfish grandchildren, who seem to actively dislike her? Or could it be her male nurse who has a history of his own? Kellan throws himself into discovering the true facts of her death, while avoiding conflict with the town's female sheriff, who does not like any competition, especially from Kellan, and unexpected and unsettling confrontations with his dead wife's mother. This is an exciting and fast past murder mystery with believable and interesting characters which will keep you flipping pages until the thoroughly satisfying ending. Luckily, there is another four books already available in this series so you don't have to wait to dive back into the world of Braxton Campus. The narrator has a strong America accent which is 100% correct for this story which is set in the USA. For me, however, I did find is slightly distracting in some parts as I am used to British English. This did not detract from my enjoyment of this story as an audio book.