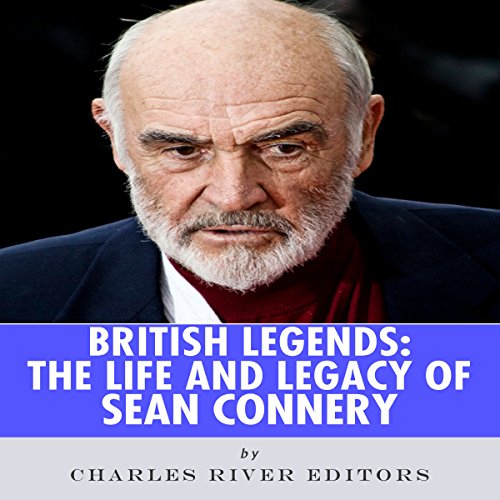 British Legends: The Life and Legacy of Sean Connery

A lot of ink has been spilled covering the lives of history's most influential figures, but how much of the forest is lost for the trees? In Charles River Editors' British Legends series, listeners can get caught up to speed on the lives of Britain's most important men and women in the time it takes to finish a commute, while learning interesting facts long forgotten or never known.

Perhaps no actor has been able to retain their popularity into old age as well as Sean Connery. Despite retiring in 2006, Connery remains a venerable figure who continues to receive accolades for his handsome virility and status within the Hollywood elite. After all, in 1989, just shy of his 60th birthday, Connery was feted by People magazine as the Sexiest Man Alive, and in the years that followed, Connery was awarded with even more lifetime achievement awards, including being named Sexiest Man of the Century by People magazine in 1999. As an actor, Connery won an Academy Award for his performance in The Untouchables (1989), and he has been awarded Golden Globe and BAFTA awards as well. Based on these designations, one can reasonably place Connery among the ranks of the most acclaimed Hollywood actors of all time, a figure whose critical reputation only grew as he matured.

Considering his personal acclaim as an actor, it is perhaps surprising that despite his status, most of the films in which Connery has appeared are not particularly acclaimed. Indeed, scanning his filmography, viewers finds very few films that have been showered with any significant awards, and even the role that brought Connery to fame, the James Bond franchise, initially received a largely lukewarm critical reception.

What listeners say about British Legends: The Life and Legacy of Sean Connery