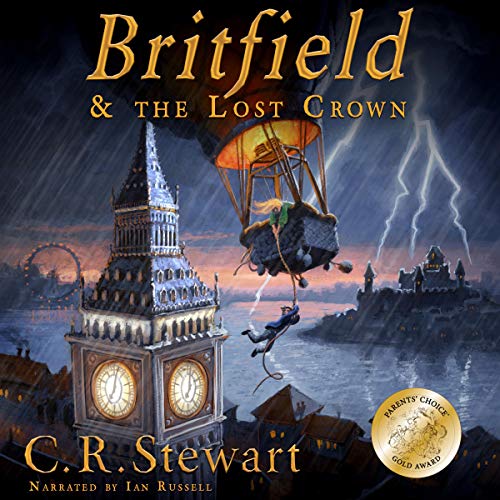 Britfield and the Lost Crown

Britfield and the Lost Crown

Tom has spent the majority of his life locked behind the cruel walls of Weatherly orphanage, but when he learns that his parents might actually be alive, Tom is determined to find them. Together, with his best friend Sarah and armed with only the word “Britfield” as a clue to Tom’s mysterious past, the two make a daring escape. Now, they are on the run from a famous Scotland Yard detective and what appears to be half of the police officers in England! The hunt is on, but will Tom and Sarah be able to evade capture long enough to solve an even bigger conspiracy that could tear apart the country?

Multiple Award-Winning Britfield and the Lost Crown by C.R. Stewart and narrated by Ian Russell (nominated Best UK Male Voice - One Voice Awards 2019), is the first book in a thrilling seven-part series based on family, friendship, loyalty, and courage that is written for pre-teens, Y/A, and listeners of all ages. Britfield and its heroes, Tom and Sarah, take listeners on an epic adventure as they travel across England. With its stimulating language and stunning historical and geographical asides, Britfield engages the listener from the very first moments and doesn’t let go until it reaches its exciting conclusion!

"Narrator, Ian Russell carries listeners along for a thrilling, fast-paced adventure about two kids, Tom and Sarah, who run away from a bleak Yorkshire orphanage. Pursued by a determined police detective, they face even more danger when Tom discovers a clue about his ancestry that may link him to the royal family and a plot to eliminate his bloodline - including him. With varied accents and voices, Russell transports listeners to England and brings each character to life. As hot-air balloon crashes, several narrow escapes, and a white-knuckle chase through London ensue, Russell ramps up the pace of his narration, making the danger all the more palpable." (Audiofile Magazine)

"At the beginning of C. R. Stewart’s marvelous new audiobook, Britfield and the Lost Crown, 12-year-old Tom and his best friend Sarah are wards at the Weatherly Orphanage, where children are forced to work endless hours without reward and brutally punished for the slightest infraction. When Tom learns that his parents, whom he thought were dead, might still be alive, he and Sarah make a daring escape from the orphanage, embarking on a dramatic adventure and becoming the key players in an intrigue involving the British Prime Minister, the Archbishop of Canterbury, and a highranking official of the royal court. Always just a step ahead of their pursuers, the two friends wind their way through the hallowed halls of Oxford University, hide among the hidden corridors of Windsor Castle, brave the darkness of the underground catacombs of St. Paul’s Cathedral in London, and escape by hot-air balloon across the English countryside. From start to finish, Stewart’s novel is packed full of colorful - and often colorfully named - characters: the Grievouses, the greedy, sadistic proprietors of Weatherly Orphanage; brilliant, indefatigable Inspector Gowerstone; kindly, heroic Dr. Randolf Churchhill Hainsworth III; diminutive, bespectacled conspiracy theorist, Dr. Beagleswick; and the Queen’s bloodthirsty Superintendent, Philip, and his evil henchman, Caldwell. Tom and Sarah’s adventures are masterfully narrated by awardwinning voice actor Ian Russell, who provides memorable voices to all the tale’s characters. Along with its relentless action and suspense, Stewart’s novel provides young readers with a wealth of information about British culture (with frequent references to literary classics) and the history of the Monarchy and the Anglican Church. Highly recommended, Britfield and the Lost Crown will appeal to both young readers and their parents." (Parents’ Choice Foundation - Gold Medal Award)

This was a pleasant story to listen to.

This was a pleasant story to listen to. The Narrator was just great, loved how he did the female Scottish accent. There was enough twists and turns to keep me highly entertained.

I always go into children’s books expecting to see a lot of stuff, where I just shake my head at. Just them moments where you go ‘really?’ I found with this story, I never did. It felt realistic enough, the children used their common sense. They did their best.

want 2B this author when I grow up-Aspiring writer

It's a delightful story that makes you cry and laugh, so well-written and what a great narrative tour of London.