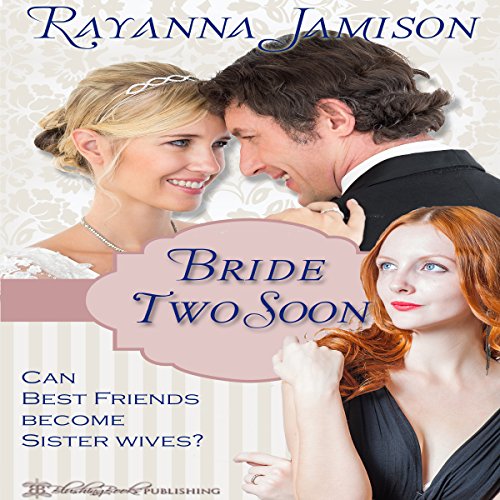 This is a story of love and life-long friendship against the odds.

Can they remain friends? Will jealousy get the best of them? Will their husband be able to fix the problem with a good old fashioned spanking, or two?

Would have loved a longer book

Great story and actress, however thought it would have been longer. Very interesting subject to learn about.

This audiobook was provided by the author, narrator, or publisher at no cost in exchange for an unbiased review courtesy of Audiobook Blast." I really enjoyed the storyline and now I'm looking forward to the next in the series to find out what's next and that is how you should feel about a series, so good job

Was this book based on a True Story?

What disappointed you about Bride Two Soon: Can Best Friends Become Sister Wives??

Was this book based on a True Story?

This book was... Not my cup of Tea.
I'm sorry but there were a couple of times were I almost did not finish the book, especially in the beginning.

The story line reminded me of someone being "brain washed" without even realizing it.

It also felt like something was missing in the beginning.
The story just basically started with Molly having a fit.
There wasn't much background given about the community that they were living in, nor
was the all important "Dream" explained in detail.
Considering how important the Dream is to the already married men,
a little explanation should have been given.
How many wives can one man have within the faith?
Can they divorce and remarry?
Do the kids know which mom is their biological mother?

I did not understand Molly's reaction to the news of a new wife.
I mean, she lives in a polygamist community and even though she was only married for a short time,
she knew that eventually there could be a new wife.
Her reaction was over the top and juvenile.
I tried to be open to the story but all of the adults acted like children, actually worse.
If she really had an issue with Ben marrying someone else,
she should have put her foot down or left him, plain and simple.
And, she never once asked Ben NOT to marry Beth, I kept waiting for it.

I had an issue with the "Spanking" and discipline by Ben.
Molly threw a temper tantrum when she found out Ben was to marry her best friend, Beth.
Like I said, Molly overreacted to the news, however, it was Ben's response to Molly that had me Ticked off and Gritting my teeth.
He told her to:
"Go get your brush and wait for me in the corner".
Wait a minute, What ?!?
WTH!
Then to make matters worse, Molly Allows him to spank her.
And then, right after, the husband takes off his belt and further beats and whips her with his belt.
To add insult to injury, he even had the nerve to act like the whipping was affecting him more than Molly being whipped.
Oh, please!
If it is bothering you so much, then don't do it Ben, you JA!!


So, like I wrote before, Was this story based on a True Story?
If not, I did not see the point.
This was Not a Love Story.
There wasn't anything Romantic, or Sensual, or Intimate, or Redeeming at all.
I did not like any of the characters.
Ben did not deserve One wife let alone Two.
He is a newly wed only by a few months and he JUMPS at the chance to marry Beth.
Ben was selfish and stupid, he did not speak to Molly about her feelings before marrying Beth and
then wondered why he was having so many problems with his wives after the fact. Duh Dumb Ben, just.. Duh.
I did not like the way that he spoke to Molly, instead of talking to her about a second wife,
he is more concerned with house hold duties:
"Be a good girl and get your chores done".
Really?!?

The two women who were best friends for years were mean and hateful to each other.
I could understand Molly's anger but not Beth's.
Beth is selfish too.
Why couldn't Beth wait awhile before mentioning her dream.
She could have given them time to be newly weds.
If Beth had the "dream", why wouldn't she talk with Molly, her best friend, first, or how about talking with Molly and Ben???
No, Beth, sneaks around behind Molly's back and tells the bishop or reverend.
And then she acts as though Molly just needs to suck it up.

I repeat, Molly never once asked Ben not to marry her best friend Beth.
And, up until the wedding day, I thought that he wouldn't go threw with it.

The ending was a bit abrupt.
I can't believe after all of the animosity that Molly had towards Beth that it was all solved when Ben spanked Molly and Beth
at the same time. Really?
That was all that it took for everyone to get along, a group spanking?

And.. again, I had a big issue with the spankings.
When I thought that Ben was done with the spankings, he would just use his belt, drawing out the "punishment".
People treat their dogs better than the way Ben treated his wives.
I didn't like the way that Ben spoke to either Molly or Beth:
"Come here Molly girl"
- like he was calling his pet.
or
"Are you going to heed my warning little girl?".
- I don't know how old Molly and Beth are, but I can't believe they allowed Ben to treat them the way that he did and spanked them repeatedly.

If you want to read a short story about "Intimate" spanking, try:
One Naughty Winter Night by Ruth D. Kerce.


**I am all about equality in relationships,
so my question to the Author is...
Are the women allowed to have more than one husband?
Does Polyandry exist in their community?
If Molly wanted, could she take another husband?


In all honesty, I could not rate this book higher.
I did NOT like:
1.) That Ben took a new wife while still being a newly wed and his blatant disrespect and disregard of Molly.
I kept hoping that Ben would change his mind about the 2nd wife all the way up until the last minute.
Now, that would have been romantic. Ben taking a stand for Molly and NOT marrying anyone else.
2.) The constant spankings for no reason except that he "could" because the women allowed.
When Ben spanked the women, it was not to be "Intimate" or sensual.
No, he did it because he perceived it as a slight of his authority. The women are supposed to respect and obey him
but he does not offer the same in kind.
3.) The women were brain washed into accepting Ben, his behavior, his selfishness, and their lifestyle.

I would be willing to read another story by this author but
Only if it does Not involve spanking and polygamy.

Note:
"This audiobook was provided by the author, narrator, or publisher at no cost in
exchange for an unbiased review courtesy of Audiobook Blast."

What could Rayanna Jamison have done to make this a more enjoyable book for you?

This is not a subject I would normally read. I received this book in exchange of a honest review. Multiple wives, or sister wives. I do have to say the book was very remarkable and interesting. A unique perspective on the subject and I would read more of the series. It showed nothing but love and family.

Didn't care for this story line

The best thing that I can say about Bride Two Soon is that it was an interesting book. I didn't like the whining characters or the story line. Nothing was realistic.
I was given a copy of this audio book in exchange for an honest and unbiased review.

To much punishment for me

Not so good seemed to be a lot of punishment.
"This audiobook was provided by the author, narrator, or publisher at no cost in exchange for an unbiased review courtesy of Audiobook Blast."

Would read reviews before I purchased this book.

Let me start by saying that I have received this book free of charge from the author narrator for publisher for a honest review
This was a very confusing and uncomfortable read for me. Don't get me wrong the author is a good writer her characters were very well written and developed. It is the subject matter that I had a problem with. This book, in my opinion is about nothing but spousal
abuse disguised as corrective spanking. There was no reason that I could see for the spousal abuse in this novel.
If you enjoy a book about women being spanked and abused for no discernible reason this is the book for you.

I'm rating this one a solid 2.5 stars. First the good:

I very much enjoy breaking up serious reads with some light, guilty pleasure reading and that is exactly what Bride Two Soon is. The writing is good, the book flowed easily and the character descriptions were great. I could very easily imagine this polygamist household.

Now for the not so good: I enjoy reading about polygamy. I think it's because I grew up close to a few compounds and it intrigues me. This wasn't the issue, I take no issue with reading about alternative lifestyles but I don't think the author did much research on polygamy. There were so many problems with the way they were presented. I'm not saying all polygamists live by the same rule, I'm just saying that most follow a certain level of standards. Polygamy was founded because there were more men than women and they wanted to populate the earth with God's folk. The polygamist trio in this book hadn't even been trying to start a family and that is like polygamy rule #1. There were others but I don't need to list them all.

Then there's the ugly: why the spanking? This was not a sexual book at all. The spankings weren't even sexual... And if you take that out the only thing you are left with is spousal abuse. Hitting your wife as "punishment" is abuse.

An alternate view to marraige

I would flesh out the background of the community more. How did this group come about and do people move into the group easily?

What was most disappointing about Rayanna Jamison’s story?

As mentioned above, fleshing out the characters and background of the town, it would help to explain the belief system of the people living there.

Which character – as performed by Rita Rush – was your favorite?

I did enjoy Molly and Beth Anne a bit. Ms. Rush was able to make them each their own people.

I did like what I heard but I was looking for more ....