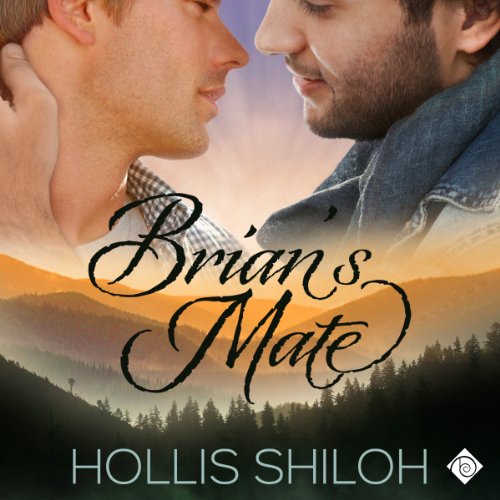 Brian is the alpha of the least impressive pack of wolves at the whole Moon Ceremony. When a human is discovered in their midst, he bonds with the man to save his life.

Luke doesn't know about all this wolf stuff, but he's starting to develop feelings for the gentle man who rescued him. Both Brian and Luke expect to quietly dissolve the bond later. But feelings intervene, and some bonds are not so easy to cast aside.

Building a life together as alphas will take love and hard work - especially when new wolves keep inviting themselves into their lives.

What listeners say about Brian's Mate

The best I can say about this book is I didn't "hate" it and I finished it. First off it is told in the storytelling form where the reader is told most of the info instead of having a POV from one of the MCs. I'm usually OK with that, but it prevents the reader from really identifying with the MCs because they are so arm's length. Second, it really is all over the place and has WAY too many characters with absolutely no or very little backstory on any. It is really just a story about a shifter pack and how it grew. Brian and Luke get together via insta love, as shifter are prone to do, then really nothing else happens. The theme is suppose to be how Luke's (Brian's Mate) became the "heart" of the pack, which is sweet, but a little boring. The narrator does an OK job, not really bad, but nothing special. Not worth a credit, maybe a sale for a sweet comfort read.

When I get a book to review, my first and foremost priority is honesty. Integrity is my friend and I want to keep our relationship tight. So after listening to five hours of this book, and they were long hours, I was left with... very few positive things to say.

Where do I start? This book has a terrible case of insta-love, one of my biggest no-goes. It takes a very skilled author to pull off insta-love and Hollis Shiloh didn't manage it here. The relationship between Brian and Luke was awkward and stilted at best, so the jump from "hello"---> "love" was sudden and unwelcome. In terms of the chemistry between Brian and Luke, well, I didn't feel any.

I happen to really enjoy paranormal books, shifter books in particular, but this shifter world was... yeash. These shifters were so tame! They bought their meat from a grocery store, didn't fight, and didn't do much of anything, really. The world was lackluster and left me wondering why the author wrote a shifter book in the first place. I like my shifters large and in charge, not meek.

In addition, the plot never seemed to go anywhere. It was rambling and unfocused. The writing also had too much telling and too little showing for my taste. I felt numb to these characters. Even the love scenes did nothing for me.

I also wish the author had left out some more... indelicate... details. I did NOT need to know that Brian could smell some woman's urinary incontinence pads. TMI, man.

Lastly, I can't write a review of an audiobook without a comment on the narrator. I did not enjoy the narration of this book. It was overacted and all of the characters sounded exactly the same. It felt campy and it was difficult for me to listen to.

As you can see, this book was a miss for me.

*Copy provided by the publisher in exchange for an honest review*

I am pretty picky about my m/m romance...I need at least a decent story with the smex...and the smex needs to be good...especially in a paranormal book. So this was ok...but not a keeper!

Maybe a sale...not good enough for a credit or buy...

What made the experience of listening to Brian's Mate the most enjoyable?

The concept of the story. A thriving and growing pack of shifters compiled of the misfits and outcasts that no one else wanted, until now.

What other book might you compare Brian's Mate to and why?

Sometimes. It wasn't the best I've heard, but definitely not the worst. Overall Cannon represented well.

It was and I did.

Brian is probably the most unassuming Alpha wolf ever. He inherited his pack upon his father’s death as the eldest son, and the pack still holds to small numbers. Just Brian, his brother, sister in law and nephews. Brian is an artist, a sort of free spirited loner who makes good money, but gives the majority of it to support wolves that don’t have a pack or a home. He would love to find a mate and have a family, increase his pack, but as a gay shifter he realizes that probably isn’t in the cards for him. That is, until he meets Luke.

During the annual Moon ceremony, Luke unknowingly stumbles onto pack land and, by law, is about to be killed. To save the adorable, sad man with scared eyes, Brian claims him as his mate. What starts out as an arrangement of sorts quickly becomes something more for both the Alpha and his new human mate. Luke is scared, defiant and sexy all at the same time and Brian enjoys nearly every minute of it. But will Luke want to stay mated to him once the ceremony ends, and the threat on his life is no longer hanging over their heads?

This story was totally cheesy, slightly predictable and yet, absolutely adorable and so much fun! Brian and Luke become the Alpha’s of one of the strongest packs there is, a pack full of misfits and outcasts. They have half wolves, gay wolves, homeless wolves... any wolf that either doesn’t have a home or isn’t wanted or treated right in their current pack for any number of reasons, including being gay, is accepted and fully embraced into their pack. This unlikely coupling of Alpha wolf and human, two gay men that thought they’d never find a husband, much less a family, become the head of a large and loving pack. And in a lovely little twist, Luke the only full human member of the pack becomes the heart of them all, his spirit holds them together.

This is my first audible with Stone Cannon, and while I’ve heard better, I’ve heard worse as well. At times it seemed like he was just reading off his grocery list, completely void of emotion. But other times he would dive right into the character and the situation at the time. I think he has promise to become a great narrator, he just needs to find his niche. Overall though this was just a fast, fun listen that I’ll probably listen to again.

If you are a fan of light hearted romance, shifters and cheesy love stories then grab a copy of this one. It will leave you with a smile on your face.

I am very conflicted about this story. Overall it was a very cute and wonderful story and I was never bored. I adored all the characters. But at the same time, it felt like a lot of the time Luke was a woman and not a man. That the author wrote a story about a Brian and a woman, then at the last minute changed the name to Luke and changed she to he. Even Stone Canon, the narrator, made his voice more feminine a few times when Luke was speaking or thinking. At times it felt rushed and I believe some things should have been explained a little better specially some of the new pack members. Even with all that it was still a wonderful story, I loved that it wasn't so much about Brian and Luke, but about how they built a life, family, and pack together.