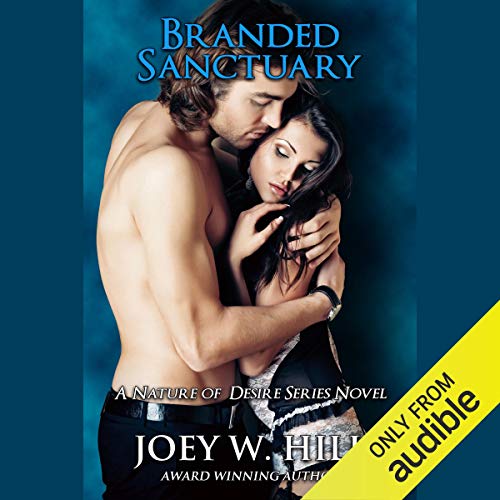 Though Chloe and Brendan met several months before this story begins, it took Chloe that long to overcome her emotional defenses and call him. At 3 in the morning. This erotic romance begins with Brendan becoming Chloe's knight in shining armor and introducing her to the sexual world of dominance and submission. Branded Sanctuary is the seventh book in Joey W. Hill's Nature of Desire Series and it can be a standalone novel or read subsequently to Ice Queen and Mirror of My Soul. Maxine Mitchell captures Chloe's emotional transition well as the arousing sensuality of the physical scenes - even when they're just transmitted via phone sex.

Chloe has always been a creature of joy and laughter. Since a brutal attack nearly a year ago, the trauma she experienced has gotten worse. She has started hiding from her life, even putting up walls between herself and those she cares about most. During a panic attack one night, she impulsively calls a number that she’s had for many months. Chloe met Brendan at her boss’ wedding. With confidence and seduction, he easily steps into the role of helping her manage her fear. By the end of the long call, they’ve indulged in some serious flirtation and mind-blowing phone sex - and she’s feeling things she’s buried for too long.

The problem is that Brendan is the perfect male submissive - and Chloe isn’t wired for the D/s lifestyle. While their attraction is undeniable, Chloe doesn’t know if she can be everything Brendan needs. As a submissive, Brendan would never ask her to be something she’s not - even if it will break both of their hearts to turn away from how they feel about each other.

I want more by this author

What made the experience of listening to Branded Sanctuary the most enjoyable?

What other book might you compare Branded Sanctuary to and why?

Mirror of my soul

I just enjoyed listening to her tell the story.

I've listened to all this author has on audio and truly enjoyed them hope she puts everything in audio they are worth the additional price to listen too.