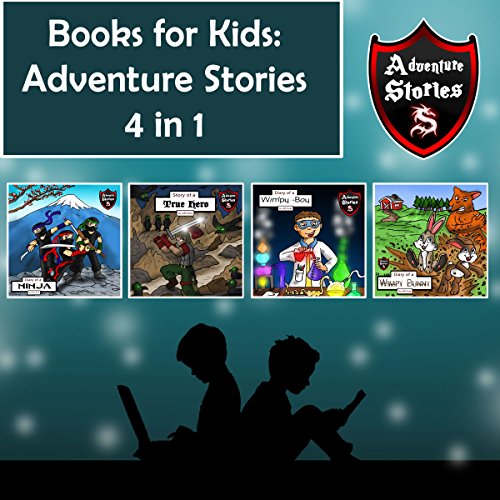 Books for Kids: Hero Diaries with Action and Adventure

Books for Kids: Hero Diaries with Action and Adventure

Diary 1: These ninjas are on a mission. They detest the inequality in the lands and decide to do something about it. Providing for the poor and stealing from the rich is their purpose, but they are yet to face a true evil among them, another ninja who stands in their way and seeks nothing else but to destroy these benevolent guys. Follow the diary of the three fighting ninjas who stay in the shadows and become more than just vigilantes. Or are there four ninjas? This story is full of surprises.

Diary 2: The life of Rufus the knight is slow but satisfying, until he finds out he could do better. Looking for answers to help him improve his talents, he seeks out the commander of the protecting knight army, who simply asks him if he is ready to face some of the most severe tests in the country. Focused on his goal to become a true hero, Rufus ventures for excellence as he come across mean creatures and vile monsters, before he can call himself a "Knight of Honor." He has to deal with dangerous crows, slithering snakes, and challenging puzzles. Will he be able to prove himself?

Diary 3: Meet Wesley, a boy with a high intelligence and a moral conscience. In his chemistry class, the teacher challenges all the gifted students to find a formula that can change the world. After heading to the school library, Wesley finds a dusty book with ancient spells and potions recipes, with which the possibilities are almost endless. He succeeds, but wonders about the consequences of these potions. Listen to this intriguing children's story in which a boy struggles with a moral decision, and acts according to his values and principles.

Diary 4: Bart the Bunny is a smart one. He is inventive, which shows after trying to use his sister's doll for a slingshot. His brother and he are innocently playing in the fields, until they discover a threatening creature that will bring the life of thousands of rabbits in danger. Will Billy and his brother find a way to trap the wicked hunter?

I liked this audio book for my kids who love story telling before bed. Good to have this.

Pretty poor and too much violence loose storyline

Personally I wouldnt reccomend this title as a good book for children. Decided to return it.

I bought this book for my kids

I bought this book for my kids and I found it very educational. This book will help me to encourage them to help other people who's in need. Thanks to the creative and imaginative mind of the author.

This book is so cool.

This book is so cool. My favorite part is the story of the four ninjas. It was very exciting to listen at because it was full of surprises. I can't still move on about this story. Kudos to the author. Two thumbs up!

This book is a great book for kids. The book was extremely motivational and love.

A lot of fun actualities.It is excessively best in class for my child yet I am certain she will have a ton of fun with it.when she grows somewhat greater

Gift for my son

Each time he reads a book, he falls asleep, but the things he learns in his sleep are more valuable than what he could have read in the books from his shelves.

Wow all in one. We are luck get this I have read most and love them. Loved by all the kids.

A friend recommended this book to us, and I'm so happy we got it. Great lesson! Easy for my kids (3.5 and 5) to understand.

There are so many great experiments in this book!! Pay attention to the age range of 7-12 years. Some experiments, even for a 7 year old, need parental assistance. We bought this for our nephew. His mom is a school teacher and picky about educational items, but she said this book is a HIT. She and he love it and have been doing experiments together. If you have a little scientist, this book has a lot of great things to try out

Bought as a gift for a 10 year old boy. His parents told us that him and his sister were excited about doing some of the projects and already had a few picked out... so I'm guessing it's a winner while being educational as well👍

Great little science book for the young learning mind. My grandson is in the first grade and I thought he might like to know about some things in this world and how they work

There are so many great experiments in this book!! Pay attention to the age range of 7-12 years. Some experiments, even for a 7 year old, need parental assistance. We bought this for our nephew. His mom is a school teacher and picky about educational items, but she said this book is a HIT. She and he love it and have been doing experiments together. If you have a little scientist, this book has a lot of great things to try out

My son loves Action and Adventures this special series. Received him to read a whole series for once with no prodding. Whatever works works.I received the book it was the weekend and he quickly went to listen to it.This tells me how much enjoy these books!

I am totally speechless

Speechless. I am totally speechless. This book was marvelous!!! Everyone must give you full stars interesting as this book is I feel that you could have written a few scenes better, with more depth. All in all its a GREAT book and I could not wait for Jeff Child's Hero Diaries with Action and Adventure. And I will be interested in seeing the good mobs act.

I especially like these books because they're based on action and adventure but they are still really clear and they have really good stories! this review is for the whole series.This was the best book yet it was so so good for all ages.Buy it now.

Hero Diaries with Action and Adventure

Make a mixed book of this series and make it great universal it would be helpful to just have a whole book.Overall I love your work and am actively expecting for the next book from you.I know that writing is hard and you probably do this.Whatever works works. My son enjoyed these books as well.