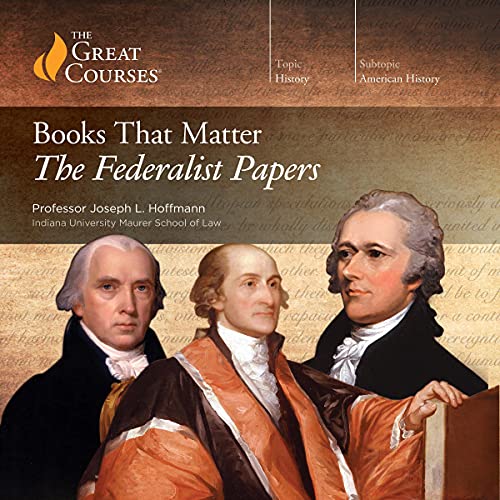 Books That Matter: The Federalist Papers

It would be difficult to overstate the influence of The Federalist Papers. Despite their lack of official or legal status, these 85 brilliant essays have served as the single most important guide to the interpretation and application of the US Constitution for more than 230 years. Authored by Alexander Hamilton, James Madison, and John Jay, The Federalist Papers offer a detailed blueprint for building a successful democratic republic.

Books That Matter: The Federalist Papers gives you the chance to delve into this magisterial blueprint for yourself. Taught by acclaimed professor and legal scholar Joseph L. Hoffmann of the Indiana University Maurer School of Law, these 12 thought-provoking lectures take you back to the hot summer weather of Philadelphia in 1787, when the delegates from the several states gathered to revise the Articles of Confederation.

As you will learn, the Framers were rightly concerned about whether the 13 largely autonomous states would accept a strong centralized federal government and whether such a system could include safeguards to protect against the tyranny they’d just fought a war to overcome. To answer these concerns, the authors laid out a bold vision for the new nation, drafting what became essentially the Bible of American government - perhaps America’s most significant contribution to the way that human beings choose to organize their lives, and their societies, in order to fulfill their hopes and pursue their dreams together.

What listeners say about Books That Matter: The Federalist Papers

Not about the Federalist Papers. liberal opinions

Very well done, but the title is a bit misleading.

This book was interesting, informative, and engaging. The narrator was outstanding. My criticism is that it was more a course on the Constitution than it was about the Federalist Papers. To be clear, commentary on the Federalist Papers was woven throughout the narrative, but I was expecting more of an analysis of those essays vs a course on American Federalism. That said, this was an excellent overview of American Federalism.

I’ve read my share of books on the Federalist Papers and the Constitution, but I’ve never had the pleasure of a book or lecture that ties them both together so well as this course. This is one of the best books or courses that I’ve read or listened to in a long time. I suspect many listeners including some of the reviewers are looking for a course which justifies either conservative or liberal viewpoints regarding the role of federal government. You’ll be disappointed if you’re looking for a bias in either direction from this. Hoffman gives a great balance. Superbly done. The details are fascinating.

Not bad, could be better.

Its fine, but if I had to listen to 8 hours of lecture on the Federalist Papers I would reccomend Hillsdale College free online courses.

There is only one reference to the bureaucracy and I disagree with some of the author's opinions about the intended fluidity of our government. All in all its an ok listen.

Simply great listening. Should be required teaching. Absolutely relevant still and an asset to understanding and forming opinions about todays political issues

This puts a lot of contemporary politics into perspective. it also demonstrates the enormous intelligence of the framers of the Constitution. You can also see how the current politicians are chipping away at the foundations.

Not as neutral as it should be.

Should have kept modern politics out of the lecture.not the same quality as your other lectures.

Get this course if you want to understand the Constitution

This excellent course gives you a behind-the -scenes look at the making of one of the most important documents in history: the United States Constitution. Dr. Hoffman’s presentation is excellent as well, succinct, but not simplistic, incisive, but remarkably nonbiased.

Just wish there was more!

Only one complaint for this series. It was too short! Such a rich topic and so much to explore.

Fascinating perspective on our country's founding.

An in depth perspective into the rationality behind the orginization of our country. Gives a deep dive into why we were organized as a republic and not a democracy, what the difference is, and why it was so important to our belief in individual freedom. Facinating lecture series by an engaging professor.