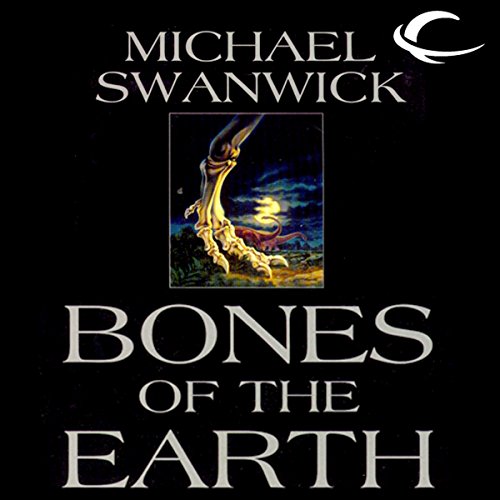 Bones of the Earth

By: Michael Swanwick
Narrated by: Kevin Pariseau
Try for £0.00

World-renowned paleontologist Richard Leyster's universe changed forever the day a stranger named Griffin walked into his office with a remarkable job offer... and an ice cooler containing the head of a freshly killed Stegosaurus.

For Leyster and a select group of scientific colleagues, an impossible fantasy has come true: the ability to study dinosaurs up close, in their own era and milieu. But tampering with time and paradox can have disastrous effects on the future and the past alike, breeding a violent new strain of fundamentalist terror - and, worse still, encouraging brilliant rebels like Dr. Gertrude Salley to toy with the working mechanisms of natural law, no matter what the consequences. And when they concern the largest, most savage creatures that ever walked the Earth, the consequences may be too horrifying to imagine.

"Expanded from his Hugo Award-winning story "Scherzo with Tyrannosaur," Michael Swanwick's Bones of the Earth is a time-travel novel as exciting as Jurassic Park and far more intelligent." (Amazon.com review)

What listeners say about Bones of the Earth

A new definition of Tedium

This has got to be the most boring and utterly pointless book I’ve had the misfortune to read.
Cardboard characters who have little or no idea what they’re doing, who’s motivations change from one page to another.
Add to this, a story that is fragmented to the point where I thought whole chapters had been omitted and you’ll get the picture.

The author’s approach to temporal paradox is one of utter contempt. Two copies of the same character occupy the same time in a briefing room - One young man with an older version of himself. This occurs repeatedly.
(This Author is supposed to be a science fiction writer?!)
The explanation of paradox near the beginning of the book is so unintentionally funny I had to stop play-back to recover.
His confusion between philosophical logical paradox and Temporal paradox, can only be an attempt to smoke-screen the shaky physics that this story is based on.
I’m not laughing now - The money I wasted on this mess could have been spent on something worth reading.
For some time I held on to the hope that it would give a worthwhile description of the epochs where the stations were located… However, the author had different ideas.

If you’re expecting Jurassic Park or Walking with Dinosaurs… Forget it.
These plastic parodies of people wonder through time from station to station without even looking out the windows.
The stations are not described in any detail, and on one occasion a group ventures outside, they wander around the landscape with the naive attitude of children taking the dog for a walk.

A far better example of time-travel can be found in Stephen Baxter’s “The time ships”
This doesn’t brush inconvenient physics under the rug but explores it in detail.

I think the main problem with ‘Bones of the earth’ is the lack of direction , the author couldn’t decide what type of book it should be and every aspect of it suffered has a result.


But it’s your money, you decide…

Revels in paleontology and paradoxes

Paleontologist Richard Leyster works for the Smithsonian. It???s his dream job, so naturally he scoffs when a strange man named Harry Griffin offers him a new job whose description and benefits are vague. But when Griffin leaves an Igloo cooler containing the head of a real dinosaur on Leyster???s desk, Leyster is definitely intrigued. A couple of years later, when Griffin finally contacts him again, Leyster is ready to sign on to Griffin???s crazy project. He and a team of scientists are sent back to the Mesozoic era to study, up close and personal, the animals that, previously, had only been known by their bones. When a Christian fundamentalist terror group disrupts the project, things get very dangerous for Leyster and his colleagues. There are also concerns about the whole time-travel technology. How does it work? Where did it come from? What is the government hiding?

Bones of the Earth gleefully revels in paleontology and paradoxes. Readers will go to science conferences, watch grad students do field work, and listen to lengthy discussions about the classification of dinosaurs, the evolution of fringe ecological niches, and the event that caused dinosaur extinction. Some of this gets a little dry. There???s an entire chapter called ???Peer Review??? in which several scientists work together to write up a paper that, due to being stuck in the Mesozoic era, they know will never be published. (Even though this went on too long, I loved this idea!) But it???s not all stuffy science, because this is Michael Swanwick, so there???s also a paleontologist orgy ??? probably the first one ever.

Most people, if they had the chance to move around in time, would be tempted to use this ability to profit financially ??? get the lottery numbers from the newspaper, find out who won a horse race and go back and bet on it... But not a paleontologist. Swanwick speculates that they???d prefer prestige over money (and I think he???s right about that). Thus, Dr. Gertrude Salley, who???s both a hero and a villain in this story, gleans facts instead of dollars during her time travels. Later, when Salley creates a time paradox and is forced to meet herself, she???s chagrined to learn that she???s not much fun to be around. Swanwick also takes us to the far distant future and speculates about the future of the human species. Humanity???s prospects are grim, but we???re left with a deep admiration for the human mind, its insatiable curiosity, and the science that allows us to fulfill our desire to understand our world.

I???ll mention, since I???ve seen some negative reviews of Bones of the Earth, that some readers have accused the book of being anti-Christian because the terrorists are creationists. I am both a Christian and a scientist and I did not feel that the book was anti-Christian. Yes, there is a villain who identifies as a Christian creationist, but two of the small group of paleontologists are also specifically identified as practicing Christians. A Christian who refuses to consider the possibility that creation and evolution are not mutually exclusive probably won???t like this book. For everyone else, it???s fine.

Bones of the Earth, originally published in 2002, is an expansion of Michael Swanwick???s 1999 short story ???Scherzo with Tyrannosaur??? which was published in Asimov???s Science Fiction and won the Hugo Award for Best Short Story in 2000. Bones of the Earth was nominated for a Nebula, Hugo, Campbell, and Locus Award. Kevin Pariseau narrates Audible Frontier???s version which has recently been released. He was a great choice for this book. During my life I???ve listened to hundreds of scientists talking about their research. There???s a certain reserved enthusiasm and eagerness they display and Mr. Pariseau has this down perfectly ??? he would fit right in at any scientific conference.

Not what you're expecting...but a good well written story

Overall it's a great work of Scifi. Plenty of intelligent dialogue and lots of real science. Believable multi-faceted characters are used to tell an intriguing and engrossing story woven through flashbacks and flash forwards across hundreds of millions of years..in both directions. Several of the components of this book could serve as stand-alone short stories.

I rated the story a 3 because I was expecting dinosaurs to have a bigger role, and be more central to the plot. The story actually centers around paleontology (as a science), time travel (as an unexplained technology), and paradox (mostly as relates to the people in the story, not the world at large). It's more of a Scifi people story with dinosaur wallpaper than a people vs dinosaur story.

Confusing, too many characters, story goes no where, don't waste your time or credits. I stopped listening not even a third in.

It was a bit slow the first chapter or 2 but then it grabbed my attention and held it the rest of the way through.

A very interesting story. A nice take on time travel. Really makes you think . I highly recommend this story.

Who would you have cast as narrator instead of Kevin Pariseau?

Anyone (except Scott Brick--this book would not benefit from an overly dramatic tone). Really, any reasonably accomplished narrator could do this book. Pariseau's reading is here, as elsewhere, stilted and unnatural. I find it hard to follow the action because the way Pariseau reads, it sounds like they recorded each word one at a time and then edited it together.

this was a good story and as i say a bit Jurassic crossed with Bradbury and even an allusion to the Bradbury story. If you're not up with all the dinosaur names you might want to google them to see what creatures they are. not all dinos are described, luckily I knew most of them but there are many mentioned that are uncommon. easy to lose track of where you are in the "external" story if you don't pay attention to the chapter heading blurbs. not quite what I thought it was going to be but still good. a little uneven in the writing sometimes I think, gritty and sexual moments that feel out of place in this story.

I cannot think of anyone to whom I would recommend this book. It is poorly written.

Still looking for a quality book. Amazing how hard they are to find.

Who would you have cast as narrator instead of Kevin Pariseau?

None that I could find.

This book made me angry because I kept listening, trying to find a story line. The first few minutes were promising, but then the story devolved into a mishmash of weak time travel intrigue.

Would you try another book from Michael Swanwick and/or Kevin Pariseau?

What was most disappointing about Michael Swanwick’s story?

he drug out every line

If you could play editor, what scene or scenes would you have cut from Bones of the Earth?

dont know could not finish the first part

if you have a boring book dont use a boring reader