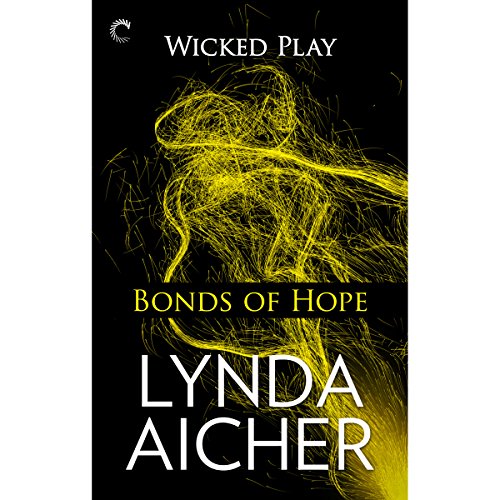 By: Lynda Aicher
Narrated by: Emily Cauldwell
Try for £0.00

Quinn's been taking direction all her life, so submitting to a Dom comes easily. But it's not just the most amazing sex she's ever had - Marcus challenges her to define her own needs and make her own decisions. And when her training is over, Quinn will have to choose between continuing to play a part in her own life, or living by her own rules.

New to The Den? Go back to the beginning withBonds of Trust, available now!

What listeners say about Bonds of Hope

If you could sum up Bonds of Hope in three words, what would they be?

Marcus, he so wanted to fight the atraction

Have you listened to any of Emily Cauldwell’s other performances? How does this one compare?

Yes but I had to go sleep at some point

I love all the books in this very Steamy series. "Bonds of Trust", "Bonds of Need", and "Bonds of Desire" I love the world and characters Lynda Aicher has created. "Bonds of Hope" is a very welcome addition focused on Trust. This is Quinn and Marcus's story..... Quinn - or as her fans know her, Missy - who has been in the lime-light since she was eight years old. Hoping to get away from her image as the cute girl she has accepted the role of a submissive in a new television series and, determined to get it right, she has come to The Den for a week of training with one of their Doms - Marcus...... Like all the books in this delicious series there is loads of very Raunchy "Tie me up and let me have it" Sex. So hot i had to go cool of in the cold wind out-side. This series just keeps getting better an better and i hope we continue with more Hot story's from the Den.....

This was a great addition to the Wicked Play serie

Okay, I enjoyed this series, totally far fetched but hot and fun! I like Quinn and I like Marcus, I like seeing the people from before again. Quinn is a bit of a challenge, but I like how Marcus deals with her, he is very sweet. Great ending!

In this story, a complete novice, Quinn, is interested in learning the dynamics of a submission / domination relationship to prepare a role for her next serie. What should be a game, a discovery driven by curiosity will become a window into a way of life with a real sentimental opportunity.

I love the adventures experienced by Lynda Aicher characters. Emotions are intense, sometimes harsh but always turned to release the characters of their preconceived ideas of the traditional model of relationship. This is a freedom of thought and desire which is often offered by the author through her characters.

Emily Cauldwell was OK but I found her voice to be a bit monotone and the male voices on the whole were not that good.

I wasn’t able to get into this book, as much as the previous ones, in this series. I’m not sure if it was the plot, or the characters themselves. This book just seem to miss the emotional connection that the others had.

This was definitely an insta-love story. The Hero proclaimed his love, in a weeks time. Yes, the trio, in the previous book, made their connection in a weeks time but, they did not call it love.

This wasn’t a terrible book, it was just, OK. I would say that it’s fine as a romance package pick but, I don’t think I’d spend a credit for it.
-V from Kansas

Would you consider the audio edition of Bonds of Hope to be better than the print version?

Each book just keeps me going!

Marcus was my favorite because he followed his hear!

Have you listened to any of Emily Cauldwell’s other performances before? How does this one compare?

Yes I have, this one was pretty much the same as book 3.

Sale buy only...if you're in the mood!

Would you try another book from Lynda Aicher and/or Emily Cauldwell?

What could Lynda Aicher have done to make this a more enjoyable book for you?

Not had sex scenes every other page OMG!! any chance of a storyline disappeared when this book started. Lynda should of called the book bonds of ewwwwww!!if she's not saying pussy every sentence she talking about tasting her own juice, Gross comes to mind.

Would you be willing to try another one of Emily Cauldwell’s performances?

If you could play editor, what scene or scenes would you have cut from Bonds of Hope?

Plot: Professional "dom" from good middle class family turns wealthy, famous actress into pain loving, exhibitionist "sub" in less than a week. Really? While I don't claim to understand the whole dom/sub thing, I don't see any woman adjusting to a totally different lifestyle that fast. And I didn't warm up to the professional dom; a man who gets PAID to pain to inflict physical pain and provide sexual gratification. While well written and humorous at times, the whole story left me cold.

LOVE The Series-This One Was Good Not Great

Would you consider the audio edition of Bonds of Hope to be better than the print version?

Quinn's been taking direction all her life, so submitting to a Dom comes easily. But it's not just the most amazing sex she's ever had - Marcus challenges her to define her own needs and make her own decisions. And when her training is over, Quinn will have to choose between continuing to play a part in her own life, or living by her own rules.

The romance and trashiness! There was too little of the later. Come on Lynda Aicher- don't hold back!

What does Emily Cauldwell bring to the story that you wouldn’t experience if you just read the book?

For the most part I was pleased with the performance; however the voice of Quinn sounded almost childlike at times...there is a difference between innocence and childish.

Good addition in the series...cannot wait for the next one!