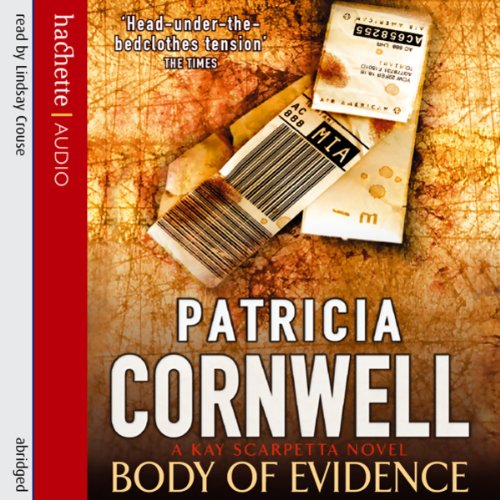 By: Patricia Cornwell
Narrated by: Lindsay Crouse
Try for £0.00

A reclusive writer is dead. And her final manuscript has disappeared.

Someone is stalking Beryl Madison. Someone who spies on her and makes threatening, obscene phone-calls. Terrified, Beryl flees to Key West, but eventually she must return to her Richmond home. The very night she arrives, Beryl inexplicably invites her killer in.

Thus begins for Dr Kay Scarpetta the investigation of a crime that is as convoluted as it is bizarre. Why would Beryl open the door to someone who brutally slashed and then nearly decapitated her? Did she know her killer? Adding to the intrigue is Beryl's enigmatic relationship with a prize-winning author and the disappearance of her own manuscript.

As Scarpetta retraces Beryl's footsteps, an investigation that begins in the laboratory with microscopes and lasers leads her deep into a nightmare that soon becomes her own.

"Head-under-bedclothes tension." (The Times)
"A great writer...read these books only in broad daylight." (Daily Mail)
"Cornwell is the one to beat when it comes to slick, speedy chillers." (Sunday Telegraph)

What listeners say about Body of Evidence

Another fantastic story from Patricia Cornwall, but the narration made it very difficult to listen to. No tonality and a voice that sounded like I was being shouted at the whole way through, it has to be the worst audible I’ve listened to. And throw in the random bits of music shoved in all over the place, it really was a shocker.

doesn't match up to book 1 for tension and story . Didn't build the Scarpetta character as much as I anticipated it might.

I found this abridged version very poor, I clicked on it inadvertently couldn't get it to load properly and was unable to playback the whole story. Very disappointed I can not recommend this book

I'm a big fan of this series of books. Always twists and turns and Dr.Scarpetta seems to get right in the middle. Really enjoyed it.

ideal narrator for a great character and plot