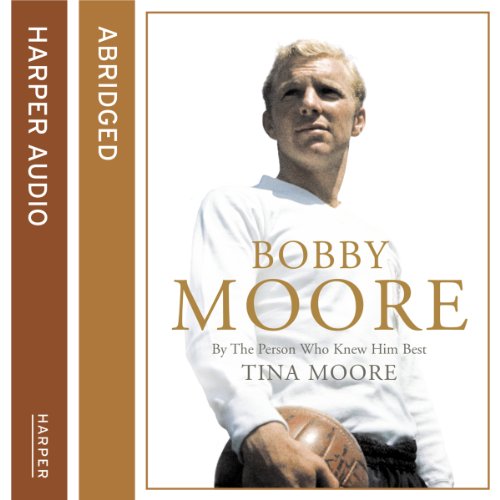 Bobby Moore: By the Person Who Knew Him Best

Bobby Moore: By the Person Who Knew Him Best

A tribute to the late Bobby Moore, captain of England's World Cup winning side of 1966, one of the greatest footballers of his generation, and a man who personified Britain in the swinging sixties. This is his powerful and moving human-interest life story, as told by his wife Tina, including his battle against cancer.

‘But Bobby had been in that dark place before Lance Armstrong was even born. In many ways it was even more devastating…in those days cancer was something you just didn't mention, a taboo word, a fearful prospect. All I could think was, he's only 23 and he's been handed his death warrant.' Bobby Moore's death in 1993, at the age of 51, had a profound impact on the people of this country. As the only English football captain ever to raise the World Cup, he was not just a football icon but a national one. Yet Bobby was an intensely reserved, almost mysterious personality.

Only one person was his true friend and confidante - his first wife, Tina, whom he met at 17 and married in 1962. With her, he went through all the triumphs and crises of his professional career - the life-threatening illness that struck him at 23, his clashes with West Ham (and later England) manager Ron Greenwood, his emergence as a footballer of international renown, the almost unheard of media intrusion and the kidnap threats on their children, that amazing 1966 World Cup Final day, the drama of Bogota when he was accused of theft, and his depression as he struggled to adapt to the end of his playing career.

Tina Moore's story of her life with Bobby, the break-up of their marriage and what happened afterwards, is inspirational, candid and told with revelations and authentic insight into what made Bobby tick. Alongside previously unseen material that sheds new light on his character and anecdotes about players, wives and managers told from a female perspective, it is a moving tribute to a national icon by the person who knew him better than anyone.

"He was my friend, as well as the greatest defender I ever played against" (Pele)
"Bobby Moore was a real gentleman" (Franz Beckenbauer)

What listeners say about Bobby Moore: By the Person Who Knew Him Best