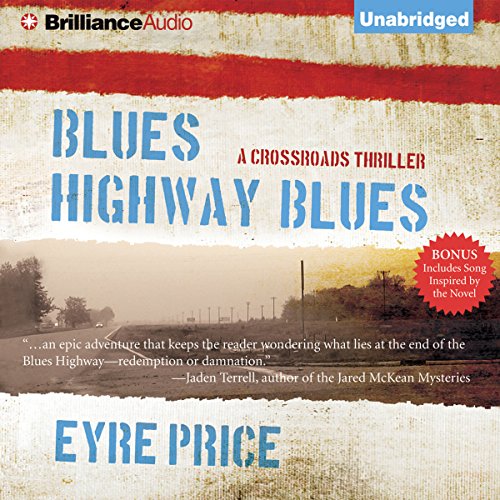 Daniel Erickson has the blues. There’s a Russian mobster wearing his finger on a necklace, two hit men hot on his trail, an FBI agent obsessed with his capture, and a rogue motorcycle gang hunting him down as he desperately races cross-country following musical clues he hopes will lead him to the stolen million dollars that might not be enough to save him. Or his son. His only hope for saving them both is to find the spirit of the blues: “Been pushed ’round all your life. Be a push back man.”

He wasn't really into the blues.

In a desperate cross-country journey to find stolen millions he is pursued by hitmen, a motorcycle gang and a mobster. To find the money he follows a series of musical clues. By the end of the adventure he knows a lot more about the blues.

I enjoyed the fast paced action and I liked the main character, Daniel, very much. I chose this book because I am a blues fan. By the end, I had become an Eyre Price fan.

Recommend reading. This book has it all. Want to read more books like this. Very well written. I hope my book will be good as this one. The story and the characters were fantastic to read. But it was the ending of the book that caught my attention. I love it.over all the book stand for itself.you only have one life to live, and you should be great full that you dont have to live that kind of life. Very well written. I love the book and will reread it over and over again as one of my very favorite books to read. Keep writing these kind of stories and i will buy them all.is their going to be another one with the same characters in it, want to read them again and find out what happen to them.

Full of violence, but still entertaining.

A broken man is led on a scavenger hunt in search of a million dollars through the history of the blues and rock and roll. The author does a great job in telling this story.

The villains are psychotic and thoroughly detestable and the "hero" is terribly flawed, which just adds to the atmosphere of the book.

The narrator does a great job as well. Just be warned that there is plenty of graphic violence.

very slow at first but stick with it<br />

the history of music is well worth listening to this mediocre story. it really is an excellent and authentic dialogue about how music Started With The Blues and ended up with Punk. that part is very interesting the rest of the book is filled with violence and a lesson in loyalty and life.