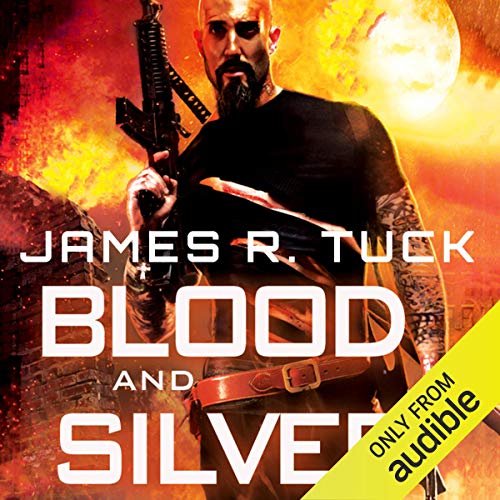 He hasn't met a monster yet that could give him a scare. With ice in his veins, silver hollow-points in his chambers, and an innate ability to rise from the dead, what's to fear? The answer may be something he doesn't want to face…

Deacon Chalk normally has no trouble telling innocent victims from real monsters. So protecting an abused pregnant were-dog is a no-brainer…until a vicious lycanthrope leader and his brotherhood target Deacon, other shape-shifters, and any humans in their way. Suddenly, Deacon is outnumbered, outgunned, and unsure who - or what - to trust. The only edge he has left is a weapon hungry for his soul and his most savage impulses. And using it will exact a price even this hell-raising hunter fears to pay...

What listeners say about Blood and Silver

Where does Blood and Silver rank among all the audiobooks you’ve listened to so far?

It is average. This isn't a blockbuster but a good solid read. This book is not a Corvette more like a Honda. It isn't fancy but gets the job done.

Deacon Chalk as he is the best developed character in the story.

Tough, Gritty, mispronunciations. Mr. Beaver does a good job but he mispronounces a number of words. He has a great tough guy voice but voices for other characters are somewhat limited.

The fight scenes are excellent.

A good read. The main character is like Owen Pitt from Monster Hunter International , just a whole lot meaner. The concepts have some holes but otherwise seem pretty well thought out. Overall, a fun read.

Where does Blood and Silver rank among all the audiobooks you’ve listened to so far?

What other book might you compare Blood and Silver to and why?

A three dimensional version of The Punisher. Like the Punisher Deacon is the best friend to have at your back and the worst enemy to have. Like the punisher he has a strict black and white view of the world, himself as a solider in an endless war and will go to any extreme to see the mission done. His origin is even the same only the supernatural been added. Unlike the Punisher Deacon has a full life outside of work so he's so much more developed playing for much higher stakes with the readers far more emotionally invested in his exploits.

What does Jim Beaver bring to the story that you wouldn’t experience if you just read the book?

I haven't read to book so I can't answer this beyond the obvious.

How unshakable his moral code is. I don't want to spoil anything but the opposing side was awstuck by his no limits approach and how easily he reclassified friend and foe. Much like again the Punisher when he shot *spoilers* in the face at the end of Garth Ennis first Max trade.

The character very complex despite his unshakable code. When he's a villain he delivered a fate worse than death to one of his adversaries and yet has no problem giving his life for strangers. Two books, two short stories in and I still don't have a handle on him.

If you are wondering I gave the audio four stars is because I'm giving way too many books five stars. Yes it's very good but five stars should mean something and there are minor narrative choices, wholly consistent with Deacon that irked me so four stars is fair.

I’ll bet Jim Beaver aka (Bobby Singer) was more than happy to help with this narration since Deadwood. When he could swear and call characters out for what they were, compared to those on Supernatural.

Need more books like this... keep them Coming...
If you haven't read this series it's a must...

Awesome installment in this series. Fast moving story, wonderful storytelling and performance, captivating characters and fantastic series. Can't wait to listen to the next one.