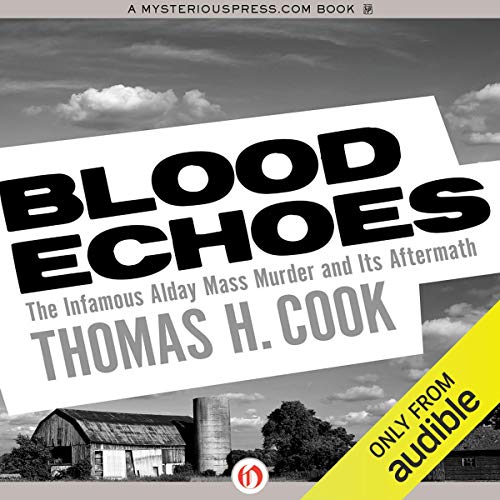 It was not a clever killing. On May 5, 1973, three men escaped from a Maryland prison and disappeared. Joined by a 15-year-old brother, they surfaced in Georgia, where they were spotted joyriding in a stolen car. Within a week, the four young men were arrested on suspicion of committing one of the most horrific murders in American history.

Jerry Alday and his family were eating Sunday dinner when death burst through the door of their cozy little trailer. Their six bodies are only the beginning of Thomas H. Cook’s retelling of this gruesome story; the horrors continued in the courtroom. Based on court documents, police records, and interviews with the surviving family members, this is a chilling look at the evil that can lurk just around the corner.

The story although disturbing as it's a true story, is well researched and well written. Truth is more disturbing than fiction. The writer gives a well balanced account of events looking back at the lives of the characters prior to the event happening. This gives the listener a chance to better understand how events transpired.

What was one of the most memorable moments of Blood Echoes?

The brutality of the events.

Worth a listen for the story unfortunate that the narrator is a bit flat in his delivery.

I would give this read a solid 3.5 stars. It was a detailed account of a horrific happening in Ga. It offered a lot of the court room information and at times I got a little bored, but stayed with it and do not regret the time spent making my way through the entire book.

If you grew up in Southwest GA, this is a must read. The book not only talks about the case, but also the aftermath, which most people have never heard of.

The narrator count have done a better job. He try’s to mimic the accents of various people and does a horrific job of it!

This is one I wish I had just read as opposed to listened to. I think the author is quite good but there are a number of times the narrator breaks into cringe-inducing faux Southern accents (I am Southern; I know the real deal). And Albany is not pronounced "all (pause)-BIN-ee." I could understand this if it were an obscure place name, however there's a rather famous capital city in New York that shares its name. Maybe I just prefer my audiobooks without the parts acted out. Overall I did think it was a well written account of the event. Not going to hold my irritations against Mr. Cook, and for most of the journey the reading is adequate. Recommended.