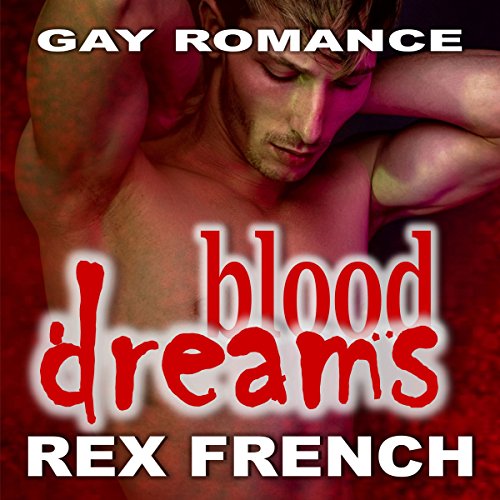 Like stars twinkling out of existence at dawn, Peter's memories fade. Only in his dreams can he see the dark, violent events that have imprisoned him for centuries. A chance encounter with a stranger leads him down a path to freedom as he risks everything to quench his thirst for love and break the chains which bind him to the creature who holds the keys to his past.

Blood Dreams is a steamy paranormal gay romance with vampires lusting for blood and hunting for love.

What listeners say about Blood Dreams

wish it was longer and did not end as it did... I want more !

A supernatural gay erotica is a new genre for me. Although it is something new, I enjoy listening to this audiobook..

Peter’s life is turned upside down while Hector is away. While Peter waits for Hector to return home he keeps himself busy with getting their house ready and keeping it stocked with the things that they need and in doing so Peter meets a man who will change everything. Can Peter find a way to free himself or will he be forever tied to Hector and his brutality?


I enjoyed Peter’s story. He longs for so much more, but he is so dependent on Hector he cannot find the strength to leave. When Ian comes into his life Peter does not know what to do. His emotions are all over the place as he continues to try and remember his past and deal with Hector. Hector is a dangerous and jealous being. Pain and death follow them where ever they go and Peter longs to be free from it. It was nice to see Peter fight for his love and freedom. Ian and Peter are good together, but can they survive, or will the evil eventually find them? The author does a good job of mixing the emotions and actions together giving the reader a wonderful story. Narrator Adam Riley does a good job of bringing this world and its characters to life and had me quickly immersed in their story.

Blood, sex, and forbidden love are the trifecta of most good paranormal romance stories, which is one of most popular themes within the M/M genre. Blood Dreams, originally published as a ten-part serial, has an abundance of all three elements in its almost four hours.

The story, told in first person, is about a halfling named Peter whose memories fade as time goes on and only come back to him in his dreams. He is the companion, lover, pet and often conscience of Hector, an ancient creature known as one of the Pedigree. Relocating every decade or so in order to keep from being exposed, the two have come to London to start fresh, drink copious amounts of wine, and discreetly feed on some locals.

While Hector is away on business, Peter goes shopping for wine and meets Ian, the amazingly sexy ginger hunk who owns the wine store. Ian falls instantly for Peter, or Peter’s glamour, or most likely a combination of both. As their insta-love/intsa-lust grows from a campfire to an inferno, the question becomes if Peter can keep it a secret from a possessive and often cruel Hector.

Though the blurb of the book makes reference to vampires, the story itself never truly explains what a halfling is, other than a human “turned” by a Pedigree. The overall description of the Pedigree seems to be a cross between a more attractive version of Nosferatu with elements of the modern werewolf and a smidgen of Highlander. Unlike most paranormal world builders who go into meticulous historical and cultural descriptions, random tidbits of lore to advance the plot is all there is. It in no way takes away from the story, which is strong enough on its own not to need the added exposition. Plus it leaves plenty of room for exploration in a sequel–or three.

***I was given this free review copy audiobook at my request and have voluntarily left this review.***