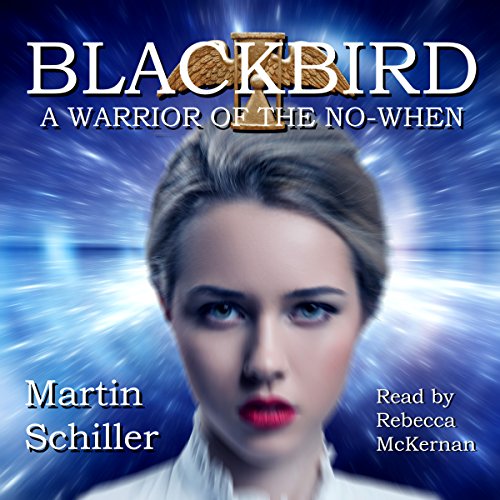 Blackbird: A Warrior of the No-When

In the Third Universe, the Union Jack flies proudly over the entire continent of North America. England is the greatest power in the world.

But another force rules over the crown. It is a mysterious group called the Masters. And their sinister servants, the Bookmen, enforce their laws against advanced technology.

The fires of dissent have not been extinguished, however; the Free Radicals study scientific advances in secret, and Penelope Victoria Steele has joined their rebellion. The beautiful and educated daughter of the provincial governor of Northwestin-Cascadia, she risks her very life to uncover forbidden knowledge, for to defy the Masters means death.

What she does not realize is that her world is not what it seems to be. Nor is time and space.

What listeners say about Blackbird: A Warrior of the No-When

What did you love best about Blackbird: A Warrior of the No-When?

The protagonist, Penny, is utterly charming. She has an engaging voice and is delightfully fun.

While the story itself is fun, the fact that it works best when considered as a framework for the philosophical elements makes it intriguing and well worth mulling over long after the story has ended.

Aside from a slightly dodgy Southern accent during the novel, the narrator does a wonderful job and does a great job of keeping the narrative engaging and fun.

I really enjoyed the story and the writer has an amazing literary brush to paint with. Some of the huge plot twists I saw coming ahead of time but it doesn't detract from the very well written and enjoyable story. If you give a little time it's a slow burn in the very beginning but once you get to the first little twist things become very fun. Love a lot of the creative connective tissue the writer put in with anomalistic historical pieces that ancient astronaut theorist will catch immediately. There are some interesting points of view regarding religion as well.

The reader's performance was great on the varied characters and different accents and for me, the southern drawl was the weakest, but all things considered, she was amazing. I would be lucky to have her narrate any of my books.

PROS: Solid storytelling. Smart. Well crafted.
CONS: A little slow in beginning and then picks up to a nice pace. Some of the relationship pieces were harder for me to latch onto, but different strokes for different folks! ;)

Will I continue into the second and third books? Yes. I look forward to seeing what is next for our heroine.

Can I recommend this book? Yes.

I had seen this book on here and the title grabbed me. So I delved in to it and so glad I did. The plot keeps pace even though it has many twists and the story flows wonderfully. A great and original work of Sci-Fi. Hopefully Mr. Schiller makes a sequel to this series!

Diarrhea: What Causes It and How to Stop It.

Diarrhea is the frequent passage of loose, watery, soft stools with or without abdominal bloating, pressure, and cramps commonly referred to as gas or flatulence.

Causes of diarrhea include viral and bacterial infections, as well as parasites, intestinal disorders or diseases, reactions to medications, and food intolerance or just really terrible books or audiobooks.

Should you be so unfortunate to have read or listened to this audiobook, my steps below should ease your pain and discomfort and get you back on track to a healthy lifestyle.

PUT THE BOOK DOWN. If you feel like; blowing not only your roommate but your arsehole out, this could be an issue. If you feel like drinking instant coffee, don't. Be a man, put the terribly written, half arsed audio record down and pick yourself up a real book. I suggest "A Hand in the Bush" by Deborah Addington and if you're on the receiving end of said book, you're still better off than you were while reading this garbage.