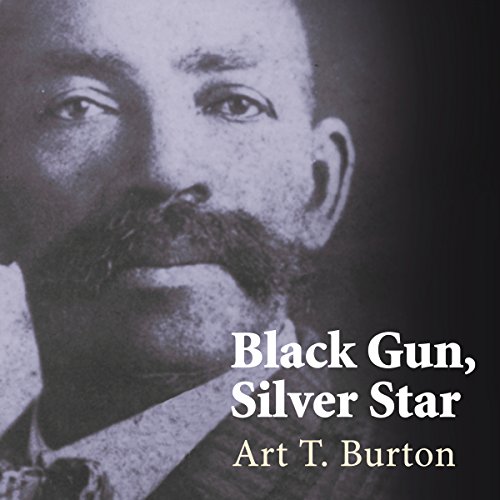 Deputy US Marshal Bass Reeves appears as one of "eight notable Oklahomans", the "most feared US marshal in the Indian country". That Reeves was also an African American who had spent his early life as a slave in Arkansas and Texas makes his accomplishments all the more remarkable. Bucking the odds ("I'm sorry, we didn't keep black people's history," a clerk at one of Oklahoma's local historical societies answered a query), Art T. Burton sifts through fact and legend to discover the truth about one of the most outstanding peace officers in late 19th-century America - and perhaps the greatest lawman of the Wild West era. Fluent in Creek and other Southern native languages, physically powerful, skilled with firearms, and a master of disguise, Reeves was exceptionally adept at apprehending fugitives and outlaws, and his exploits were legendary in Oklahoma and Arkansas.

A finalist for the 2007 Spur Award, sponsored by the Western Writers of America, Black Gun, Silver Star tells Bass Reeves' story for the first time and restores this remarkable figure to his rightful place in the history of the American West.

This book has been well researched with the information coming from many sources including the legal court documents of the time.
It gives insight into American history, race relations, pioneering Africans, the reality of being First Nation (Native America) and the female condition within society. We are able to see that a great amount of black history has been lost! Some to time but mostly due to the racist attitudes of whites who value(d) only their own timeline (as small as it is). Bass Reeves was an amazing man and it is clear to see why the Lone Ranger was inspired by this mighty champion of the law. If only I had seen a black actor playing The Lone Ranger I would have thought it the best TV show to date and watched every episode. My childhood eyes were always scanning the screens for someone who looked liked me and seeing Bass Reeves a black man (like my dad) plus a Seminole Indian (who looked like me) would have been the best experience TV could have given me at that time. This book has given me truth that no hater can ever taint! That no racist hate can ever remove, for much of this book has comes from legal court documents. The story unfolds in an easy to follow fashion and the author makes the meaning of every sentence clear so as to avoid us being lost our lacking historical knowledge of those days. I am greatful to the author for his hard work. This is a book that took time to put together. I am also greatful to finally know the name and story of BASS REEVES. I will be sharing my new knowledge on Black Lawmen of America, First Native history etc and of course who the real Lone Ranger really was!

The performance was great in that it immerses you in the story. Sometimes get lost with the
list of names, but the audible book was a great inspiring listen. It really gets the metal movie going. The book gets one thinking about all the American History that isn't taught.

This is American history untold in American schools. Not only was the story of US Marshall Bass Reeves dynamic and inspiring but the period and location of his story is very revealing. From the sad transition through slavery to Plessy and legal segregation via "separate but equal" and the lost of Indian land into the State of Oklahoma the listener is sitting in a classroom of a story untold.

I highly recommend this audio and it's great narration by Ron Butler even if you're not looking to understand the true American story.

Detailed review of one of Oklahoma's best lawman. Strong courageous and accurate shooting enabled apprehension of 3000 wanted men with many displays of grit and wit.

though sometimes it gets a bit like an encyclopedia. thousands of great western tales. Bass Reeves is a great American Hero.

ONE OF THE BEST

Very well performed very informative history of the the early west be it black or white. There was no skewing or fantasizing just definitively stating the facts of one man's life as a law enforcement official with a passion and tenacity to complete his duty. Overall this is one of the better written western history books, a must read.

This book was good. I learned things that were not taught to me in school, so it still has a lot of value.

the audiobook was excellent. The narration was easy to listen to and entertaining. rest in peace bass Reeves.

Too Heavy On Details

This book reads like a Bass Reeves case file. It's unfortunate that information on this legendary character is limited. There are many cases where Bass made a simple arrest, without incident, that are highlighted in excruciating detail.
Good information about his story and the highlights of his life are in here, but it is mostly scattered in the rambling, banal minutae of the list of every single case the author could find Bass tied to. A large part of this book reads more like an exhaustive reference than a good story.
This was probably the authors intention, at least in part, since information on Bass is scattered and so hard to come by.

An African Lawman in West Texas

Good narration , and staying true to the story line, US Marshal Bass Reeves he go after anybody who break the law even his own sons, an tale of Paris Texas, I like true story's like this.