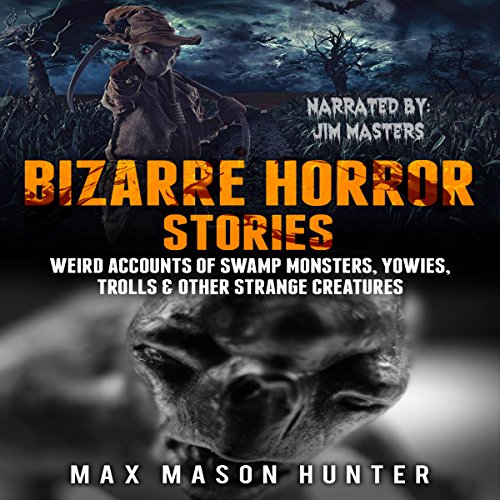 By: Max Mason Hunter
Narrated by: Jim Masters
Try for £0.00

There are horror stories, and then there are bizarre horror stories. The kind that really makes you scratch your head after reading them, and inspire you to utter the poignantly plaintive refrain, "What the hell was that all about?" These stories of trolls, leprechauns, and robot aliens serve to remind us that the realm of the unknown is not just scary, it is often downright bizarre.

Just consider the tale of the family beset upon by a strange gnome-like entity in Southern California. There is no apparent rhyme or reason as to why these strange creatures may enter into our lives, but when they do, the ball is in their court, and they deliver their bizarre narrative strictly on their own terms.

We didn't know that hidden realms of microbes, bacteria and viruses existed in direct concert with our daily life, until we invented the microscope. Perhaps something similar could be said about these bizarre intrusions as well. Perhaps there is some as of yet, hidden dimension from which the unimaginable occasionally emerges.

Just as man broke down the barrier that separated us from viewing the microscopic world, maybe someday we will invent a means of breaking through to this reality as well.

Until then, we will just have to enjoy the hair raising accounts of those who have been lucky (or unlucky) enough to bump into these other worldly denizens, resulting in some of the most bizarre horror stories you have ever heard.

Here is a preview of what's inside.

Stories just ok but the editing was terrible.

The bad editing of this book really put me off he repeated a lot of sentences that much I found it hard to keep listening.

I generally like Max Hunter’s paranormal books. I liked how this one put you more at the scene of the sighting and gave relevant information about each occurrence, but I would have liked more information. If you are going to talk about some well known events, I feel like you need to bring something more to the table other than what a quick internet search will tell you. That coupled with the terrible editing and narration I wouldn’t want to spend much on this listen.

Clearly Jim forget to edit the leprechaun story. That one is very tough to get through as he stops and restarts constantly struggling to get through the sentence and repeats words constantly. The Chupacabra story was rough too. Jim must have decided to switch the pronunciation of Chupacabra and spliced a clip of that over the other pronunciations as you can tell that the sentence isn’t read straight through, and he missed a couple. Not sure how the author accepted this as a final product. I was voluntarily provided this free review copy audiobook by the author, narrator, or publisher.

Some of these were interesting stories, but overall there wasn't enough information about any one situation/creature to keep my mind from wandering. I may have enjoyed these more if they focused on one or two creatures and gave more stories surrounding it.

the story's were ok. But the narrator seemed to read as quickly and as monotone as he could. but this wasn't the worst part. he would mispronounce just about everything and stumble over entire sentences that would cause him to say them over up to 5 or 6 times. at one point he even says "gosh! this paragraph".