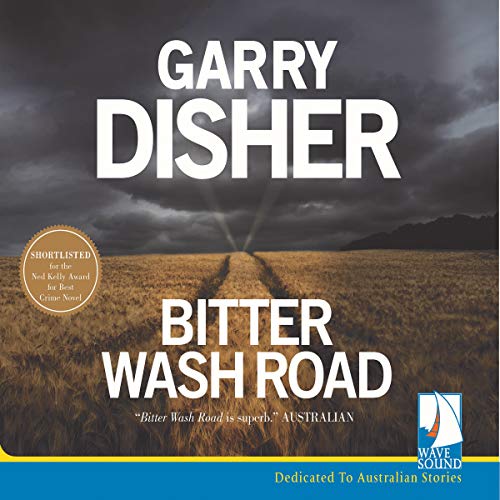 Hirsh was a promising metropolitan officer - until he blew the whistle on a case of police corruption. Now he’s been exiled to a one-cop station in South Australia’s wheatbelt. Called a dog by his own cop brothers.

So when he’s sent to investigate gunfire up isolated Bitter Wash Road, he suspects his backup might be the one to put a bullet in him. He’s wrong. But the events that unfold turn out to be a lot more sinister.

Swithered for ages about buying this one, and am really glad I did, it's the best book I've listened to in a while.
I often find that those books with few reviews are far superior to those with hundreds of glowing reviews which I've bought and thought were absolute rubbish.
The story is a great well written police thriller with an interesting, caring protagonist, and is interwoven with great descriptions of the arid rural Australian outback and people. Narration is good, too. I'm hoping that Audible will record Disher's new book, "Peace" which is the next Hirsch instalment.
Please, Audible?

I persisted with the story and enjoyed it but the experience was marred for me by the sloppy, ill-prepared narration. Shaun Grindell has a lovely timbre to his voice, but I doubt that he did much research & preparation before recording. Time and again the Australian place names were mis-pronounced - so much so that at times I had to stop and wind back to try and work out where he was actually talking about. Also, some commonplace words were pronounced in a most peculiar way - I hesitate to say wrongly because I accept there can be variations. Once again I had to re-listen to figure a couple of them out. But even worse was the appalling accent he gave to quite a few of the characters, especially Hirsch, the main character. He sounded like an overly young twerp with a New Zealand accent.