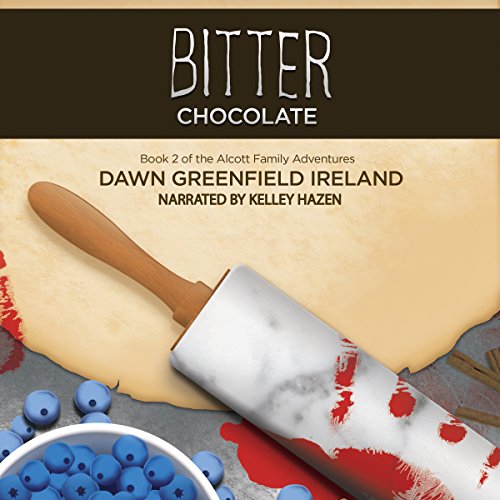 Lila Mae has a fit over the annual Chocolate Ball that she and her sisters host. Dorothea and Madge dump it on her. If it weren’t for Julian Gillespie, the Chocolate Ball would have melted.

Bernie, the Alcott patriarch, wants his Bentley back. Joseph’s cousin, Chewie, is hired as chauffeur.

Bambii's thrilled to be expecting while Dorothea, pregnant at 55, is at war with the world. No one is exempt, especially Henry, who she refers to as “Mr. Responsible”.

Cissy has dumped Georgio, the tattoo artist. Madge wants a pedigreed husband for her granddaughter, and Roger Bainsworth III has just the right credentials.

Amelia runs to the store. When she returns, her kitchen door is ajar. She toes the door open. Three things catch her attention: flowers, her rolling pin covered in blood, and a dead guy on the floor.

Is there a murderer in the house? Amelia backs out the door, sets the bags down, returns to snap a picture, then calls Detective Chance Walker, Lila Mae, and 9-1-1.

The dead guy’s identity shocks the whole Alcott clan. What was he doing at Amelia’s? Tilly is a prime suspect. She wants to know why everyone thinks she runs around killing people. Dorothea is happy that no one is pointing the finger at her.

Louie and Scooter’s truce ended badly. Chance has to bail Bernie and Chewie out of jail. Madge is freaked that Carmichael may quit. There may be a ghost at Amelia’s.

Uncle Tito and Pecos drive up from Mexico. Pecos met a Houston lady online. Uncle Tito psychically investigates the murder while Pecos’ lady friend has second thoughts. Pecos is upset. The “numbers” shows this as a great match.

Love dones are accused of murder, and the family wrings their hands. Secrets are no longer safe. The family has more shocks than the San Andreas fault line!

What made the experience of listening to Bitter Chocolate the most enjoyable?

All the old characters from HOT CHOCOLATE and great new ones. The sisters continue to be a riot. You learn more about Madge. I love these people!

There was more focus on 'family' in this one - family relations which I love because it's the good AND bad of families. And it's hilarious just like the last one. The mysteries are good too. Great detail in the crime scene. Two parallel mysteries.

When Madge and Teddy go to buy a gun.

I actually laughed out loud a bunch of times.

These books make you feel good. Good mysteries, great family interaction, crazy characters. I like the author's support of animals. AND Good food! Can't forget that! Great recipes included! You can feel there will be a third book and Im looking forward to that!

Better than the First!

Bitter Chocolate by Dawn Greenfield Ireland is a fun listen. I loved the family dynamics in this book, and how things flowed. This book has vivid imagery, humor, suspense and awesome narration. Kelley Hazen performs this book brilliantly with her distinguishable voices for the various characters. I highly recommend this series.

I was voluntarily provided this free review copy audiobook by the narrator and it was very entertaining. The Alcott family is expanding. Not only is one sister pregnant, and 92 year old dad's ex-nurse is pregnant, but new people are being hired and absorbed into the family. If that isn't enough to keep them busy, someone is murdered while they're planning the Chocolate Ball. Suspense and humour keeps you listening just waiting to see what is going to happen next. Between the author's skills and the narrator's abilities, you'll become a fan and want to listen to the entire series.

This is the second book in this series. It picks up where Hot Chocolate left off. The Alcott sisters and their family and friends deal with all sorts of drama including murder. The family is expanding and growing in more than one way. I love the Southern humor and laugh out loud moments!

The narration was well done. The characters were well portrayed. Kelley Hazen has a whole range of character voices that I've come to love. Even the annoying ones grew on me.

This series is so witty and funny. There is always so much going on I love the characters and their personalities. Some of it is kinda hard to believe but it fits in so perfectly with the storyline. It has murder mystery, romance blooming, fights with a 90 year old man and other such plots. I cant wait till the next in this series is completed. I hope this series continues through multiple books. I was given this free review copy audiobook at my request and have voluntarily left this review.