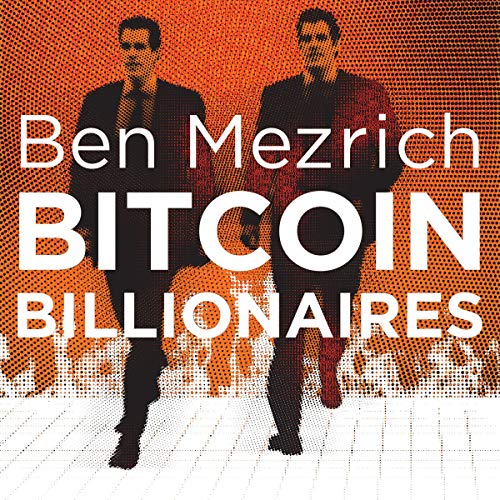 Ben Mezrich's 2009 best seller The Accidental Billionaires is the definitive account of Facebook's founding - and the basis for the Academy Award-winning film The Social Network. Two of the story's iconic characters are Harvard students Tyler and Cameron Winklevoss: identical twins, Olympic rowers, and legal foils to Mark Zuckerberg. Bitcoin Billionaires is the story of the brothers' redemption and revenge in the wake of their epic legal battle with Facebook - and the first great audiobook from the world of bitcoin.

Planning to start careers as venture capitalists, the brothers quickly discover that no one will take their money for fear of alienating Zuckerberg. While nursing their wounds in Ibiza, they accidentally run into a shady character who tells them about a brand-new idea: cryptocurrency.

Immersing themselves in what is then an obscure and sometimes sinister world, they begin to realise 'crypto' is, in their own words, 'either the next big thing or total bulls--t.' There's nothing left to do but make a bet.

From the Silk Road to the halls of the Securities and Exchange Commission to the Facebook boardroom, Bitcoin Billionaires will take us on a wild and surprising ride while illuminating a tantalising economic future. On November 26th, 2017, the Winklevoss brothers became the first bitcoin billionaires. Here's the story of how they got there - as only Ben Mezrich could tell it.

Worst Mezrich by some distance

The first 1/2 of this book felt like Mezrich had been threatened by the Winkleboys and so produced the most sycophantic account of them imaginable. Interspersed with this was an interesting account of bitcoin, nothing of any great depth but enough to offset the brown nosing. I was very close to returning this.

Why ruin your reputation by arse licking ?

Great story well written, I feel like listening to it again straight away.... 5 stars.

One of the best books I have ever listened to.
The book provided so much insight into the characters and their lives, turning what could have been a dull boring book on Bitcoin, into a captivating story of chance, grit and the will to believe.

ok i am biased i have read several of Ben Mezrichs book over the years and loved all of them and this one was in the same vain. He takes a story and really makes you feel like you are involved. Please read his other books if you like this one as they have the same style.

Another great book by Ben Mezrich. Brilliant story and everyone will love it who is involved in crypto currencies world.

A story of an authors love affair for the Winkevii

Interesting, engrossing and well written story of the Winklevoss twins x Bitcoin. The only downer is the bias for them being hard done by in previous business dealings..it gets a little tired.
The narration is ok, but I have no idea why they thought doing accents (badly) for figures across the world would be good idea?

the new Bits and Coins

insightful and inspiring read. narrator made it quite interesting and did a good job. lots to learn from the perseverance of the twins.you can't keep a good man down.

Excellent read, good story on the early days of bitcoin.
I'll be listening to it a second time

The problem with Bitcoin Billionaires is that it feels like the first half of a full story. There wasn’t any betrayal and overall it seems very sycophantic (even though they’re impressive) about the Winkelvoss twins.

An easy read for the crypto educated or the lay man. An honest, accessible story that reads well and puts the puzzle pieces together for those of us who’s primary access to bitcoin information came post 2016.

An enjoyable easy listen about the wild west days of crypto & how early adopters such as the Twins have helped bring maturity to the sector. A chance encounter in Ibiza leads to a billion $ valuation..

Great, insightful book. Respect to the Twins. Respect to Charlie. Crypto is a great space to be in