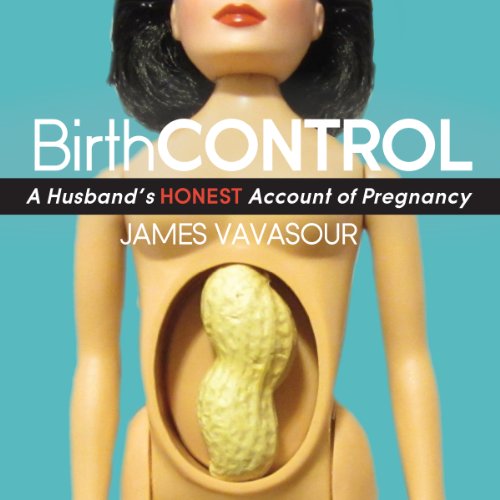 By: James Vavasour
Narrated by: Eric Fox
Try for £0.00

More than four million blissfully ignorant American men are thrust into fatherhood every year, yet these men are rarely armed with an honest account of what to expect in the first nine months. This nine-month, non-fiction account details how one man learns to let go of control in the quest for the perfect pregnancy.

All accounts were documented when they happened, long before the blurred baby goggles of fatherhood were firmly affixed. This rare, honest, and unmoderated male perspective on pregnancy will be educational for any new couple thinking of starting a family. For those already pregnant, it is a funny, relatable, and often neurotic vision of the day to day struggles encountered during this profoundly hormonal time in a couple's life. If you've ever had to settle on a baby's name or the color of a nursery, be publicly humiliated during birthing classes, or run the obstacle course otherwise known as a grocery store with someone days away from delivery, you'll understand.

The Expecting market is polluted with day-by-day pregnancy journals, medical texts, and non-fiction work overburdened with touching accounts of the mother's journey throughout pregnancy. Yet in a time where the husband's role in pregnancy has increased, there is still a distinct lack of literature defining the paternal struggles that he may expect while sleeping dangerously close to a nine month long science experiment.

What listeners say about BirthCONTROL: A Husband's Honest Account of Pregnancy

Maybe because I'm English I find the presentation cheasey with American sit com comedy throughout. Every other line a metaphor. However, it was informative and easy listening on the whole.

Really enjoyable and funny at places

I would highly recommend this to anybody. Really well written and realistic while remaining sweetly humorous.

It is well written and humour is used in places where otherwise any male listener might feel a bit dejected from the story. The whole style of the writing is a typical male perspective on life and everything else which i loved. The books is not pretentious and it was a fantastic listen.

This humor may work for some, but I found the Voice overs tone, speed and delivery awkward and jilting. Deleted it in first 30 minutes. Super nerdy attempt at humor and trying very hard to be "funny" with every line. Comedians autobiographies are often far less joke density focussed and therefore actually funny. No line or premise is without an obvious setup. Distracting and plodding for me.

Incredible narration! Wonderful story. Truly heartwarming. Any woman who is hoping to have a baby soon should screen this book to see if her husband would like it. In short, he will.

What disappointed you about BirthCONTROL: A Husband's Honest Account of Pregnancy?

Not sure if it's the tone and frequent emphasis added by the narrator, or just the book text itself, but found the husband incurious and unlikeable, did not identify with various escapades (setting up baby room, attending birthing class, others), was not amused by various stereotypical characters.

If you're looking for a warmup to learning about pregnancy told in a narrative (rather than textbook) style, there are some interesting tidbits.

The audio quality is good, the narration clear and easy to understand.