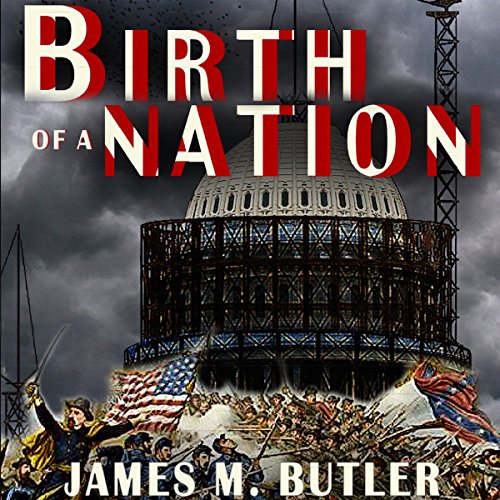 Birth of a Nation

Birth of a Nation

A group of friends create the opportunity to change history. They grab it with both hands, oblivious to what consequences altering time may bring. George Brinton McClellan is ecstatic over his latest promotion. Charged with bringing the rebels in Virginia to heel, he prepares to meet the rabble with a well-trained, disciplined army. What he doesn't know is that events of the distant future are about to alter his life in ways he never expected. Birth of a Nation is a story of change, warning of the dangers when one people try to impose their will on others. The year is 1861 and the American Civil War threatens to ravage a continent. Can the band of friends from an uncertain future succeed in their quest, or is history doomed to repeat itself?

Persevered and quite enjoyed it

What disappointed you about Birth of a Nation?

The narration was bad, but eventually it grew on me and I found the poor recording quality quite funny but not too irritating. The biggest irritation though was the time-travel contrivance which drew me in initially, but failed to score any plausibility merit when 1000's of incidental characters quite happily committed themselves to believing time-travel being possible and immediately accessible to them, and volunteered themselves faithfully to permanently "relocate" to the past to risk their lives fighting a war with no personal guarantee of outcome. The time-travel and unlikely social compliance in the circumstances were conveniences to set the stage I think for the author's primary fantasy interests rested in the battles and politics of the time retrospectively tweaked.

What could James M. Butler have done to make this a more enjoyable book for you?

I have no real interest in the period or the war etc. - alternative history and current technological and social/political influence on past time periods interest me more in a generic sense; but still, the characters gathered about them some depth as the reading matured and I could not abandon the story unheard. Further exploration of how contemporary ideas and technologies might affect the social development of the new nation and it's international relationships would have grabbed my interest further. Primarily though, increased plausibility of human responses to presented information and opportunity would have helped me suspend disbelief more easily. Much greater attention to social manipulation and more subtle means of securing the human resources even if only by 3rd-party reference or note of lapse of time indicative of logistical effort, with acknowledgement of enforcement means to avoid notice of authorities or aggressive interlopers. More effort into professional narration would have helped. The narrator wasn't dire - but could have researched pronunciation and used a professional recording studio, only keeping quality-controlled output.

What didn’t you like about Anthony R Schlotzhauer’s performance?

Lack of effort in controlling the recording environment, normalisation across the entirety of the recording, and accuracy in dictation. He didn't make different characters particularly distinct, but his over-all style wasn't too displeasing.

Interest and curiosity. Disappointment in that it could have been much more (for my tastes).

Glad I listened to it. I came out of the experience feeling enriched rather than robbed. But I am pretty patient, tolerant and forgiving - I would imagine a mainstream audience would simply perceive this product to lack quality in comparison to competitors at the same pricing-level.

Would you try another book written by James M. Butler or narrated by Anthony R Schlotzhauer?

dreadful really dreadful narration. listening to this guys hurts my ears. he pauses halfway through a sentence. you can hear his phone or email pinging in the background. utterly ruined the book

Would you ever listen to anything by James M. Butler again?

dont know. too focused on the dreadful narration

he narrates in monotone, pauses mid sentence, makes mistakes when reading. narrates like he is reading a bed time story to his kids

What would have made Birth of a Nation better?

The story was sort of interesting but the narration was horrible, the absolute very worst. The guy has poor distinction between character voices. I could have lived with that but not the incorrect pronunciations, stuttering, email chimes, cell phone noise, background noise and poor overall audio quality.

Would you ever listen to anything by James M. Butler again?

Maybe this story if another narrator was used.

What didn’t you like about Anthony R Schlotzhauer’s performance?

ABSOLUTELY NOTHING to like about this guy's narration. Hint: he should go to a quite room to record but first learn how to read and re-record parts where he messes up... that would mean re-recording this whole book!

The story was interesting but the narration made it simply too unpleasant to listen to at all.

I might buy the book to read myself. The premise was interesting, much like Guns of the South by Harry Turtledove. But no author should allow Schlotzhauer to voice their books. Even the free podcast of books are better than this guy, who I am assuming was paid for his "work."