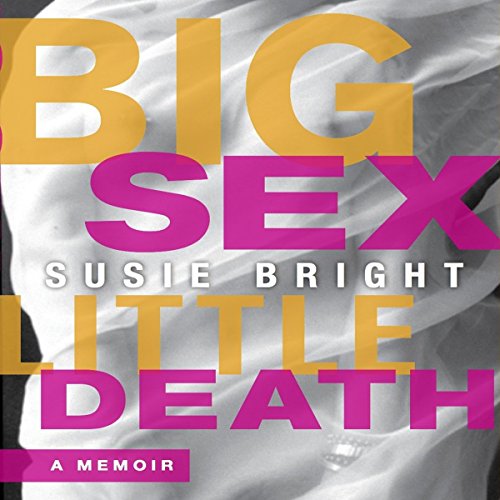 In this stunning and courageous coming-of-age story, Susie Bright opens her heart and her life. From fearful Irish-Catholic Girl Scout to gun-toting teenage revolutionary and finally "The Avatar of American Erotica" (New York Times), Bright's life story has been shaped as much by America's sexual awakening as the national sexual landscape has been altered by Bright herself.

I so enjoyed Susie Bright's memoir made extra special through her narration of it. Susie unfolds the nuances of many of her most significant relationships and the course of her unconventional coming of age, her education (the richest parts taking place outside of actual school), and the development of her life's work. Her story provides insight into significant but under-documented aspects of grassroots history - particularly her experiences as a young labor movement activist and as a feminist pornographer. Susie has provided her story with clarity, compassion, tremendous insight and inspiration. She has really chosen to live a life worth living and done work worth doing and she is able to share this with us through her masterful craft. Susie stayed focused in this volume and it feels to me that there is even more to her story that we may get to read about in a future volume. I would love to have more from where this came from!

Such a pleasure, this is definitely a worth remembering life, and is written in the most direct and open way. Every chapter explodes with events, conflicts and changes, every chapter is a record of complicities we call life, told from the most optimistic, down-to-earth, refreshing voice.
From a point of view of a non-American this book also gave me a glimpse of a very interesting era, the beginning of American feminism.
Easy, fun, educating , can't wait for the sequels...
Here in Audible there seems to be no need to present Susie as the talented narrator she is, and praise her fluent language and caressing voice.

Arguably, the best of all Susie's books

If you could sum up Big Sex Little Death: A Memoir in three words, what would they be?

Have you listened to any of Susie Bright’s other performances before? How does this one compare?

I subscribe to Susie's podcast and enjoy it very much. As this title is narrated by Susie herself, it's very well done.

Yes. I am not necessarily a fan of biographies but Susie tells the story of her life in a way that rolls not only her experiences but also much of the content of her other books into this story.

If you're going to be introduced to Susie, this is the most complete collection of both her life and philosophy.

It's an interesting story of a woman who became one of the most known sex educators in the world. While it did not fully captivate me, I was still left wanting to know more, not only about her, but also about other people in her life, and her relationships with them. After the long excursion into the origins of both sides of her family, the chapters often seemed like teasers, only skimming on the surface of the story with the promise of something deeper, that unfortunately was left out to allow another interesting part to unfold. I have a feeling that I would enjoy a slower paced, more in depth look into Susie's life even more.

One of the big pluses of the Audible edition is the interview that was added at the end, that spiced up the whole thing and added some more interesting details, making me wish that the author would elaborate on her life even more.

Susie Bright is one of the best narrators that I had the pleasure to listen to.

What an amazing life

Susie Bright's memoir of her life as an abused child coming of age in the 70's is riveting. Her memories of being raised by a mentally ill mother who physically and emotionally abused her was poignant and, at times, heartbreaking. Inspite of the pain, Susie has accomplished more in her life than most of us have ever dreamed of. Maybe the pain in her formative years is the reason she has spent her adult life fighting for the rights of those who live outside the acceptance of mainstream society. Her life and her story are inspirational.

What a life - Inspirational

If you could sum up Big Sex Little Death: A Memoir in three words, what would they be?

I've been subscribing for the past 2 years to Susie's Audible Show. So of course when the opportunity came to know a little more about the Lady that informs me about all things sex and makes me laugh every Friday, I grabbed it.
I have to say "What a Life!" Susie describes her Ups and Downs in a self-reflective way that is easily to relate to and feels very honest. You really get an interesting glimpse into the 70s feminist and teamster movement.
Susie is narrating this book like most of her work herself, which is great since she got a very pleasant performance voice and gives this a very personal touch.

What other book might you compare Big Sex Little Death: A Memoir to and why?

If you were gripped by the ups and downs in The Secret Life of Marilyn Monroe you will enjoy this book, too.
If you are listening to In Bed with Susie Bright or enjoyed any of her other works, this is a no-brainer.

Where does Big Sex Little Death: A Memoir rank among all the audiobooks you’ve listened to so far?

Interesting. I knew just about nothing about Susie Bright so I didn't really know what to expect. She definitely had a very interesting life. I think my favorite part was when they were discussing the movie Chasing Amy.

With a name like "Big Sex Little Death" I thought it would be full of explicit sex tales and "ooooohhh yea!" moments. However, that is not the case. Her life story is interesting enough in and of itself,

The book reads like many small conversations between the author and reader. The ending was a bit odd - not that I expected some drawn out reflections on life, but it was very abrupt. After researching I now also find it curious that Susie Bright really didn't reflect on the erotica collections she's edited or her podcast on audible.com.

Wished it was longer

I listened to this audio book in one long session while driving from Atlanta back to Nebraska. I'm a long time listener to her "In Bed With Susie Bright" series here on Audible so it was great hearing more of her background. Susie read sections of the book on her show so I was ready to hear the whole thing.

Susie's memoir very pleasantly occupied 12 hours of the trip but I wish it was longer. First because the drive was longer than 12 hours and I didn't have another audio book to listen to. Second because I felt there were gaps in the story and areas I wish were fleshed out more.

If you like "Big Sex Little Death" I recommend two other Susie Bright books, Sexual Reality and Mommy's Little Girl, I recently discovered here on Audible. They fill in some the gaps in the memoir and enhance the Susie Bright story.

As someone with limited knowledge about the author and her world, I found the book interesting but much too scattered and lacking in details. For instance, when she writes about the split in a socialist group she was active in, we get the following sentence: "We'd dodged gunfire and been put in handcuffs and stood up in court together ..." Well, those certainly sound like some interesting events, but that sentence is the only reference to them in the book.

Only in the later chapters about the magazine On Our Backs, and to some extent the author's general words about parenting, did I get a sense that the book was more than a random first draft of whichever memories occurred to her. She acknowledges that she greatly compressed time in the book and that some characters are composites, and that she hopes others will write about the events. So this makes for a fast but far from authoritative read.

Having lived in Duluth for quite a few years I did get a chuckle from a paragraph about Minnesota's Iron Range where her mother died and Bob Dylan grew up. She writes that if you think Dylan is an enigma, you just haven't met other Rangers--they're all like that.

A waste of my precious time and credit

no one... it was just a cheap bio going horribly wrong.

definetly not from this author... thats for sure!!

Who would you have cast as narrator instead of Susie Bright?

This book was not even worth turning it into an audio book.

I wish I had known before hand what type of book this is.... I got fooled by her big name...if i had known, I would not have wasted 10 hours of my precious time on it.