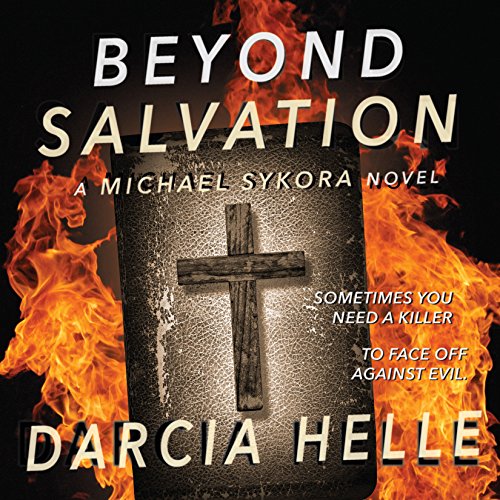 Beyond Salvation: A Michael Sykora Novel

By: Darcia Helle
Narrated by: Paul Fleschner
Try for £0.00

A teenage runaway disappears from the streets. The only people that care, or even notice, are her two best friends who are also runaways. For reasons of their own, they can't go to the police for help They seek out Michael Sykora, a software designer by day and hit man by night.

Known on the streets as The Ghost, Michael has a reputation for taking on the twisted criminals. Rapists. Child molesters. He has never been hired to find the lost. Until now. Michael teams up with ex-prostitute Nicki and full-time hit man Sean. Together they bend the rules of the justice system in order to find a young girl few people care about. In the process, they uncover a world where salvation comes with a price tag and God's words are used to incite fear in a congregation of believers.

What listeners say about Beyond Salvation: A Michael Sykora Novel

Beyond Salvation is Book 2 in the Michael Sykora suspense series. My review of Book 1 was posted earlier. Michael, his sort-of girlfriend Nicki, and his hit man friend Sean decide to take down a crazy mega-church preacher who kidnaps and abuses teen girls in order to "save' them. Meanwhile Michael's dad is dying of liver cancer. Michael seeks to find him mother and sister he has not seen since he was a small child. He wants to find them before his dad dies. The novel is set in the Tampa FL area.

The narrator is different from Book 1, but just as good.