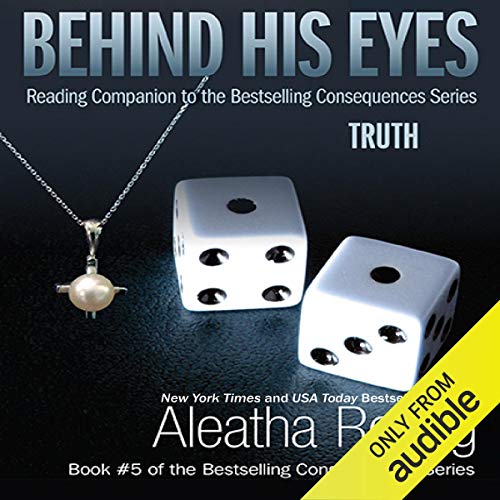 Behind His Eyes - Truth

By: Aleatha Romig
Narrated by: Sebastian York
Try for £0.00

Behind His Eyes - Truth is the second of the Consequences series companions, by New York Times and USA Today best-selling author Aleatha Romig. It is recommended to be listened to after completing Consequences and Truth. It may also be listened to after completing the entire Consequences Series: Consequences, Truth, Convicted, and Revealed: The Missing Years. This companion is not a standalone book and should not be seen as such. This companion explores the thoughts and motivations of Anthony Rawlings and his struggle to accept the truth behind the consequences. It is not intended as a total rewrite of Truth, but meant to enhance the listener’s understanding. Behind His Eyes - Truth contains significant scenes from the novel Truth, as experienced from Anthony’s point of view. It also contains never-before-published, behind-the-scenes information, a glossary of the characters, and a timeline that grows from Consequences to include the array of new characters and revelations found in the pages of Truth.

Behind His Eyes - Truth is the continued journey inside the mind of the man who survived the consequences. This companion allows listeners the opportunity to witness first hand as Anthony’s world changes forever. His rules and control begin to slip away, threatened by the most unlikely foes - an experience completely unfamiliar to him. Can something as pure as love and forgiveness wreak havoc on his well-planned existence?

Continue the long and painful acquisition, as the truth becomes evident, from behind his eyes!

What listeners say about Behind His Eyes - Truth

The Truth Behind His Eyes

Behind His Eyes - Truth 2.5 I found interesting because it's from Tony's POV. Besides it truly helps that Sebastian York uses his deep sensual voice to narrates Tony's perspective exploring his thoughts and motives.

In this story it travels with Tony and Claire through their history and inside their thought process....or sometimes lack of thought process as both their world change and evolve despite Tony's best laid plans.

This book is the story of Book 2 from Anthony's point of view (POV). I actually enjoy this POV more than the book it is based on. I'm not sure if it is the POV or if it is just the additional details that are revealed, but it is a solid addition worth listening to between the main books of the series.

Sebastian York is one of my favorite male narrators and his performance is deserving of 5 stars plus. York performs Anthony/Tony's POV in books 1.5, 2.5, 3.5 and 4. He does an amazing job.

Notations: some strong language, violence and (not graphic) allusions of sexual situations

If you found my review helpful, would you please select "helpful" directly below this review? Thank you so much.

Please consider 'following' me on Audible. I purchase a lot of books and I also have the opportunity to review books in all genres. If you'd like, read through, vote on and share this and any of my other reviews.

You need to read the series in order before getting this book. The series is extremely emotional and hard to get through yet worth every word read/heard. I was very happy for the opportunity to get to hear Tony"s POV. I didn't think I could ever like him but this made a difference. The fact that Sebastian York is the narrator made it perfect. He's the only narrator that could get away with the words out of Tony's mouth.

Everything Sebastian York reads is perfection.

Must read 1st book before reading this one.
Want to say this is just wrong, no one has the right to treat someone the way Tony treated Clare and be forgiven as she for gave him.
Soul mates are just that and there nothing that can be said or done to change it.
So, having said that I have to commend this author for not pulling any punches and saying it like it is.

Again this was from Tony's point of view, it has been awhile since I listened to 24 hours of book #2 so it refreshed my memory somewhat. I don't know what is going to happen but I am ready to get this over with. I do love this mystery and the characters but it has been so prolonged that I am losing my interest. And I see she has added a book 5....ugh!

I will never ever forget this series

Behind His Eyes - Truth as a companion it works fine with me,
making me try to understand all of Tony's madness.

Going for the next one:
Revealed - The Missing Years book four of Consequences for sure!