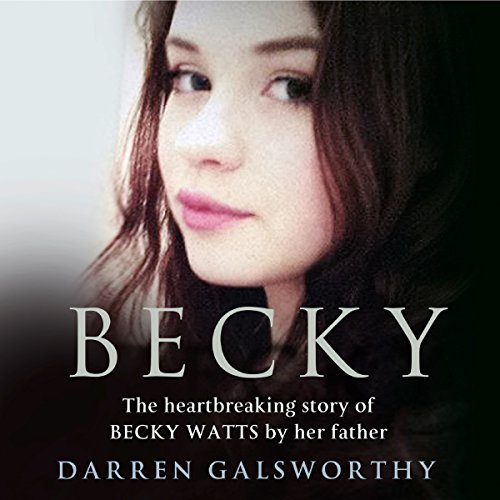 Becky: The Heartbreaking Story of Becky Watts by Her Father Darren Galsworthy

By: Darren Galsworthy
Narrated by: Ben Fox
Try for £0.00

This is the heartbreaking story of the murder of 16-year-old Bristol schoolgirl Becky Watts, a personal and heartfelt account of a crime that shocked the nation in a unique way and tore a family in two.

A vulnerable and shy girl, Becky Watts was brutally murdered and dismembered by her own stepbrother on 19 February 2015. As her father, Darren, discovered the horrific details of what happened to his darling girl, his world fell apart.

Writing about his darkest hours and unbearable pain, Darren uncovers what Becky's relationship with her stepbrother, Nathan, a child he had raised as his own son, was really like. He recalls the devastation of discovering the truth about the depravity with which Becky was torn from him in the safety of her own home. And he recounts the torment of the legal battle to see his stepson sentenced to life behind bars.

But at its heart, Becky is a poignant personal story, a chance for Darren to pay tribute to his darling daughter, to celebrate her life and take back control of how she is remembered.

Darren recalls with enduring love the daughter he fought so hard to get custody of after she was taken into foster care as an infant, the happy child who completed his life, and the innocent schoolgirl who brought joy and happiness to all her knew her. Both heartfelt and haunting, searingly honest and unflinching, this is the ultimate story of a family tragedy.

What listeners say about Becky: The Heartbreaking Story of Becky Watts by Her Father Darren Galsworthy

How sad and brave those parents had been.
The love they have for each other.
Each day I listened with a lump in my throat and tears in my eyes to think someone could do such a horrific crime and think they could get away with it.

Would you consider the audio edition of Becky: The Heartbreaking Story of Becky Watts by Her Father Darren Galsworthy to be better than the print version?

I haven't read the print version.

What was one of the most memorable moments of Becky: The Heartbreaking Story of Becky Watts by Her Father Darren Galsworthy?

The author and father of Becky really comes across as a sweet, good-hearted man who did the best for his kids. He's just your average hardworking man from Bristol who was a good father, stepfather and husband. I really liked him and my heart broke for him and his wife. He reminded me of my uncle who likes a drink and a fag and uses coarse language but has a heart of gold.

Which character – as performed by Ben Fox – was your favourite?

Darren the father of Becky.

I think that a woman should have narrated Anjie's chapter. The narrator was very good but has a strong accent and of course is male so I forgot that it was her words.

really amazingly graphic of a family spot in two but managing to stay together. beautiful.

Great audio sad times but excellent knowledge gained from it i recommend it for every reader.

I cried so many times listening to this book. I feel like I know Becky and the family now. I am so sorry for your loss, I hope you find some peace xxxxx

such a sad event for the whole family. a tribute to a lovely girl r.i.p. becky thoughts are with your dad, mum, step mum and brother

I found this so hard to listen to. It is hard to rate it for its ‘story’ as this is a ‘story’ which should have never had to be told. I had to turn it off and take a break at times,it is harrowing and interesting all at the same time. I am sure that telling his story helped DarreN Galsworthy to heal. I hope it did. So sad.

Heartbreaking and well read. Couldn't stop listening . Left me wondering if they ever got any real answers from Nathan