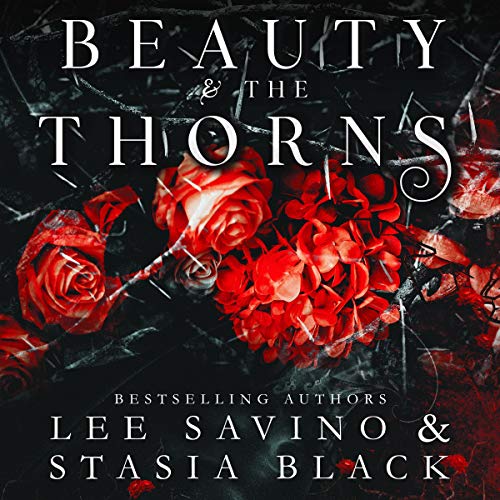 Beauty and the Thorns

I never thought I'd see him again.

My first love, back from the grave.

My captor and tormentor.

He holds my past, present, and future in his scarred hands.

No matter how far I run, my path leads me back to that lonely castle.

Back into the arms of the Beast.

What listeners say about Beauty and the Thorns

This is the second book to the modern day Fairytale of beauty and the beast. It’s been written so very well and has kept the magical feelings throughout this book. With a great performance from both Kelsey and Brian there’s hours of entertainment for you.

this story continues to darken as daphne tries to show logan her love and commitment to him through her submission. but logan"s bitterness to the men in daphne"s life throws doubt on their relationship. daphne doesn't know who to trust and the plot only darkens. Great book.

I found this book intriguing, there were a few too many sex scenes for my individual taste but the story was brilliant and the narration truly captivating. I did thoroughly enjoy it.

First book was great. Downloaded the second waiting for the end....wow....giving you a heads up on the ending...so if you do not want to hear it go to next review.
If you want a tearjerking experience, where you finally expected the two characters to finally get happiness...forget it. All you will is dying.
I cried for days and was seriously depressed. Don’t know if I will ever get over that ending. It was the second romance to end with tears. I want HEA when I listen to a romance.
I have been happily married for 34 years and all this type of ending does is make me think of losing the love of my life. And here I go again with tears!
Be warned!

chapter 19 was messed up. so skip to 20. good book over all. but wish chapter 19 wasnt messed up. if you just skip it the book does make sense. but chaper 19 is from book one. and idk why it did that.

Need the next book

When is the next one being recorded? I really enjoyed this title was sad they next book as yet to be recorded

Could Logan and Daphne's story be any more intense? This installment was a very rough emotional rollercoaster. Now, headed to the conclusion.

to much humilliation ... not good repetitive sex truth is that is really bad. theres too much butt plug iakkkkk

Note: Pretty sure chapter 19 is missing. It’s the bowling chapter from book 1. So if you have KU, you might want to read the book.

I’ve read and listened to a lot of dark romances, but I’ve learned some new stuff in this book. Lots of toys, clamps, piercings, and butt stuff. I’m not complaining. It was definitely a heated listen. Might want to listen to this in private or with earbuds.

Some people might think a good portion of this book is erotica...and it is. But I think it reflects the nature of BDSM in part. Logan thinks the only way to connect to Daphne in his new twisted physical and mental state is to take her in depraved ways. That somewhere in the darkness, she could join his world. For Daphne, this new sexual exploration frees her from her guilt—frees her from the pressures of being the parent to her father and to herself. And overall, these sexy scenes help Logan and Daphne reestablish trust and be more genuine in their relationship.

There were a lot more flashbacks in this book too. Although it didn’t really tell me anything new, it was sweet (but slow sometimes). Definitely reaffirms that Daphne’s dad is a jerk.

The drama doesn’t really pick up pace until towards the end. Adam was quietly cooking up trouble in silence until the pot explodes. And yeah...it will piss you off.

And a new tragic conflict is thrown into Daphne and Logan’s relationship. So just prepare your heart once you reach chapter 24.

Logan And Daphne's Story Begins Dark And Steamy, But The Story Becomes Plot-Driven When Daphne Needs To Return To New Olympus.

This is book two of the Beauty and the Rose series, which is a steamy modern spin on Beauty and the Beast. While it follows book one, Beauty's Beast, and is best read in sequence, it is possible to read it without having first read book one. The only significant points not clarified in this book are the missing seven years of Logan's life and how he earned his wealth during that time (which doesn't play an important factor in this story), and the full picture of the power struggle within Belladonna.

For fans, characters in other books by the authors make brief cameos in the story. Marcus and Cora from the Innocence trilogy make an appearance.

The story takes place in New Olympus. It revolves around Belladonna, a research company that was once headed by Dr. Piers Laurel. The company's mission was to find a cure for Battleman's disease, the illness that Dr. Laurel's wife fought. When she died seven years ago, the doctor was overcome by his failure to save his wife and was lost to his depression. The board fell under the influence of conniving Adam Archer, heir to Archer Industries, a billion dollar empire. Adam, along with Logan Wulfe, had conducted research at Belladonna under Dr. Laurel. Adam wanted to shift the company's focus from diseases to cosmetics.

Logan Wulfe, at twenty-seven, had always been rough around the edges. His parents were into drugs more than parenting and he was orphaned at age twelve. He grew up never having felt the love of a family. He did eventually find a mentor, and Dr. Laurel became a surrogate father figure once he began research at Belladonna. He worked diligently towards finding the cure Dr. Laurel sought.

Daphne Laurel, at nineteen, didn't have much of a childhood. Her mother was often sick and her father's sole focus was on finding a cure for his wife. To please her father and help her mother, Daphne devoted herself to her studies. At eighteen, she was nearly finished with her PhD. She spent long hours studying at the lab. It was then that she quietly tried to get noticed by Logan, her first crush.

Logan became aware that Daphne was no longer a child, and as tempted as he was by her, he knew she was yet too young for him. But they spent long hours together in the lab, so they developed a close friendship over the course of a year. But Logan's life took a devastating turn when he discovered Adam's scheme to take over the company shortly after Daphne's mother passed. Logan ended up hospitalized and disfigured, eventually disappearing from the hospital and New Olympus.

As the story opens seven years later, Dr. Laurel's daughter Daphne is CEO and her father is in the hospital. Belladonna is struggling. Daphne has just left Logan's castle to check on her father after promising Logan to return to him afterward. She had been held by him for two weeks as part of a mad plot for revenge, but by the time she left they had developed real feelings for one another. Daphne is intercepted by Adam while en route to her father and proposed to amidst a crowd of reporters. Though she never actually accepts, she is incapable of forcefully speaking for herself. She knows immediately how deeply the news will hurt Logan and accepts that he will take it out on her when she returns. Logan owns Belladonna's patents, so she must face him to try to get them back and save Belladonna.

Logan is devastated by Daphne's betrayal. That she accepted Adam's proposal, his enemy, makes it worse. He isn't sure how many times he can break and still go on. So when Daphne shows up at the castle asking for him to return the Belladonna patents, he plans to make her burn for them. He is the Master, the Beast, and she is his slave. Daphne plans to take the punishment. She hopes the anger will burn out and they can return to being Logan and Daphne.

Logan and Daphne's story begins dark and steamy as Logan dishes out Daphne's punishment. They are lost in erotica as they work through their trust issues. But just as they begin to reconcile, Daphne needs to return to New Olympus and the real world. The story becomes plot-driven at this point. The couple's fragile truce is once again tested. They nearly achieve a happy ending, but the story ends with a sad twist that leads to book three in the series, Beauty and the Rose.

Logan and Daphne's story is a mix of erotica and complex storylines. It is nicely written. The plot is complex (in the latter half). The characters are well-defined. The story is written in first person. The POV alternates between Logan and Daphne. I rate this book four stars.

As for the Audio: it is well-performed.

I received a free advance copy of this book and audiobook and am voluntarily leaving a review.

I loved the second book. So much so I can't wait to hear the third one. I've been on the edge of my seat the entire time. I was given a complimentary copy, and this is my honest review.

It just gets better.
Ends in a cliffhanger.
Daphne isn't being a pushover anymore, not even for Logan. Everything in her life has changed, can she pick up the pieces?
Logan may have gone to far and pushed Daphne away forever.
Well written and well read. Can't wait for the last book.

This second installment is a heart pounding emotional rollercoaster that you never want to end! The trials Logan and Daphne endure will leave you breathless and begging for more. Love, love, love this story and cannot wait for the next part of this adventure.