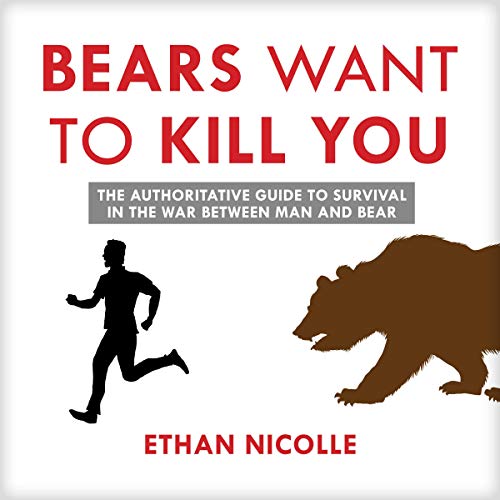 Bears Want to Kill You

The Authoritative Guide to Survival in the War Between Man and Bear
By: Ethan Nicolle
Narrated by: Ethan Nicolle
Length: 4 hrs and 8 mins
Categories: Comedy, Other
5 out of 5 stars 5.0 (1 rating)

Bears Want to Kill You

Did you know bears never die? There are many unknown facts about these fur-adorned mammals. Because the hard truths about bears can be difficult to process, society often shields itself from the realities of the true threat bears pose to mankind. Much as it took centuries for mankind to realize Earth was not at the center of the universe, it will take a long time for humans to realize that they are not at the top of the food chain.

In Bears Want to Kill You, author Ethan Nicolle exposes the lies about:

...and gives you the truth about:

Every book written on bears has been a lie. People live under the false impression that bears can be avoided, that bear attacks are survivable, and even that bears are not immortal. Suffice it to say, people have a lot to learn about bears, bear safety, bear attacks, and the impending war between man and bear.

This is the first honest book about bears ever written. No lies, no propaganda. It’s the hard reality nobody wants to face. Can you bear the truth?

Ethan Nicolle is the co-creator of comic and TV series Axe Cop, webcomic Bearmageddon, writer for the Babylon Bee and writer for animated TV shows such as Teen Titans Go! and VeggieTales in the House. He resides in a giant bear locker in Rancho Cucamonga, CA.

"Bears Want to Kill You wields a prescience that is both hilarious and terrifying, as Ethan Nicolle masterfully spells out the ursine demise that is coming to us all." (Nick Offerman, Parks & Recreation, Axe Cop)

Crazy, deranged, hilarious!
Ok, maybe you need a particular thought of "I've had enough serious things for now", combined with a very weird sense of humour, but I love this!

It's just too mad to miss!

Sssh, or the bears will hear you

If you can’t read “Bears Want to Kill You” because you’re hiding in the dark so the bears won’t see you... Now you can listen while you cower. Just don’t let them hear you.

Too bad they can see you no matter where you hide....

(It’s a reading by the author, of a visually-oriented picture-heavy original. The readings of the captions and descriptions is hilarious, though.)

Warning; you must wait at least thirty minutes after eating to read this book.

Warning: do not listen while operating dangerous equipment.

This book is your guide to life. It will give you a road map for all of the ways that life (bears) will try to stop your pursuit of happiness.

I really can't recommend the book itself highly enough - a hilarious "survival manual" in the illustrious tradition of The Zombie Survival Guide. I loved the print version of this book, and was curious hear how well the (many) illustrations, diagrams, and charts would translate to audio, and the answer is... well, it's hard to say. What the narrator (who is also the author) decided to go with was simply describing the illustrations in the absolutely driest, most technical deadpan imaginable. It kind of gives a picture its own special kind of life to hear a guy describing, with bloodless exactitude down to the hundredths of a percent, the precise proportion of honey, salmon, elk, ninja, and last surviving dinosaur present in a typical bear's droppings, but really - the images really do need to be *seen* to be properly appreciated. The effort here is heroic, but the audiobook feels more complementary to the printed version rather than being truly stand-alone.

great book! super funny, I listened to it on my commute to work. finishing move: poke driver.

Ethan Nicolle does an excellent job narrating all the various dangers bears can pose to us-- their different attacks, their different secret attacks, how to make idiots of ourselves before dying, different bear "species", etc. It's hard to stop laughing once you start, so make sure not to have this on low if someone is sleeping! Oh, and buy the book too, its diagrams are a must when listening to this-- you'll even get a free coupon code for a discounted price off said book if you skip to the end before you listen to the whole thing!

Very funny. It will undoubtedly become a modern classic, if anyone survives to read it.