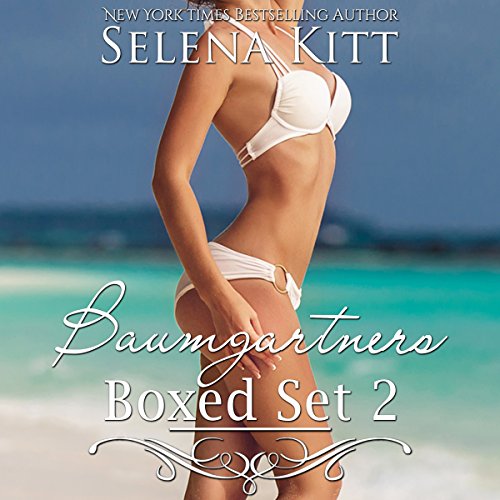 By: Selena Kitt
Narrated by: Holly Hackett
Try for £0.00

What do you get in the Baumgartners Box Set 2?

When Danielle Stuart meets the Baumgartners, her life doesn't need to get any more complicated. Studying Italian on scholarship at the University of Michigan, Dani is haunted by a horrible tragedy that her husband, Mason, simply can't come to terms with. But when she meets Carrie Baumgartner, and then her handsome husband, Doc, she finds her attraction to the couple irresistible, no matter how complicated things might get. While the two women bond over being childless and yet surrounded by children in the university's married housing complex, it's Doc Baumgartner who really brings them together with a game-changing idea that serves to reshape all of their lives.

Danielle Stuart is spending a year abroad studying in Venice, the most romantic place on earth. But while Danielle loves the language, she's not interested in love itself. Not until she meets a handsome, Italian gondolier named Nico. He's got his eye on her, and Danielle simply can't resist his flirtatious charms. But when her ex-husband, Mason, shows up on her doorstep looking to reconcile, she finds herself with a dizzying dilemma. Finding herself torn between the two men, desperate Dani writes to her former lovers in hopes they might help her clarify her muddled emotions. Will the Baumgartners and their polyamorous insight give her the courage she needs to choose?

Janie Baumgartner has big dreams of trying to make it as a writer in New York, and between that and her job as a nanny, working for family friends Ronnie and TJ, her life is incredibly full. That's when she meets him. In spite of the compromising situation, Josh, who just happens to be an agent, sees great potential in her - and not just as an author. Josh finds Janie utterly irresistible and he's the kind of man who aggressively pursues what he wants. But - plot twist - Janie is already in a complicated, polyamorous relationship with her benefactors. What happens when she finally reveals this to Josh? Will she lose him? Will she be forced to make an impossible choice? Or will she find that the capacity for the human heart to love is, indeed, endless?

Missed the mark, needed to kill off Mason

This set wasn’t as good as the first boxed set, but it wasn’t bad. I think the thing that soured me the most for the entire thing is Mason and her giving him more chances. He physically beat her!! Why on earth would we be going back to him? Find another man or stick with the saucy second one.