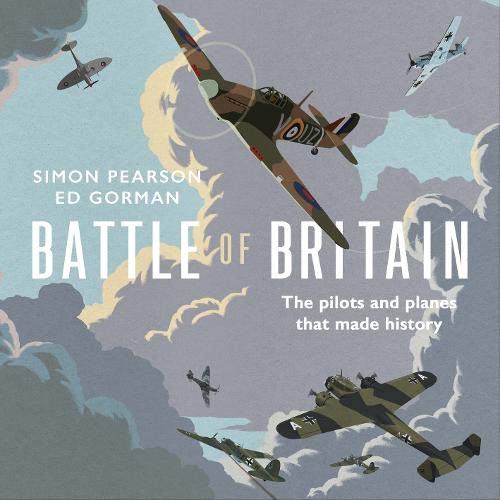 By: Simon Pearson,Ed Gorman
Narrated by: Peter Noble
Try for £0.00

An original, 360-degree re-telling of the Battle of Britain through 18 of the iconic (and some less well-known) aircraft and the pilots who flew them - British, Polish, New Zealander, German, Danish.

In Battle of Britain: The Pilots and the Planes That Made History, Ed Gorman and Simon Pearson paint a vivid picture of the men and their machines as the battle for air superiority over Britain is played out across the skies of Europe, from western Ireland to the German capital.

They tell remarkable stories involving hitherto unknown airmen from across the world who flew aircraft, including some that will be new to many listeners: the New Zealander who 'borrowed' a seaplane from the Royal Navy to set up a freelance air-sea rescue service that saved the lives of dozens of British and German pilots; the Swiss baron who destroyed nine British fighters in a day; the vainglorious Dane whose RAF squadron was wiped out trying to disrupt Nazi invasion plans; and the German bomber pilot who fought the last battle involving foreign troops on British soil since Culloden - before repairing to a pub in Kent for a pint with soldiers from the Irish Rifle, who had taken him prisoner.

These are enthralling stories from both sides of a conflict that shaped the modern world, full of courage, endeavour and above all, humanity.

What listeners say about Battle of Britain

The stories of heroism and sheer bravery and the aircraft that they operated was a joy to listen to. Thanks.

A collection of fascinating stories about individual pilots and their aircraft who fought during the Battle of Britain. Each individual is brought to life and their wartime and personal experiences explained. Their aircraft are also well researched and thoughtfully assessed. If you want to gain insight into the people and planes on both sides who fought in what was probably the defining battle of the second world war here is a great way to start.