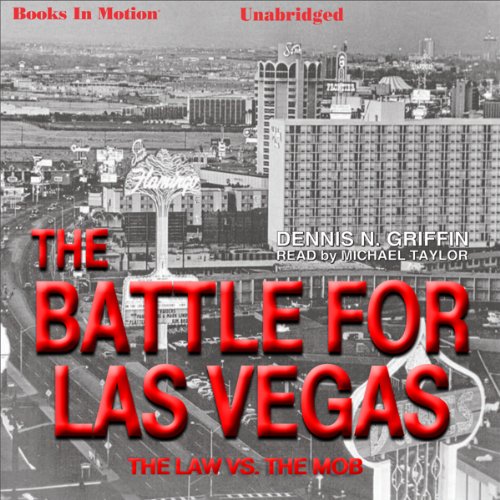 By: Dennis N. Griffin
Narrated by: Michael Taylor
Try for £0.00

In the 1970s and thru the mid-1980s, the Chicago Outfit was the dominant organized crime family in Las Vegas, with business interests in several casinos. During those years the Outfit and its colleagues in Kansas City, Milwaukee, and Cleveland were using Sin City as a cash cow. Commonly referred to as the “skim,” unreported revenue from Outfit-controlled casinos was making its way out of Vegas by the bag full and ending up in the coffers of the crime bosses in those four locations.

The skim involved large amounts of money. The operation had to be properly set up and well managed to ensure a smooth cash flow. To accomplish that goal, the gangsters brought in a front man with no criminal record to purchase several casinos. Allen R. Glick, doing business as the Argent Corporation (Allen R. Glick Enterprises) purchased the Stardust, Fremont, Hacienda, and Marina. They next installed Frank “Lefty” Rosenthal as their inside man, and the real boss of the casino operations. Rosenthal was a Chicago native and considered to be a genius when it came to odds-making and sports betting. Under Lefty’s supervision the casino count rooms were accessible to mob.

What listeners say about Battle for Las Vegas

Great content; however, I wish there was more content. being raised in Las Vegas I remember a lot of these events. My family spent a lot of time at the Stardust [and at the homes of many of the bosses] in the very early 80's [back when the Silver Slipper was next door]. My mother worked there as a pit boss, i would be in the arcade and men in suits would just bring me buckets of quarters to play games and my Godfather played professional poker there until Wynn opened the Mirage. The stories I have heard about those days would make me think there is so much more that could have been covered in this book. overall it was good, left me wanting more ....... just too short.

I highly recommend this book. Appears the author did his research. On thing that stuck out was when Tony Spilotros voice was read to me it was hilarious. You'll see what I mean when you hear it.

I love hearing about Vegas and it's hay day. Story was good and in depth. Performance lacked. Worth the buy overall.

BEST: Inside info.
LEAST: Nothing in particular was a turn off;

What other book might you compare Battle for Las Vegas to and why?

No one scene in particular;

Do you think Battle for Las Vegas needs a follow-up book? Why or why not?

Great story and easy to relate to if you visited VEGAS in the mob dominated period. Like it or not...VEGAS was a better place when the mob was running things.