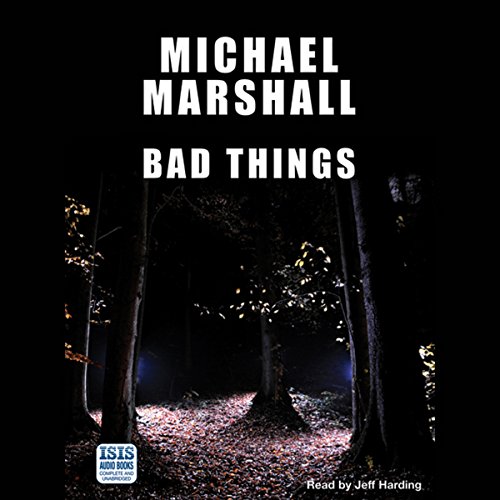 By: Michael Marshall
Narrated by: Jeff Harding
Try for £0.00

One summer's afternoon, four-year-old Scott Henderson walked out onto a jetty over a lake in Black Ridge, Washington State. He never came back. John Henderson's world ended that day, but three years later he's still alive. Living a life, of sorts.

Until one night he receives an email from a stranger who claims to know what happened to his son. Henderson returns to Black Ridge, unleashing a terrifying sequence of events that threatens to destroy what remains of everything he once held dear.

Bad things don't just happen to other people - they're waiting round the corner for you too. And when they start to make their way in, you won't know until it's far too late.

"This is ferocious story-telling of the highest order, with corkscrew twists and turns that make it deliciously scary as the secrets unfold." ( Daily Mail)

What listeners say about Bad Things

A very good thriller with supernatural elements and an atmospheric sense of dread.
Not as good as any of his full bore sci-fi, but it's got an interesting premise and a satisfactory ending.

Bad Things - Bad Purchase
I don't know why this book was under category suspense , think it would be better categorised as paranormal
I should have given up on the book well before the finish.
I picked it mainly because of narrator Jeff Harding who is brill, but even he could improve what this book was all about, could I DID NOT GET IT, it was very wordy but I didn't understand what was going on.
I could return this book & get a credit but I would like another reader to hear my views.

Great book. Excellent narration. I am happy with the purchase of this book. I recommend it.