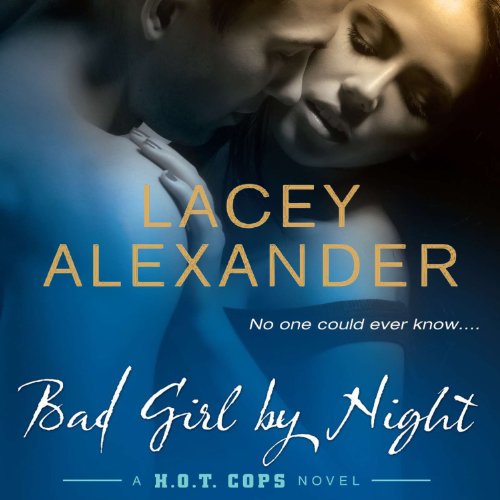 By: Lacey Alexander
Narrated by: Julia Duvall
Try for £0.00

A steamy new series that will have fans on lockdown. Meet the H.O.T. cops, a group of alpha males trained in law enforcement - but naturally skilled at the art of pleasure.

The people of Turnbridge, Michigan, see Carly Winters as the respectable-yet painfully single- good girl. None of them knows what she does miles away, where she becomes Desiree, a seductress who lures men into nights of heated passion. Until the day she's introduced to the new cop in town - Jake, one of the men who fulfilled her darkest fantasy. His arrival turns her safe world upside down. Carly's good and bad girl personas clash, and she must decide who she needs to be...

What listeners say about Bad Girl By Night

Holy Hotness ! This book is as Hot as Hell

Holy Hell! Okay so this book kind of caught me off guard. It’s not that I didn’t love it, which I did, but the emotions and the hot sex was just chart topping. This book is just more than a steaming romance but starts off with a big explosion!!!! Getting involved with the characters was not hard, they became so lovable in a way. Carly Winters lives in a boring little town called Turnbridge where everyone knows everything about everyone. She is known not to date, but these people of her hometown don’t know that during some nights she, Carly turns into her alternate personality and calls herself Desiree. Desiree is different from Carly. She dresses up in more fitting clothes and travels to a town nearby to have hot and anonymous sex. And it really is some hot sex. In a bar one night she meets Jake and his friend Colt and they have one of these hot nights. What she doesn’t know is that this might all come out to play more differently than she expects.Jake is a newly hired officer in her small town. He wanted a change from the big city. One day he is eating lunch and is introduced to Carly. He looks into the eyes of a woman who left his bed while he was sleeping and he never thought he would see her again. Jake can never forget Desiree and the hottest sex of his life. He is shocked beyond belief when he sees her and finds out that her name is actually Carly. Jake is determined to uncover Carly’s secrets and make it back into her bed but of course Carly is scared that everyone will find out her deepest secret.Now believe me there is a plot, so do not worry. It actually becomes into kind of an emotional one when they finally get together. The scenes between these characters will more than set you on fire. I have already downloaded book two - Party of Three - and I'm so looking forward to getting stuck right into it.... :)

This book is a steaming romance that starts with a bang! I was surprised at how deeply involved I became in the lives of the two main characters.

Carly Winters is boring and predictable to the people of her home town of Turnbridge. She never dates and her past relationship failed because she can't `let go.' But little do these misguided residents know of Carly's alternate personality - Desiree. Desiree dresses up in sexy tight fitting clothes and finds men for a nights of hot and anonymous sex miles away. One night she spies Jake and his buddy Colt and they share a wild night of no holds barred sex. Carly is happy to have scratched her `itch,' but to her severe dismay, it comes back to bite her when she discovers Jake is the newly hired officer in her small town and that he recognizes her!

Jake can't forget Desiree and the hottest sex of his life. He is shocked when he sees her and finds out that her name is actually Carly. Jake is determined to uncover Carly's secrets and get her in her bed!

This scorching book is a gem! Sympathetic characters and a real plot quickly got me involved in their relationship.

OKAY…LOTS OF SEX, LITTLE OF STORY

I liked the ending; I liked both characters and the introduction of the other hot, alpha cops but thought some of the sex (i.e., the boat on the lake; exhibitionism) was a bit over the top which, according to the content of the story was no doubt purposeful, but a bit much for me. Don't get me wrong, I'm no prude nor am I squeamish when it comes to MMF or MMMF action, but the story surrounding the sex seemed lacking.

Not being an author/writer it is difficult to know, however, I would have liked it if there had been more drama or emphasis surrounding the divulging of secrets. When told to each other, especially with Carly was telling Jake her secrets, it seemed like, by lack of emphasis and inflection, she was telling a story about a walk in the park and stubbing her toe, nothing bigger than that.

Narration was pretty good. It was not the best female narrator I've heard but certainly not the worse by far. At least JD changed her voice from female to male when called for.

Was Bad Girl By Night worth the listening time?

Yes, if only to see what was going to happen in the end.

Don't know much about this author but it seemed like there wasn't much excitement or energy expended on this book. I will, though, listen to the one about Rogan in hopes that it will be better. I realize the reviews weren't as good as this one, but you never know. Lately I listened to books with great reviews that I wasn't able to finish, mainly due to a really bad narrator.

Not one bad comment can be made of this Book

Lacey Alexander's writing is a pleasure to read. With a narrator like Julia Duvall, spectacular to listen to. This is the story of two people who share the same childhood traumas that impact them for the rest of their lives. Its content is their meeting and their becoming acquainted with who they truly are and how it is they help one another. The struggle seems as though it will not have a good ending, but even though not all goes our way endings can be what is best for us.
This book is a romance and the content is heated and if explicit sexual scenes are not tolerable for you, they you will not want to listen to this. I found this book captivating and it will be one that I will listen to again.

Another favorite from Lacey Alexander

Hot, hot, hot. I love this book. Emotional struggle, great sex, and sweet details make this a very enjoyable read. The narrator does a beautiful job throughout.

Let me first say, I love sex in the stories I listen to and often, the raunchier the better. So it’s very, very telling that even I thought there was too much sex in this story. But it helped me learn that, apparently, I like a bit more substance with my sex. I liked that Carly, the h, was strong and that there was a bit of struggle in her coming together permanently with Jake, the H. I also liked that they were “regular” people, w/o wealth or power beyond the common social structures. Carly made furniture, and Jake was a policeman. There were at least 2 menage (M/M/F) sex scenes in all of the sex, and the sex was explicit. Carly loved performing oral sex, and there was one act of anal sex, I think. It may have been 2, but I’m unsure; there was just so, so much sex. As a result, some of it became repetitive too. There are only so many options for variety with sex. And this story didn’t include any BDSM stuff, though they used handcuffs 2x, I believe. There was so much sex that the author was having to try to reach for some variety. It still didn’t work for me. I began to forward through much of it, which is unusual for me. In between the sex, the story was ok. I wish that the author had focused more on the story b/c it wasn’t a bad one. My one exception to this is the way the author handled the subject of child molestation, but her attempt was not a total wash. It was just shared a bit too easy and overcome or handled in their lives a bit too easily as well, it seems. There were some struggles, but it still seemed a bit too pat, simplified. I think I’m done w/ this author, but she might appeal to some others.

Much Better than Expected