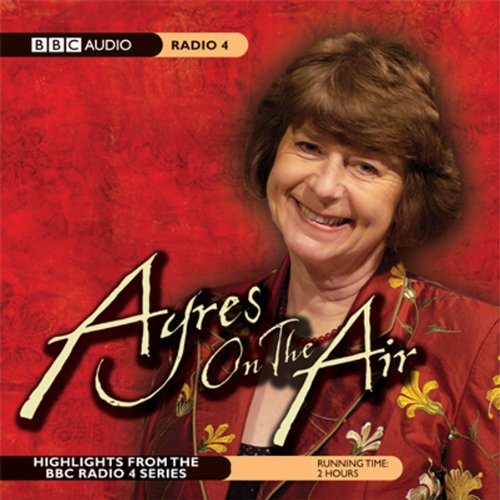 By: Pam Ayres
Narrated by: uncredited
Try for £0.00

Writer, poet, and broadcaster Pam Ayres has been making her fans smile for more than 30 years since her first television appearance on Opportunity Knocks. This recording is taken from four of Pam's live shows for her BBC Radio 4 series Ayres On The Air and is packed with her usual mix of comic poetry, prose, and droll observations on life.

Pam Ayres has recently been "rediscovered" via her appearances on That Reminds Me, and Loose Ends, and Ayres On The Air has been celebrated on both Pick of the Week and Feedback. She regularly tours both the UK and abroad, performing to sell-out audiences. Here, Pam can be heard delighting her public on such topics as holidays, families, ageing, and country living. With sketches about being "Topless at 60", getting shingles up the Orinoco, and the joys of buying a tractor, and poems including 'The Wonderbra', 'Littering', 'Poor Dad', and 'The Voice at the Foot of the Stairs', this collection showcases one of the nation's most popular poets at her very best.

What listeners say about Ayres on the Air

Where does Ayres on the Air rank among all the audiobooks you’ve listened to so far?

This is brilliant. Pam Ayres is one of the funniest people I came across. This collection of selected performances she did for the BBC is laugh-out-loud material.

What other book might you compare Ayres on the Air to, and why?

This is incomparable. Pure Pam Ayres.

Which character – as performed by uncredited – was your favourite?

As this is a selection from Pam Ayres' BBC show, it is unfair to be listed as "uncredited". All the performers who worked on this deserve a recognition. They brought to life Pam's writing exquisitely; the lady herself performing her poetry is side-splitting and, as any poetry on occasion is, thought provoking as well (e.g. "The Battery Hen").

Pam Eyres: Ayres on the Air

This is great entertainment. I listened to it on a long car journey and chuckled all the way!

Hilarious still, everytime I listen to it.