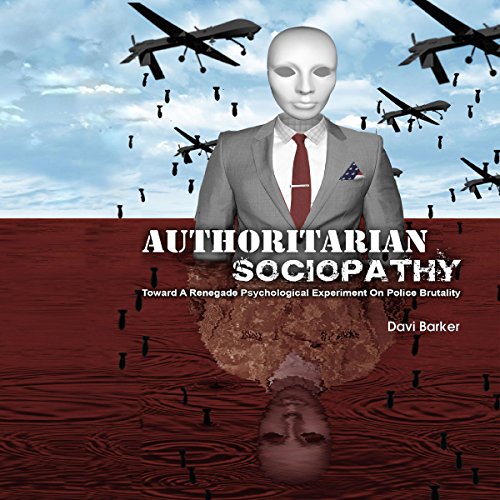 Numerous studies have shown us that those given authority are more likely to lie, cheat, and steal, while also being harsher in their judgments of others for doing these same things. Science tells us people with power feel less compassion for the suffering of others.

This is the fifth draft of a renegade psychological experiment on authoritarian sociopathy, specifically on police brutality. We aim to show the world beyond a shadow of a doubt, that power corrupts absolutely, and corrupt authority deserves no obedience.

What listeners say about Authoritarian Sociopathy: Toward a Renegade Psychological Experiment

Would you listen to Authoritarian Sociopathy: Toward a Renegade Psychological Experiment again? Why?

Yes. The ideas presented here are necessary to help understand why those who occupy positions of power defy their own moral code.

What other book might you compare Authoritarian Sociopathy: Toward a Renegade Psychological Experiment to and why?

Unlike anything I've read before.

Which character – as performed by Darryl W. Perry – was your favorite?

Anyone concerned with our loss of liberty should take the time to listen.

First; I may not agree with the opinion regarding the importance of maintaining the integrity of the “currency” in use; the economical burden is far beyond sovereignty and the implied criticized wealth distribution. Now to the main subject of this book; the approach to such problem is highly needed in countries experiencing, being influenced by, or had history of subjugation to an authoritarian regime of any sort; being useful for either side of authority effect. The estimated cost is absolutely justified and rather humble, given the benefits and the magnitude of inspired future researches.

The reader sounds like a news caster puking the local news. He phrases every sentence the same way. Its annoying. That voice is the reason i don't watch the local news.