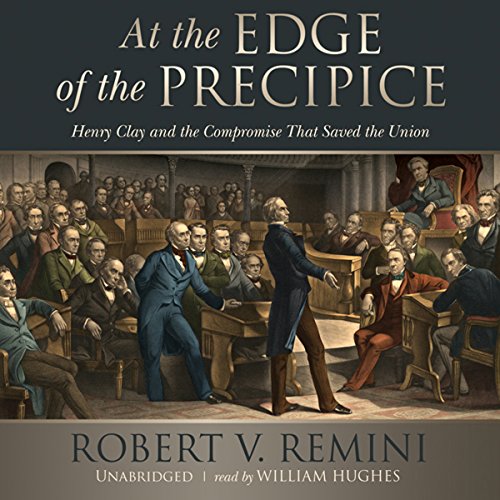 At the Edge of the Precipice

A National Book Award-winning historian brilliantly portrays Henry Clay’s heroic brokering of the Compromise of 1850, with its timely message about bipartisanship in times of crisis.

It has been said that if Henry Clay had been alive in 1860, there would have been no Civil War. Based on his performance in 1850, it may well be true. In that year, the United States faced one of the most dangerous crises in its history, having just acquired a huge parcel of land from the war with Mexico. Northern and Southern politicians fought over whether slavery should be legal on the new American soil. After a Northern congressman introduced a proviso to forbid slavery in any territory acquired from Mexico, Southerners threatened to secede from the Union. Only Henry Clay, America’s great compromiser, could keep the Union together, saving it from dissolution for 10 crucial years.

In this masterful contribution to American history, Remini explores Henry Clay’s final and most important act of bipartisanship.

“Remini breaks down the debate into palatable pieces for the lay reader….A fresh look at the value of compromise in advancing the general interest.” ( Kirkus Reviews)
"Award-winning historian Remini…give[s] an informed and lively recounting of the (in)famous Compromise of 1850….showing how the ‘great men’ like Henry Clay tried to manage sectional reconciliation and their own ambitions." ( Library Journal)

What listeners say about At the Edge of the Precipice

For those of you wondering how inefficient, blindly political and self-interested members of Congress can be today, you would benefit from understanding how things were in Congress, and the Administration, in the 1840s and 1850s, when the issues facing the country were, if anything, magnificently larger & scarier, and the movement to address them were similarly inefficient, blindly political and self-interested. It took the courage of 3 old lions of the Senate, all 3 on their last legs, politically and in terms of their lives, Calhoun, Webster and Clay, to get movement going.

The Compromise of 1850 did not stop the move toward war. Just slowed it down. Of course, people in 1850 (including the 3 lions) could not have known that.

The book is very well written (Remini is an excellent historian) and very well read. Recommended.

This is a solid book. It tells the story of Congress trying to come up with a solution to the weighty problem of slavery. The author does a good job of telling all the guises that the debate came under and points out, strongly, that slavery as an institution was pulsing away beneath all the major issues debated and compromised on. He also did a good job of pointing out how "omnibus bills" (a phrase coined during the debates discussed) tend to unite opposition more than solidify support.

My one major criticism of this book is it tends to sugarcoat the failure of the 1830's-1850's Congresses for not addressing slavery more directly. At the end the author tries to argue that the compromises negotiated during this time allowed time for the "north" to solidify itself as the major concentration of population, industry and other advantages that allowed it to win the Civil War. While on the one hand this is likely true it still does not absolve them completely of a significant moral failing in my opinion.

Even with this considered, it is well worth reading as a showing that, even when divisive issues reign if leaders have strong personalities and want badly enough to work it out, they can usually find a way to muddle through.