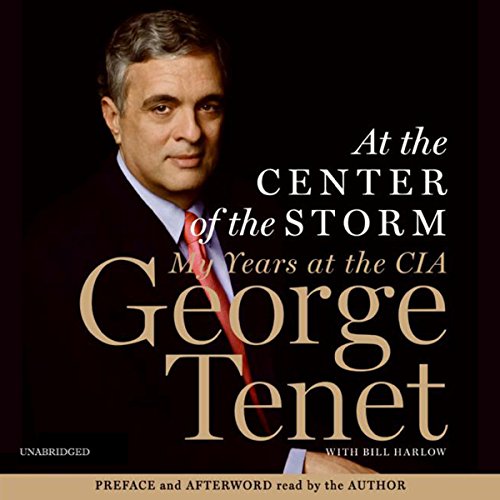 At the Center of the Storm

My Years at the CIA
By: George Tenet
Narrated by: Arthur Morey
Length: 18 hrs and 27 mins
Categories: Biographies & Memoirs, Politics & Activism
4.1 out of 5 stars 4.1 (19 ratings)

At the Center of the Storm

In the whirlwind of accusations and recriminations that has attended the post 9/11 world, one man's vital testimony has been conspicuously absent. Candid and compelling, At the Center of the Storm is George Tenet's memoir of his life at the CIA - a revelatory look at the inner workings of America's top intelligence agency and its dealings with national leaders at home and abroad. With unparalleled knowledge and breadth, Tenet illuminates how the country was prepared, and in some respects was not prepared, to deal with a world full of new and deadly threats.

Beginning with his installation as director of Central Intelligence in 1997, Tenet unfolds the momentous events that led up to 9/11: his declaration of war on Al Qa'ida, his worldwide operational plan to fight terror, his warnings to White House officials, and the plan for a response laid down just six days after the attack. Tenet also reveals the CIA's efforts since 9/11 to hunt down the fugitive members of Al Qa'ida's leadership.

In his gripping narrative of the run-up to the war in Iraq, Tenet provides fresh insights and background, including a privileged account of how the famous "sixteen words" made it into the president's State of the Union speech, the real context of his own now-famous "slam-dunk" comment, and the CIA's views of the rise of an Iraqi insurgency. Finally, as the country digs in for a prolonged war, he gives his thoughts on how we can forge a more secure world.

What listeners say about At the Center of the Storm

What made the experience of listening to At the Center of the Storm the most enjoyable?

The pace never stopped. Things about recent history I never knew .... and neither did the media at the time.

He's a far better narrator than George Tenet the author! Had the right timbre - I thought he was George Tenet!

This is a reference work for future academics.

More useful and informative than expected it to be

You have to have sympathy for the person in this challenging role. Gives you a sense of internal power struggles at home as well as abroad. Disappointing assessment of Israel / Palestine however only to be expected with the lobby groups at play in US politics. Despite this, many prognoses for the future are fair and balanced in their full depressing glory.

I am the first to take anything said by a politician or political appointee with a huge grain of salt. So I have done so with George Tenet. That being said, I have to admit that this memoir which covers Al Quaeda, 9/11, and the wars in Afghanistan and Iraq is believable, complete and, surprisingly, not self-serving. Well written with eyes of objectivity amazingly wide open, Mr. Tenet admits his and his organization's (CIA) victories and defeats, triumphs and mistakes. This memoir is nicely narrated, well paced and well produced. This book will sit well with Republicans, Democrats and Independents. No Bush bashing here, Mr. Tenet focuses on the facts. He is obviously not a fan of Cheney or Rumsfeld but he does not allow his personal issues to cloud his past. The story here is obviously from his point of view, how HE remembers things, but he does provide documentation and explanation. This book is NOT for those looking for a castigation of Bush and his administration. This is Mr. Tenet's attempt at a historical recreation of his tenure as DCI 1996 - 2004. I rarely give a book 5 stars (check and see - maybe 3 times over the last 10 years/500 books) but I give this recommendation without qualification or hesitation.

Well Worth the Read

I was thoroughly interested in hearing the perspective of this participant in the goings-on before and after 9/11. It's sometimes difficult to find one's own opinion amidst the sound-bites, slants, takes, and, imo, downright lies. Mr. Tenet, as well, has his "slant"; but it's an honest one and can be deciphered without the difficulty of much confusion and muddle. Thank you, Mr. Tenet!

I looked at this book for a few months before picking it up. I am glad I did. I follow politics pretty closely and was fairly unimpressed with what I saw coming from Tenet and the CIA, but he puts up a pretty good defense of himself in this book while doing something few big names like to do...admit they made a mistake or did something wrong. This book gives great insight and has shifted some of my opinions of the government, though my views on the political administration is still firmly affixed. If you want a political diatribe this book will leave you jilted. If you want a pretty fair assessment this is a good start.

As good an explanation as you'll get

I must admit that I've gone from being disdainful of George Tenet, to being an admirer. This wasn't the book that changed my opinion -that was "The One Percent Doctrine", Ron Suskind - but this book confirms my feelings.
There are no new startling revelations in this book, but it is probably the best insider view we will ever get during a critical time in world history.
Why only 4 stars? The narration and writing style quite match. Making the book slow going at times, and at other times making the authors quips fall very flat

George Tenet was at the center of the storm for seven years. He explains how an executive order did not allow U.S. forces to kill OBL before 9/11, how the CIA knew a major terrorist act was coming soon, but did not know where, and how quickly U.S. intelligence agencies used information gained in the 9/11 attacks to stop further attacks. His most strident comments, though, are reserved for the Bush sycophants working under Cheney and Rumsfeld who began planning the invasion of Iraq and Iran even before taking office, the mindless conduct of the war and the stupid policy decisions implemented afterwards. It's pretty clear he disagrees with the decision to invade Iraq to some degree and disagrees with how the "peace" is conducted to a greater degree.

The book is long and is well narrated by a professional speaker. It is, however, a difficult read because it covers seven years of history and politics. Plan to read it over a considerable period of time.

Where does At the Center of the Storm rank among all the audiobooks you’ve listened to so far?

I love to read memoirs of those who played leading roles in history.

General Pervez Musharraf's coming to Jesus moment when Tenet said, " We stole these nuclear weapon blueprints from AQ Khan, and he stole them from you." WOW, that was gold!

It's a perspective that really needed to be told. Mr. Tenet demonstrates clearly what he was faced with and gave some incredible insight that only he could know. However, some aspects were designed with a formal defense in mind...I can't blame him. He took a lot of heat.

In the beginning of the book he mentioned that he would talk openly and fairly about his successes and failures. By the end of the book I was still looking for the "failure" he mention, I was expecting an act of contrition...a coming to Jesus moment about his part in the problem of WMD intelligence. There was none of it. Somehow I feel cheated but I did find the book interesting, well organized, and quickly paced.

As Mr Tenet was a major player during 9/11 and the Iraq invasion, and yet not one of the principals you normally get to hear in the media, I was interested in hearing his side of the story.

The book appears well written and holds interest. As an audio performance, it holds interest throughout and flows well. Some of the edits are a bit sloppy as you can hear the reader's voice change in timbre as re-reads have been inserted. But this is not objectionable.

By far the most interesting part of the book is the afterward, spoken by Mr Tenet himself. Here, he ponders on the future, using his past experience as a guide and, at least for me, hits every nail on the head. The things he says in print are things that I have been verbalizing to acquaintances for years.

This is not to mean that I blindly agree with Mr Tenet:
1) No matter what he says in the book, 9/11 was missed under his tenure. He may have seen the dots, but without being able to put them together, he lost the game. And that's what it's all about: winning the game.

2) He also (admittedly) got it wrong regarding WMAs in Iraq, which, although it was not the Bush Administration's sole reason for invading Iraq (the others being even more ridiculous), was the reason being fed to the public to justify invasion.

In both cases, he bears responsibility, at least in part, for the deaths of many people, which he really has yet to admit to.

Readable, but misses the point

After reading Tim Weiner's excellent "Legacy of Ashes: The History of the CIA", I was eager to hear the CIA story from an insider's perspective. Unfortunately, Mr. Tenet spends most of the book defending CIA employees' dedication, commitment and patriotism instead of giving close examination to their oft-repeated failure to identify threats to this nation and its people. The CIA's reduction in budget and manpower in the years following the collapse of the Soviet Union was more related to a realization by the nation's leaders that even with huge multi-billion dollar appropriations, it was ineffective and hide-bound. It's not at all clear that even with better funding, CIA would have predicted any better than it did the rise of Islamic terrorism and the 9/11 attack. the Agency was, after all, a huge and secret bureaucracy more interested in protecting its own personnel and in its own survival, than in fulfilling its mission. We can only hope that this is not still so.

His side of the story

Was hoping this book was better. Someone I know worked with George and said he was a funny and interesting guy. This book was simply his explanation of why he did what he did up to and after the 9/11 attacks. There is nothing here that will enlighten you, just a public servant wanting to preserve his own legacy.