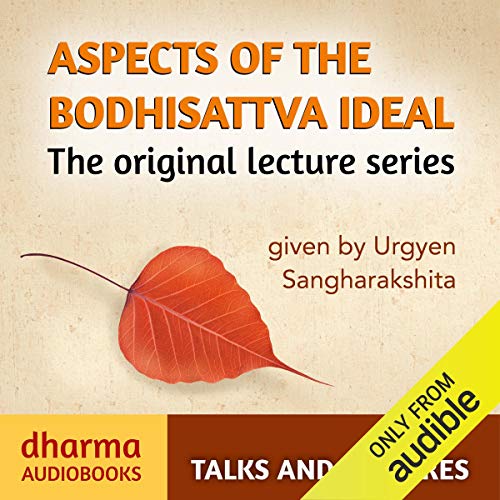 Aspects of the Bodhisattva Ideal

The Bodhisattva - one who is becoming awake or enlightened - is one of the great inspiring figures in Buddhism. The title can refer to a mythical being with qualities to which we aspire, such as Avalokitesvara, the Bodhisattva of compassion; or an ordinary person on the quest for enlightenment for the benefit of all living beings. It is a profound ideal for life.

In this important lecture series, Urgyen Sangharakshita, one of the most important leading Western Buddhist teachers, sets out the path of the aspiring Bodhisattva living in the 21st century.

How should we act? What principles should we follow? How can we balance the urge to benefit others yet follow a true spiritual path ourselves?

This clear, challenging and stimulating series of eight talks is one of the many groundbreaking lectures given in the 1960s, when Sangharakshita, having returned to the UK after 25 years in India, was setting up a new Western Buddhist movement, now called the Triratna Buddhist Community.

These talks have been remastered.

What listeners say about Aspects of the Bodhisattva Ideal