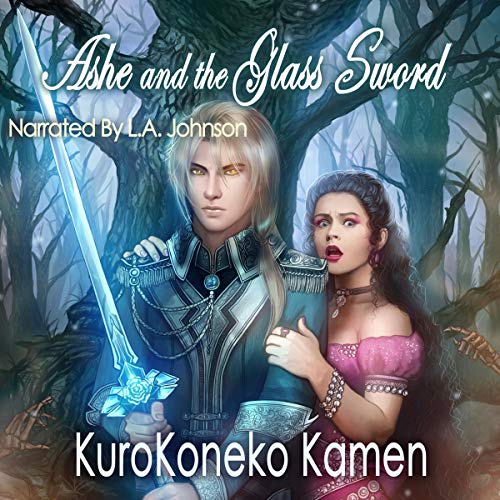 Ashe and the Glass Sword

Ashe and the Glass Sword

A gender-bent retelling of the classic fairy tale Cinderella.

A handsome, mysterious lord with silver hair and golden eyes has created quite the stir in Glass Kingdom among the female populace. They’ve granted this man the nickname of "Heartbreaker of Glass Kingdom' due to the fact that he never sleeps with his conquests more than once.

One night, while Ashe Smoldris is at a casino, an eccentric young woman wearing a unicorn mask appears, and gets into trouble when she plays a game of poker in one of the backrooms and loses. When it turns out the girl doesn’t have the money with her to pay off her debt, she almost gets herself sold off as a slave.

In a strange twist of fate, Ashe unwittingly ends up saving the princess of Glass Kingdom. Because of his daring rescue, Juleka falls in love with Ashe and starts to watch over him from the shadows. After Juleka saves Ashe from the clutches of the seductress Lady Doriana Gray, Ashe begins to develop tentative feelings for Juleka, but the dark secrets she’s been keeping from him put their bourgeoning love to the test.

Even though Ashe presents himself at the casinos in Glass City as a wealthy lord, his true identity is that he’s a slave. His mother sold Ashe to the nefarious loan shark Lord Christian Tremaine to settle her gambling debt. In order to buy his freedom back from Lord Tremaine and his sadistic sons who enjoy torturing Ashe for imagined slights, he has been whoring himself out to noblewomen.

But what Ashe really wants to be doing is to fight in the coliseum. Nobles bet on the outcome of the matches, and the winner makes a lot of money. Unfortunately, Ashe is a dullard - someone who has been born without magic, and only the magical races fight in the coliseum. If Ashe is to stand a chance in the arena against elves, witches, fairies, and vampires, he’s going to need an enchanted sword.

Ashe teams up with playboy prince Snow Flurris, and they travel to Bones Kingdom in search of Rapunzel’s Tower. Rapunzel is the best blacksmith in all of Fantasia. Will Ashe manage to convince the stoic man to forge him an enchanted sword for free?

Warning: This is a fairy tale for adults who are 18 and above and contains sex and foul language.

Ashe Smoldris is on the prowl for his next conquest at the casino. Its here he finds the older ladies who are happy to part with their jewels for a night with the strikingly handsome man. He is distracted by the sudden appearance of a naive young woman who manages to lose at cards and is being threatened into slavery. Ashe feels compelled to help her fighting the Lords and guards to help her escape her fate. This starts Juleka’s obsession with Ashe, she vows to help him which leads him onto a different path that that he envisioned for himself. I totally loved this adventure, so much happens, we really get to know Ashe and the friends he makes along the way. KuroKoneko Kamen really knows how to ratchet up the tension only she can create a hero with erectile dysfunction who likes sewing but can beat any opponent with his Glass sword . The world of Fantasia is fascinating, and I know we have only just scraped the surface. I can’t wait to find out what happens next. I voluntarily reviewed an advanced copy of this story. All thoughts and opinions are my own.

A unique twist on Cinderella

I have enjoyed this entire series. But Ashe is my favorite story. The winks at the fairytale are always fun to find, but there is so much more to this story than just a wink. Ashe is very much like Cinderella, except he is a male. Ashe has been sold as a slave, tortured and sold his own body to try to save himself. Ashe knows what he wants and will stop at nothing to get it. Until a strange girl in a unicorn mask crosses his path. Ashe must save her, yet still find a way to save himself. There is just something about Ashe, maybe because he is the underdog for so many different battles that I just loved his story. The action, magic and characters in this story are woven together so well, that this story will have you hooked. I could not stop listening. Through Ashe's adventure, we see a cameo of Snow Flurris and Rapunzel. I cannot wait to read Snow's story! I love the way KuroKoneko twists so many fairytales together.

Another great one in the fantastic series

Kurokoneko the author has written another great retelling in the series. This is book 7 . This story is a retelling of Cinderella, but with a twist .
Ashe is the lord in this story ( like Cinderella) . He’s the cook and cleans the house to his stepbrothers and stepfather . He became popular and was awarded because he saved a Royal couple . This story has it all , magic , fai , dragons and witches . The author Kurokoneko always writes a story that makes you remember your younger years .

LA Johnson performance was great . He has done this whole series , strong , steady and clear

Fairytale with a twist

Action magic wizards shifters dark elves and Dragons. What more could you want? Took me a chapter or two but I enjoyed the narration as well

Another fabulous story by this author. This is a well written story that is action packed with unique characters! I definitely recommend the Genderbent series of books because they are unique and intriguing to say the least. The author has a wonderful imagination and talent for telling a story. I definitely love and recommend this audiobook.
The narrator does a fabulous job with the characters and voices of each character and there emotions.

This is another great listen to these twist into classic fairytale. I really enjoyed listening to Ashe's story. L.A. Johnson did a good job in this narration. It definitely made this story even more interesting.

My favorite so far in the Genderbent world!

Ashe and the Glass Sword (Genderbent Fairytales Collection, Book 7) by KuroKoneko Kamen and narrated by L.A. Johnson is my favorite story by the author. If you are not a fan of the typical classics/fairytales like me, this is the book for you. I find with the Genderbent stories I never know what to expect and they are difficult to put down.

What’s it about? Ashe was a lord who was stripped of his title and now works for his step-father and step brothers as their cook and personal maid. He ends up saving a princess and a prince which leads to many adventures. The action start pretty much immediately- and there’s lots of it. Other elements include: magic, wizard, clubs, witches, Hero’s Guild, dragon, Rose Kingdom, Bone Kingdom, Apple Kingdom, Direwolves, shifters, dark elves, fairies, vampires, succubi, skeletons, love, fighting in a coliseum, sex, characters from other fairy tales, and so much more. There’s a lot going on in this book, but don’t worry, it’s not confusing, and there’s something for everyone!

The narrator, L.A. Johnson, did a good job. L.A’s grown on me for the telling of these tales and I can’t picture anyone else narrating them.

Overall I highly recommend, especially if you’ve enjoyed previous books by KuroKoneko Kamen or are looking for a fabulous, refreshing retelling of the typical fairytales, give this book a listen.

Parental guidance/trigger warnings: These are fairy tales for adults. Weapons (guns, sword), sex (in a good amount of detail), forcing people to do things against their will, suicide of child, attempted murder, abuse (physical and mental), and possibly other things I’m forgetting. Language used: Fx69, Sx51, hell x43, damn x11.

Did the story keep me engaged: yes
Was there anything I found annoying: no
Did I feel an emotional connection to the characters: yes
Would I listen to it again: yes

Action packed with good pace and lots of fun and interesting characters. Another well constructed story with wonderful detail painting vivid and colourful scenes. I thoroughly enjoyed Ashe's journey as he becomes one of Fantasia's hero's,

L. A. Johnson did a good job. His narration throughout this series keeps getting better.

I'm loving this series, each book's cover brilliantly captures each story, and I look forward to the next one.