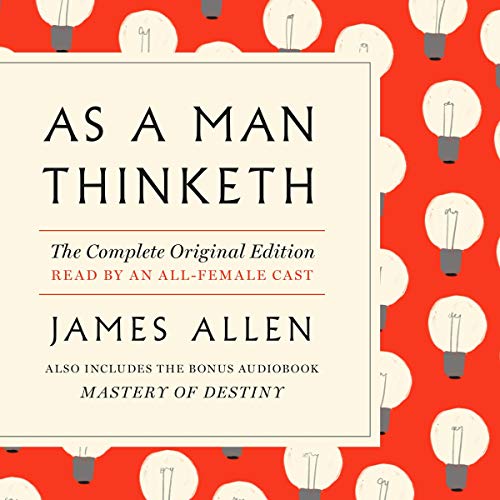 As a Man Thinketh: The Complete Original Edition and Master of Destiny

By: James Allen
Narrated by: full cast,Thérèse Plummer
Try for £0.00

Read for the first time by an all-female cast

James Allen’s revolutionary treatise on the power of thought, combined with the bonus audiobook Mastery of Destiny.

Originally published in 1903, James Allen’s As a Man Thinketh reveals the fundamental truth of human nature: “A man is literally what he thinks.” Allen’s deceptively simple principle has changed the lives of millions of readers and listeners, making As a Man Thinketh a classic best seller for decades.

Allen explains that our character, identity, ability, and success are all determined by the thoughts in our minds. Instead of finding ourselves victims of the world, there exists within each of us the ability to shape and define our own destinies. Finances, health, social status, and success are all external manifestations of the thoughts that populate our minds. Allen offers listeners an opportunity to seize control of their minds and in doing so create the lives they’ve always imagined.

This new edition combines As a Man Thinketh with another of Allen’s companion works, Mastery of Destiny. In Mastery of Destiny, Allen reveals that the natural progression of human evolution is away from the evil that results from ignorance and toward ultimate good. Combined in one program, these two audiobooks offer a revolutionary outlook of empowerment.

What listeners say about As a Man Thinketh: The Complete Original Edition and Master of Destiny

This book was written a long time ago and it sounds like somebody reading in old English. The ideas and concepts in it have been improved upon and added to in much better books. Don’t waste your time or your money buying this book there really are better versions of the same thing.

I just wander,
How could you take such a phenomenal book to narrate so disrespectfully.
Some narrators, it feels like they are chewing, eating during the narration.
I’m sorry to say but it’s disgusting to hear ( Try chapter 7).
I just don’t understand why narration quality is not being checked before distribution.
It’s just disgusting to hear narrator with something in the mouth & moreover a “James Allen” book.

I’ve never expected to experience such disrespect to the listener!

I feel blessed and honored to inherit wisdom ang guidance.. Good people who are actually strangers I never met offered this help.

Beyond boring The few chapters I endured had me thinking thus is common sense to some degree and just boring .

I found this rendition of this 1902 book very well done. Provided great amount of background information. I also recommend the prime movie on the same title.

Sooo grateful to have found out about this book that I bought the paperback as well. Wealth of knowledge and principles. I keep listening to this audio over and over.

No sound to the play button? :( For a first experience, this is not a good look.