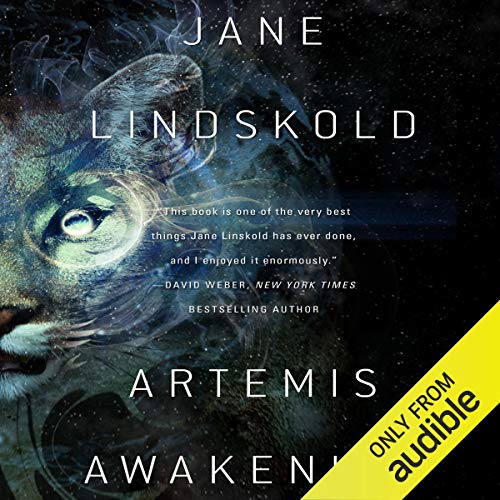 The distant world Artemis is a pleasure planet created out of bare rock by a technologically advanced human empire that provided its richest citizens with a veritable Eden to play in. All tech was concealed and the animals (and the humans brought to live there) were bioengineered to help the guests enjoy their stay…but there was always the possibility of danger so that visitors could brag that they had "bested" the environment.

The Empire was shattered in a horrific war; centuries later humanity has lost much of the advanced technology and Artemis is a fable told to children.

Until young archeologist Griffin Dane finds intriguing hints that send him on a quest to find the lost world. Stranded on Artemis after crashing his ship, he encounters the Huntress Adara and her psych-linked companion, the puma Sand Shadow. Their journey with her will lead Dane to discover the planet’s secrets…and perhaps provide a key to give unimagined power back to mankind.

Artemis Awakening delivers a suspenseful plot, complex characters, and meticulous world-building. Joe Barrett does a great job on the narration. I couldn't stop listening once I got started!

Griffin Dane, we discover, is an archeologist of the Indiana Jones variety: he set off for Artemis chasing the glory of rediscovering the mythic world that had been lost to intergalactic civilization for five hundred years. For him, this is the discovery of a lifetime... if he can ever get home again. His landing shuttle is a total loss, destroyed in a crash and buried in a rock slide.

For Andara the Huntress, finding Griffin’s wrecked shuttle is a startling discovery: off-world visitors are only distant memory passed down through the Lore of her people. Their planet was designed as an exclusive resort for tourists seeking to escape their hyper-evolved lives for a vacation in a simple pastoral setting, with all the comforts tourists could want supplied by hidden technology. However, a rival faction within the empire launched an attack on the seigneurs, or "seegnurs" as the Lore calls them. Nanobots in the atmosphere disrupted technology planetwide, and all of the seegnurs were slaughtered. Industrialization never took hold on Artemis because the nanobots continue to disrupt any technology more advanced than basic gears. They don't know what a machine looks like.

Griffin's chief quest in the book is to find a way to reactivate the seegnurs' technology to contact his orbiting ship. He travels with Andara and Terrell, another young man from Andara's village, to seek help from the Old One Who is Young. His avid interest in the seegnurs means that he is the most likely person to have the technology Griffin needs, but if the stories are true, much more is at stake than Griffin’s hope of returning home.

Adara is especially at risk because she was born with genetic adaptations from feline DNA: these types of altered people are the focus of a forced breeding program run by the Old One Who is Young in secret. Fortunately, she can rely on her puma companion, Sand Shadow, as an intelligent and capable partner. Her opposable thumbs and telepathic abilities are another legacy of the seegnurs' bioengineering.

The series has lots of possibility: there's Griffin's discovery process about Artemis; Andara's mixed feelings about Griffin and Terrell; and the disturbing ramifications of genetic manipulation, including hints about sentience on Artemis beyond the humans and adapted animals. Bring on book two!

it's a fine read but it's not going to blow you away or immerse you in the story. Also the ending was very anti climatic

One of my favorite authors

I'm so glad to see this series on audible! I adore Jane Lindskold. Her "Fire Keepeer Saga" is amazing - and I dearly hope it makes it way onto audio format someday as well. Or honestly, I'd give a credit for anything she has written.

But this book is wonderful all on it's own. There is world-building woven in so seamlessly - Artemis, is a pleasure planet left to the natives after the people who created it were annihilated in a war that took out the very technology that made them able to build such wonders. And some of those left behind hold the touch of tampering - humans and animals that have been altered.

It's fascinating and meticulously detailed. I don't want to say too much because to do so would be to give things away. But the characters are wonderfully layered and intelligent. The relationships between people make sense - and that might seem odd to write but I think everyone has probably read characters who have come together to quickly or been angry at each other for no reason.

I like Lindskold's characters, they feel real. And now I'm gleefully off to book two.

The book desperately needs an editor. Lengthy and focused on inane details to the detriment of the plot. After struggling through growing apathy to finish the book, I was greeted with a rushed action packed ending that resolves nothing whatsoever, just setting up the next volume. Lindskold is a better author than this - I expect she suffered from a less experienced editor who couldn't help her rein in her digressions.

Can't wait to hear the next one.

A great story, wonderfully narrated by Mr Barrett. The interludes were my favorite part, the poetic blending of similar and dissimilar words was lovely. Can't wait to hear the next one. ☺

The story just didn't grab my attention, and the characters seemed unreal. Maybe the rest of the series is better?

It's ok but not a great work.

Great premise, but the rest of the book just wasn't that good. It's still well written and holds a decent pace. I certainly think some others will like it a lot.

However, I thought the characters &amp; planet could have used more depth. Also, the story didn't actually go anywhere by the end. Quite a lost opportunity for any book.