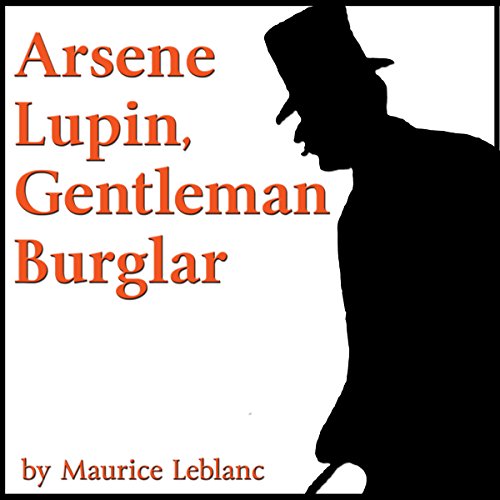 By: Maurice Leblanc
Narrated by: Walter Covell
Try for £0.00

Arsene Lupin was a massively popular Robin Hood-style thief first introduced by Maurice LeBlanc in this 1907 collection of stories.

Witty and urbane, Lupin stole from the rich through elaborate capers and gave to the poor in bursts of generosity. In one adventure, Lupin manages to rob a set of prize paintings while he is in prison through a series of delightful but plausible twists. In another tale, he pits himself against Sherlock Holmes (whose name was changed to Herlock Sholmes when Sir Arthur Conan Doyle objected).

Walter Covell adopts a genteel British accent in performing LeBlanc’s formal diction, switching capably to a Parisian accent in his pronunciation of French names and places.

Maurice Leblanc, a writer of detective fiction during the same period as Sir Arthur Conan Doyle, created Arsene Lupin, a sort of French Robin Hood. An inventive genius, a master of disguise, and an accomplished actor, Lupin operates in the choice chateaux and salons. He scorns sham and with great disdain leaves his card in a baron's residence. The card reads, "Arsene Lupin, gentleman-burglar, will return when the furniture is genuine."

The stories include, "The Arrest of Arsene Lupin", "Arsene Lupin in Prison", "The Escape of Arsene Lupin", "The Mysterious Traveller", "The Queen's Necklace", "The Seven of Hearts", "Madame Imbert's Safe", "The Black Pearl", and "Sherlock Holmes Arrives Too Late".

"Intelligent, daring, but oh what a rogue. Nothing is safe from Arsene Lupin, the intriguing, intrepid thief. Only his good friend Inspector Ganimard has managed to arrest him, but only briefly. Even Sherlock Holmes, who arrives to sort out a complicated burglary is embarrassed by Lupin's much publicized wiles. Good plots, great narration (a super job by Covell) and the wonderful Lupin create an excellent few hours of short stories." (Booklist)

An Old Favorite Made Better

I had read and liked several of the Arsene Lupin stories, so I was happy to find it in audio form, but I never expected it to be so good. The narration was delightful, making this classic as fresh and lively as when it was written. A must-have for lovers of old-fashioned mystery and adventure stories.

How I do love the clever Arsine Lupine! The book is not one long mystery, but several smaller stories about the con-man. The narration is good and the content is appropriate for all readers.

The stories are well written, but Covell does not sound very good. I don't know if it sounds bad because the narrater himself is bad or if it was just recorded badly. It's a shame that such a good batch of stories would be presented in such a bad way. Preview the audio first to see if you can get past the narration problems.

A superb sample of the Gentleman Cabrioleur adventures.These marvellous classic tales transport us to the elegant Belle Époque in the company of the supremely charming Master Criminal Arséne Lupin a man who devotes his outstanding skills to the delightful and very lucrative métier of burglary.

A great narration is the icing on the cake.

Delighted to see these books are available. I wish the sound quality was better.

I love clever stories like Sherlock Holmes and glamorous heist stories, so I thought I'd really like these. Unfortunately the narration is tiresome. The reader drones on with little dramatic effect and most of the women sound like a Julia Child impersonation from Saturday Night Live. I got bored and didn't finish. Maybe I'll try Arsene Lupin another time when there's a better narrator or I can read in the original. Walter Covell is officially off my narrators list!

Walter Covell's narration bludgeons the life out of the story. He rarely pauses between sentences, so the tempo is flat and uniform. There are few inflections in his voice, and when he does manage them, it sounds as though this is the first time he's read the book because the inflections fail to capture the meaning or tone of the text.
I am not giving up on Arsene Lupin but will henceforth only consider audiobook editions of Leblanc's work that are narrated by others.

I couldn't tell you whether this was a good story or not. I'm thinking it probably was, in a noir sort of way, but this narrator was the worst I have ever heard. Listen to him before you buy the book and know it doesn't get any better as time goes on.