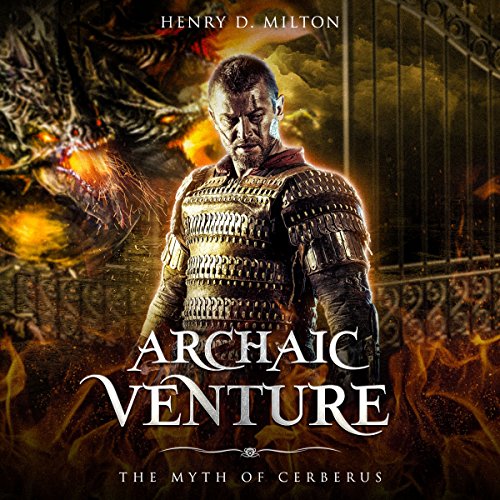 Archaic Venture: The Myth of Cerberus

A reality that could change Michael forever!

Archaic Venture, a brand new virtual reality video game, is hot off the press, and it is selling like hotcakes. However, the creator of the game, Soto Akiyama, has thrown in a twist. The game will no longer function correctly until someone defeats the evil spirit plaguing the lands of Archaic Venture. Along with returning Archaic Venture to normal, there is a cash prize that goes with it.

For Michael Maddox, a 16-year-old who suffers from cerebral palsy and a dysfunctional home life, this game, and that money, could turn his entire life around.

Come, join the adventure of a boy who knew he would never amount to much as he discovers just how much he is worth.

What listeners say about Archaic Venture: The Myth of Cerberus

Especially now with the VR game systems. What an idea of using a sensory deprivation type tank as a way to experience the "reality" of a holographic/VR game. Come on you game and game systems creators, make this real!

Easier Than I Thought!

Enjoyed a fairly light hearted approach to litrpg. Decent character building. Better quality prose than most of the genre. Will read the next in the series.

I love this book! This author could make just about any genre feel like the best story ever. Its filled to the brim with humerous and unexpected scenes and plot twists. If actual MMRPGs were as funny and enjoyable as this book, I would be a hooked gamer.

Middle of the road tale with weak narration

The narrator, Milton, sounds like Brad Garrett who just smoke five cartons of cigarettes and drank five bottles of whiskey and not in an endearing way. He speaks so slowly that I guess a benefit is that you have no issue understanding him, and that he enunciates very clearly due to his rhythm. He seems to struggle to do various voices. One voice seems to just be a little deeper than the other. No real accents exist that are discernable, nor is any real emotion is added into this storytelling. He lost me when the hobbit NPC sounded like an orc or ogre. There was no attempt to even sound like a tiny humanoid. Milton almost seems to read the story one sentence at a time. He really takes away from the actual tale, and for me a mediocre narrator can drag down a decent story. This makes it really hard for me to tell how good the story itself is, and the addition of sound effects and music DETRACTS from the narration rather than adding to it. For example, He talks about a crowd going crazy, then you hear applause, and then he picks up the narration again. It is like he waits for the clapping to die down. There are also bits of music added in at various places, usually at the start of a chapter or the end. The music starts, then stops, and there is a pause before the narration picks up again. It just starts and ends and serves no purpose other than to act as filler. Then there are parts where an annoying noise repeats over and over after the bar fight for no discernable reason. Additionally, when Michael does meet Komodo and Rampage I had no idea that one of them was a female, Rampage, as no attempt was made to even make her sound feminine. The narration was a miserable event.

The writing isn’t amazing. I found large chunks of dialogue to be stilted and almost awkward. The fights were average and did not grip my imagination at all. The story itself was your standard tale of a young man who is disabled, and decides to enter the VR world Archaic Venture so that he can experience what it actually is like to walk and make friends. The odd thing is that Michael meets two players, Komodo and Rampage, and they reluctantly let him join them in a quest to kill Cerberus, a beast that will earn them $30,000 bucks, godlike in game abilities, and a visit with the game’s creator. Michael then takes them to a bar to seek info on Cerberus and ends up getting them into a battle with a higher level player because Michael just killed his horse. The fight bonds them. Huh? What? The guy is a noob that one half of the group wasn’t happy allowing to join, and he instantly gets them into a life or death battle and they become closer? I’d have booted the noob out the door once everything finished. I saw no reason for them to bond together other than the thinking that they fought together and now are pals from the experience.

One thing that bothered me was that the book takes about five minutes to start into the story itself, and another half of an hour is tacked on the end for an additional half hour for a book preview. I don’t mind previews, but I hate it when a book’s runtime is shot up longer than what it is, and honestly it feels a lot like books stuffing. Additionally, the story is only LITPRG in the barest meaning of the word. Leveling is involved, but it is never explained, but then none of the game mechanics are ever explained, and the loot tends to just be cash, exp, or jewels. Michael jumps from being a newbie to being level thirty in a very short period of time. The fact that they get a clue on how to power level is all the explanation that we ever get. We never get any stats, character information, or the ramifications for playing various races. Michael opts to play a Drow with a suspect class as well. You never see any NPCs having a bad reaction to his race or class. The story itself is basically just a go beat the monster for fabulous prizes quest. There’s not a lot about this story otherwise. Before I got this audiobook I looked at the reviews of this on audible, because I have really seeking a great LITRPG short story, and saw a lot of positive reviews, but they were very short, with not a lot to say. After listening to this I have to wonder what they were listening to. For me, this book was more of a fizzle than a sizzle.


Even though I did receive a promo code for this review it in no way influenced my considerations of the material, and in fact, inspired me to be more honest. Getting a code generally makes me harsher as a reviewer as I am more often concerned what someone like Me will decide based on my review.

As seen on the LITRPG AUDIOBOOK PODCAST, please check it out on Youtube.com

Author/Narrator would both benefit from education.

Gotta love it when the narrator gives up midway and stops editing.

Author: show, don't tell. Go look up what that means. Most of these chapters were exposition, made confusing by switching verb tenses mid sentence. And what's with the page-long disclaimer on the first page? Was it because you insisted on using existing brand names like Exxon and Oculus Rift and Facebook and PlayStation4?

Narrator: Enunciate. Listen to yourself. Your character voices were interesting but you seem to get lazy and slur a lot. When you said "facts" it sounded like a homophobic slur. Also, if you're going to get all experimental with music and sound effects, don't make them so loud that we can't hear the wizard's name when he first introduces himself. Even if you are bored with the plot, go back and edit your mistakes. Don't punish the audience just because you're in a bad mood.

narrator is horrible. no feeling or grasp of the situation, and repeats a lot.

the story is equally bad. it is the pumpkin spice of litrpgs. just some basic author trying to make quick cash on a rising genre. it has nothing special. a kid logging into a game with a basic MMO experience. 3 hours long and 3 battles. the worst I've read or listened to so far. I want my credit back

I can see where it might be going but i just felt it kind of slowed the pacing down a bit. Otherwise, a solid entry into the litrpg genre. I think this is a solid start to ap promising series

It's narrated by the fantastic on Wilkins (honestly one of my all time favorite narrators anymore). All in all, this was a really enjoyable listen.

It can be a little distracting trying to listen to the descriptions while trying to reorganize the information correctly, and it happens every time there is a skill description.