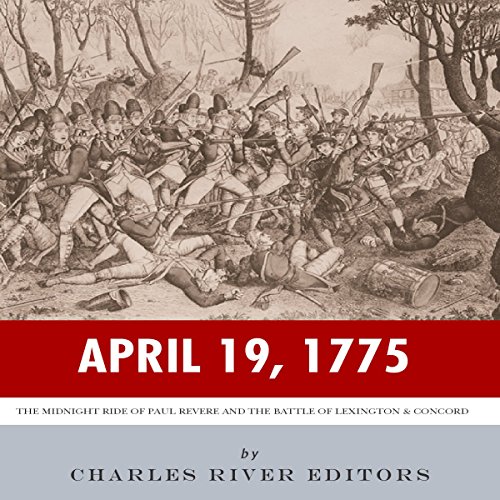 April 19, 1775: The Midnight Ride of Paul Revere and the Battles of Lexington & Concord

"Out started six officers, seized my bridle, put their pistols to my breast, ordered me to dismount, which I did. One of them, who appeared to have the command there, and much of a gentleman, asked me where I came from; I told him. He asked what time I left . I told him, he seemed surprised, said 'Sir, may I crave your name?' I answered 'My name is Revere.'" (Paul Revere)

April 19, 1775, was one of the most momentous days in American history. Over the course of nearly 18 hours, a morning that began with midnight riders spreading an alarm about a British raid headed for Concord would lead to the British column fleeing for their lives. By the time the sun went down, 10 years of strife between the 13 colonies and Great Britain finally boiled over into revolution.

In the wake of the revolution, the importance of April 19, 1775, became clear to everyone, and the legends and mystique surrounding that day have grown ever since. That day made an icon out of Paul Revere, who would have been greatly surprised at the end of his life if he had known he would become famous for his midnight ride. As a fervent and well-connected patriot who was part of Boston's intelligence network, Revere was sent on the ride toward Lexington along with William Dawes, with the intention of warning the countryside that British troops were heading that way.

What listeners say about April 19, 1775: The Midnight Ride of Paul Revere and the Battles of Lexington & Concord

This sounds exactly like a computerized voice reading Wikipedia entries. There are much better options for this material.

What was most disappointing about Charles River Editors’s story?

Stultifying content that turned an exciting story into a ponderous slog.

I do not believe the narrator was a human.