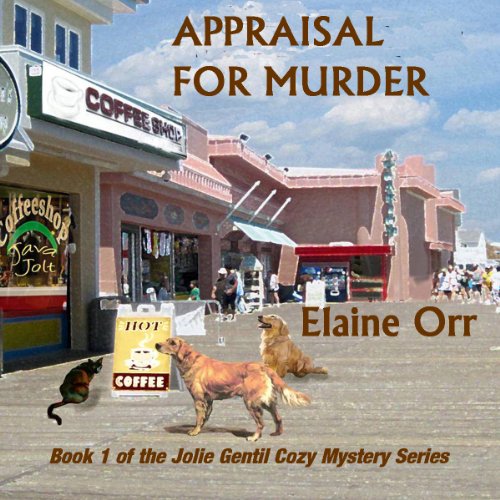 How can a real estate appraiser in a New Jersey beach town get in this much trouble?

If your name translates to "pretty nice" in French, you've probably gotten used to being teased. That doesn't prepare you for finding out that your soon-to-be-ex-husband has a gambling problem, raided your assets, and embezzled from his bank.

Jolie Gentil moves to Great Aunt Madge's bed and breakfast at the Jersey shore, taking her cat, Jazz, and joining Madge's pair of prune-eating dogs. Jolie does not view this as a retreat, just a smart change. She had no idea her life was about to get even more complicated. Jolie is reestablishing friendships with Scoobie and Ramona, dodging low-level wise guy Pedone, and (oops!) finding a dead body. The late Ruth Riordan is Aunt Madge's closest friend and mother to Michael, a former arrogant classmate who can still push all of Jolie's buttons. Jolie and Aunt Madge seem to be the only ones who think the police are wrong in accusing him of his mother's murder. Soon, the mundane work of appraising real estate and dodging suggestions that she go to the 10-year high school reunion becomes mixed with calls from reporters, scary suggestions from Pedone who wants her to repay her ex-husband's gambling debts, and requests that she help the local busybody with First Presbyterian's social services work. And there's still Scoobie, the high school friend she hung out with most. With his blue jeans and longer hair, he's the antithesis of oil company executive Michael, and much easier to be with. His haunting poetry reflects how different his life has been since Jolie knew him. Jolie must balance her fear of Pedone, conviction that Michael is innocent, and friendship with Scoobie. Her growing list of other possible murder suspects includes Michael's soon-to-be ex-wife and a couple other beneficiaries of Mrs. Riordan's will. Those suspicions don't include Scoobie, but he makes it to the police department's list. Jolie tries various ways to prove both friends innocent. But will Pedone's plans leave Jolie alive to find the truth?

New version of the audio available

Would you consider the audio edition of Appraisal for Murder to be better than the print version?

Hi folks, this is the author. I promise, I'm not reviewing my own book! I wanted to let people know that the audio has been redone. There were some poor reviews on the narration, and Paula Faye Leinweber is very professional and redid much of the book. It was the first book for both of us and we learned a lot! Audible will let you download the new version. Thanks!
Elaine Orr

What does Paula Faye Leinweber bring to the story that you wouldn’t experience if you just read the book?

Paula has redone much of the Audio for "Appraisal for Murder."

You can get into a lot of trouble at the Jersey shore!

A good start to the series

Appraisal for Murder by Elaine Orr opens with Jolie Gentil’s having moved in with her Aunt Madge to Ocean Alley, a small tourist beach town in New Jersey, after the arrest of her husband for embezzlement in order to repay his immense gambling debts. Further, Richard drained all their joint accounts, leaving Jolie to start life over in the town where she lived a year and attended 11th grade. She gets a job as an appraiser of property and makes a few friends in the community, which is a challenge for Jolie, as she had been so wrapped up in her own life’s challenges during high school that she made very few friends. But she approaches those still around in trying to start over with them from the perspective as an adult, as the class’s 10-year reunion approaches. Happy to start her new job as an appraiser, Jolie begins with the home of Mrs. Riordan, whose son Michael attended Jolie’s high school class, only to walk in on the woman lying in bed dead.

The police immediately jump to the conclusion that Michael has killed his mother by first drugging her with the muscle relaxant for his back pain and then strangling her when the overdose of the drug fails to kill her. Refusing to give any evidence for their having arrested Michael, the police remain complacent and do not look further into the case. Thus, convinced that Michael would never have hurt his mother, Jolie decides to find the answer for herself, despite the strong objections of both police and Michael himself. Jolie’s life gains further complications when Joe Pedone, a man connected to a money lender owed over $80,000 by Jolie’s estranged husband, Robbie, comes after her to demand that she pay the debts owed by him, and his threats become serious.

The biggest strength of this book is its unique, round characters. Jolie gets reunited with Ramona, the main clerk at the stationers Purple Cow, who clues her in to any news or what others have been saying, since Aunt Madge has a strong opinion against any form of gossip. The character who really comes alive is Scoobie, Jolie’s chief friend the year she attended high school in Ocean Alley, whom she would sneak out after bedtime to meet on the boardwalk. Scoobie has lived a very difficult life, turning to drugs and alcohol at his worst points but getting clean with the help of AA. The character of Jolie’s husband, Robby, who lets his own addiction get the better of him to the extent that he turns criminal, shows the contrast of what Scoobie could have become. Michael wavers between behaving romantically toward Jolie and pulling away from her. While he is presented as the romantic hero with a budding relationship with Jolie and the unfairly accused whom Jolie must free from suspicion, he still came across as a complex character, not entirely a good guy.

I also enjoyed the animals in the book. Mr. Rogers and Miss Piggy, a pair of dogs who love prunes so much that they will destroy a plastic bowl in order to get to the prunes, belong to Aunt Madge. But then Jolie brings with her Jazz, her cat who initially shows a lot of fear of the dogs, but by the end of the book, Jazz actually chases the canines instead of the other way around!

My one complaint about this book is the portrayal of the police vs. the portrayal of the civilian Jolie when it comes to investigating the case. The police come across as incompetent, making an arrest of Michael with no good evidence and even a poor motive. I do not like seeing the police shown in such a poor light. Jolie must take over the investigation because no one else is doing so. However, even her own efforts do not provide a very strong mystery in general.

The audio version of this book is performed by Paula Faye Leinweber, who narrates the book from Jolie’s perspective very ably. Speaking clearly, she uses a broader, more universal accent instead of a New Jersey accent that Jolie would normally use. However, many readers would have difficulty understanding such an accent, so I think the decision to use the more common accent was a responsible one.

Appraisal for Murder shines with flavor. The mystery has interesting elements, though it could be stronger. But the characters and culture of the community make up for that in helping to make this a very enjoyable book. I give this book four stars.

Yes I Would recommend ths audiobook. It was a pleasant read and held my interest

What was one of the most memorable moments of Appraisal for Murder?

There were many. The introductions to Such a variety of characters. The back story That brought Jolie back to the shore was a great start to this fun book.

What does Paula Faye Leinweber bring to the story that you wouldn’t experience if you just read the book?

Easy listening. I was able to plug my head phones in and sit back and enjoy the trouble Jolie and her friends got caught up in.

You could. It did not fit into my schedule in one sitting though.

I look forward to more audio books with this character.

Would you try another book from Elaine Orr and/or Paula Faye Leinweber?

Not sure if it's the narrator or the audio, but can't hear most of it due to extreme fluctuations in the volume.

I could not understand the narrator's male's voice

The story was pretty good but the Narrator ruined the whole thing. When she used her "male" voice it was so quiet I couldn't understand her.

Would you be willing to try another one of Paula Faye Leinweber’s performances?

Did Appraisal for Murder inspire you to do anything?

Would you ever listen to anything by Elaine Orr again?

Yes, with a different narrator.

Anger. I liked the story ,but the narrator ruined it. Her male voices were terrible, sometimes not understandable.

I read a few reviews for this book and they seemed positive. It was quoted as being funny, with interesting characters and a quick read. I did not find the same in this book. The characters were mildly interesting and the pacing was slow. The mystery was typical with all of the formulaic points. The best part of the book was the first few pages. After the lead character finished talking about her exhusband, I lost interest in the book. The narrator didn't help. She mumbled at the end of sentences which made it difficult to follow the story. I can't recommend this book to anyone.

Narrator is not the right age

The biggest issue for me was that the narrator is clearly in her late 40's/50's but the main character (who speaks in first person) is supposed to be about 27. Her voice of the main character is also pretty monotone. It just doesn't fit the bill at all. They really should have chose someone better. Perhaps if it wasn't written in first person this wouldn't be such an issue but it really ruins it all for me. The story could otherwise be good though