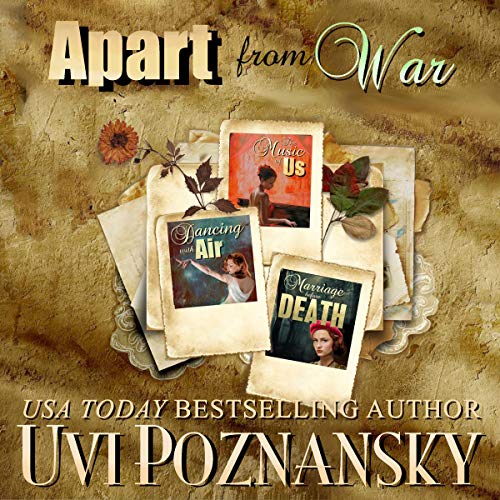 This bundle contains three volumes of the Still Life with Memories series, featuring the love story and adventures of Lenny and Natasha during WWII:

The Music of Us

In 1970, Lenny can no longer deny that his wife is undergoing a profound change. Despite her relatively young age, her mind succumbs to forgetfulness. Now, he goes as far back as the moment he met Natasha during WWII, when he was a wounded warrior and she a star, brilliant yet illusive. Natasha was a riddle to him then, and to this day, with all the changes she has gone through, she still is.

“Digging into the past, mining its moments, trying to piece them together this way and that, dusting off each memory of Natasha, of how we were, the highs and lows of the music of us, to find out where the problem may have started?”

To their son, Ben, that may seem like an exercise in futility. For Lenny, it is a necessary process of discovery, one that is as tormenting as it is delightful. He often wonders: Can we ever understand, truly understand each other - soldier and musician, man and woman, one heart and another? Will we ever again dance together to the same beat? Is there a point where we may still touch?

Fooling Nazi espionage may cost Lenny the trust of the girl who captured his heart. Will Natasha discover his secret D-Day reports, disguised as love letters to another woman?

In these letters, Lenny gives the enemy misleading information about allied plans. Once Natasha arrives in London, he takes her for a ride on his Harley throughout England, from the White Cliffs of Dover to a village near an underground ammunition depot in Staffordshire. When he is wounded in a horrific explosion, she brings him back to safety, only to discover the other woman’s letter to him. Will love survive the test of war?

In the past Natasha wrote, with girlish infatuation, “He will be running his fingers down, all the way down to the small of my back, touching his lips to my ear, breathing his name, breathing mine. Here I am, dancing with air.” In years to come, she will begin to lose her memory, which will make Lenny see her as fragile. “I gather her gently into my arms, holding her like a breath.” But right now, she is at her peak. She is ready to take charge of the course of their story.

After D-Day, her photograph appears on the "Most Wanted" Nazi propaganda posters. Who is the girl with the red beret? She reminds him of Natasha, but no, that cannot be. Why does Rochelle step into his life when he is lead by SS soldiers to the gallows? At the risk of being found out as a French Resistance fighter, what makes her propose marriage to a condemned man?

What listeners say about Apart from War

Excellent addition to the series

Excellent character driven stories. Enjoyable and exhilarating. tragically heartbreaking but beautiful at the same time. The lengths we go for love is never defined and Lenny and Natasha prove this. The narration was excellent. Very moving and exciting. I requested a free copy of this audiobook and I am leaving a voluntary and honest review.

Three reviews follow: Marriage Before Death Ms. Poznansky has done it again, but this time—and I don’t say this lightly—she has written my favorite book to date in her stable of literary gems. Marriage Before Death continues in the Still Life With Memories series, which paints stories of the lives of Lenny and Natasha Kaminsky. (Book 1: My Own Voice, Book 2: The White Piano, Book 3: The Music of Us, Book 4: Dancing with Air) In this story, Ms. Poznansky eloquently shifts from her previous genre of literary stories full of romance, to a wartime suspense story, still, however, continuing with the love story of our beloved couple. I have always adored Ms. Poznansky's evocative writing, but this time she whisked me into the era of WWII French Resistance Fighters in 1944. And what an adventure it was! I trembled in my virtual boots beside Lenny when he was captured by Nazi soldiers, “this close” to being executed. He stood in a line of captured soldiers and resistance fighters, waiting to be sent to one group or the other. One group would be immediately hung in the gallows that loomed nearby, the other would be used in some fashion to help the Nazi cause. The tension was riveting. I listened to the audiobook version of this fascinating story, told by the talented Mr. Don Warrick. His male character voices are outstanding, and his accents—whether it be British, French, German, Jewish, or American, the rendering is brilliant and on target. The female voices aren’t quite as effective, in my humble opinion, but honestly, one can’t fault a deep, stentorian narrator for not being able to completely sound like a woman. ;o) Thank you, Ms. Poznansky, for allowing us to continue to believe that America still produces great writers who judiciously craft each sentence, and who can tell a great story at the same time. - Highly recommended by Aaron Lazar, multi award-winning author. *** Dancing with Air Dancing with Air by Uvi Poznansky is a lyrical tour se force set in World War II in England. Poetic, evocative, and at times langorously delicious, the new audiobook version adds even more to the sense of "being there" along side the delightful characters who, by the way, span a series of novels over the course of their lifetimes. One of the lovely gifts embedded in this series is a collection of beautiful poems set to music to represent songs of the era. Mr. Warrick, the phenomenal narrator of this story, creates some memorable tunes with his amazing voice. Do yourself a favor and download this romantic adventure. Then sit back, push play, and let the beauty wash over you. Highly recommended for all book lovers! *** The Music of Us A Lyrical Gift to Readers When I write a book review, I don’t like to rehash the plot—that information is easily accessible in the book description. What I prefer is to share how the book made me feel, and what I valued between its covers. Uvi Poznansky is a literary tour de force in a contemporary age when the quality of writing often takes a back seat to the quick thrill, or to be more precise, the quick buck. She writes as she paints, with careful, vibrant strokes of amazing clarity and color. Whether you are a reader or writer, teacher or student, you owe it to yourself read her work. You will be transported to a world where life is examined from a poet’s point of view, where you live in vignettes so real that you can’t help but love and care for the characters. I have read all of Poznansky’s work, but this book resonated more deeply with me than all the previous titles, which I truly enjoyed. I suppose it is because I am an inveterate romantic. I ached for the young, “flashback” characters to come together. I shouted at them to wake up and smell the coffee when they missed opportunities to get together, and I reveled in the sweet endings when they finally connected. The atmosphere of the 1940s is beautifully portrayed, and on a secondary level only to the (mostly) unrequited love story, it was my next treasured experience while reading this book. I loved the sounds and sights of the era, the music, the cars, and the lifestyles so well depicted. It was a fascinating dip into the life of those dynamic times. If you are aching for a lyrical read, for something above and beyond the usual offerings in the field of fiction, I highly recommend you pick up a copy of Uvi Poznansky’s The Music of Us. --Aaron Paul Lazar