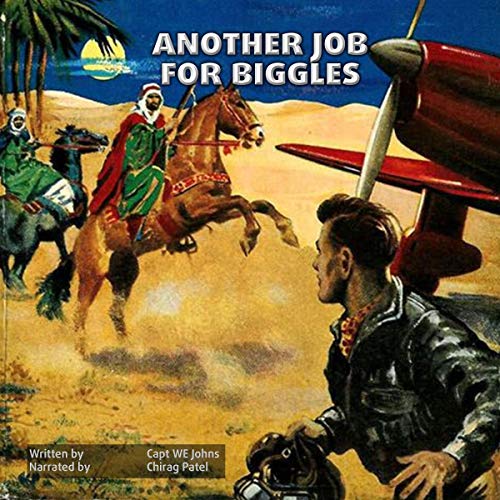 Another Job for Biggles

An action packed adventure across Arabia in search of a new hashish.

A grave peril has reached London. Air Commodore Raymond of Scotland Yard has discovered a new drug, one being used for robberies and more. Gurra is a risk to civilization itself, and only one man can be entrusted to save it. Can Biggles find the source before this new drug scourges civilisation?

Join the newly-promoted Detective Air-Inspector Bigglesworth as he is sent on a mission by Scotland Yard in the Arabia’s infamous Rub Al Khali, the Empty Quarter. Accompanied by his old flying buddies Ginger and Bertie, Biggles travels to Aden, in order to fly out across the savage desert in search of a mysterious oasis, the only known source of a dangerous new drug. There they find the trusty Zahar, who has been betrayed and left to die by the servant of a perfidious crimelord.

Can Biggles and the gang survive the perils of the desert and achieve their mission of saving civilisation from this terrible new drug? Facing perils from dust storms and poisoning to drought to capture and mortal danger, Captain Biggles shows off the best of british nobility and grit in this fast-paced adventure.

First Published in February 1951. Originally published in seven monthly parts as "Biggles in Arabia" in Collins Magazine for Boys and Girls (February to August 1950).

What listeners say about Another Job for Biggles

Good story let down by the narration

The narration alternates between a patronising lilting style, and the adoption of peculiar tones for some characters. Commodore Raymond sounds like he's slurring his words past a rather large gobstopper. I abandoned the narration after 20 minutes.

Great book to read and very entertaining. Recommend for all Biggles fans. A good book to read on a cold and and wet afternoon.

This is a great Biggles!

The story is excellent, like all Biggles books, but the narrator’s, (Chirag Patel) speech is rather slow, and it did not sound super good until I turned the audio speed to 1.1 - 1.2.

I am not objective concerning this piece, because I am a big fan of Biggles since my childhood.